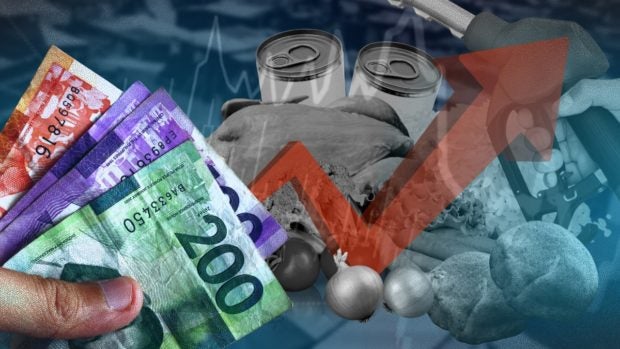 MANILA, Philippines—Wage increases in most regions, including Metro Manila, finally took effect last June, but a local think tank said Filipino workers are still having a tough time keeping up.

As listed by the National Wages and Productivity Commission (NWPC), the minimum wage in Metro Manila, which is the highest in the Philippines, is now P570, a P33 increase from the previous P537.

Last June, Silvestre Bello III, who was still leading the Department of Labor and Employment then, said minimum wage earners, including domestic workers, will benefit from the series of wage hikes.

But with inflation hitting an all-time high of 6.9 percent last month, Ibon Foundation said real wages for millions of Filipinos, which is the pay a person can expect to receive once inflation is taken into account, are falling.

READ: September inflation revs up to 6.9%

As stressed by the Philippine Statistics Authority (PSA), the latest readout was because of the faster rate of increases in food and non-alcoholic beverages (7.4 percent); housing, electricity and gas (7.3 percent); and restaurants and accommodation services (4.6 percent).

Inflation last month accelerated from 6.3 percent in August. The PSA said this is the highest recorded readout since October 2018, when inflation hit 6.7 percent because of a spike in the price of rice.

It said the share of food and non-alcoholic beverages in the latest increase was 70.6 percent, while housing, electricity and gas, and restaurants and accommodation services had a share of 18.2 percent and 6.5 percent, respectively. 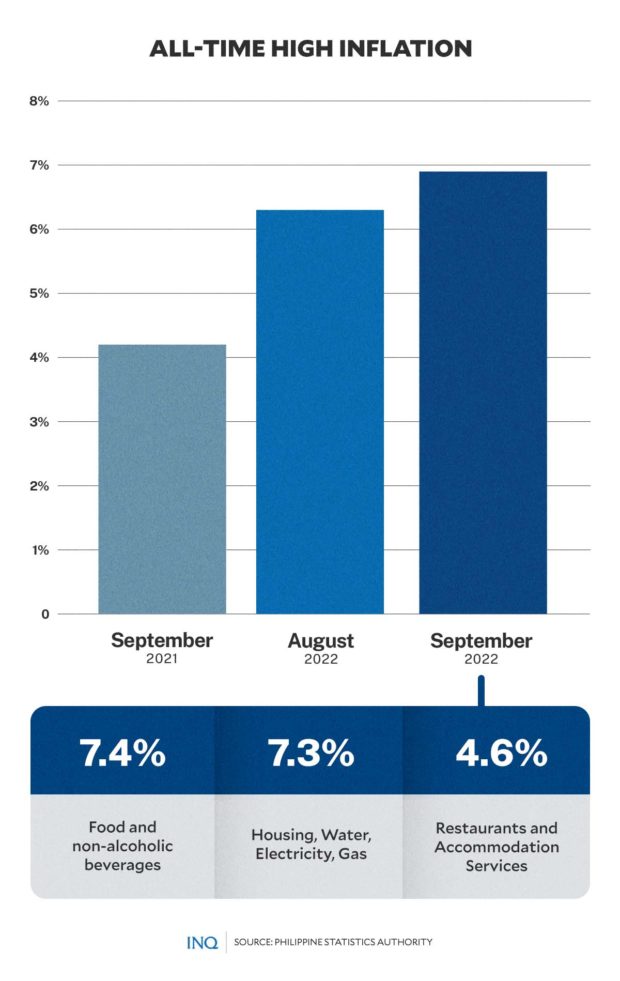 Becoming out of reach

The local think tank previously explained that when inflation drives the real value of wages to all-time lows, basic food and transportation services are expected to be almost out of reach, especially for the poor. 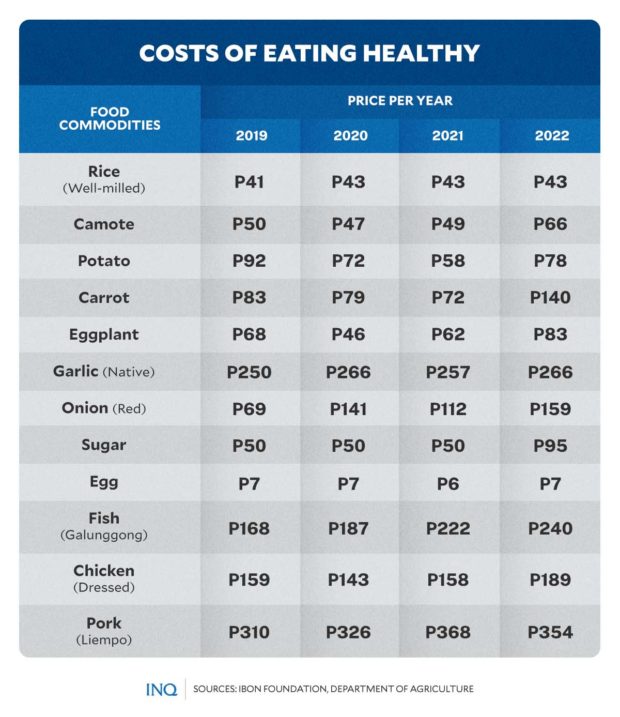 The price of galunggong likewise spiked to P240 from P168 a kilo in 2019, while dressed chicken and pork liempo are now worth P189 and P354 a kilo, Ibon Foundation said.

To control inflation, the National Economic and Development Authority (NEDA) advised consumers not to buy excessively, especially since inflation is expected to remain elevated throughout the rest of the year.

Socioeconomic Planning Undersecretary Rosemarie Edillon told dzBB TV that consumers can control the acceleration of the readout, stressing that “inflation means the demand is high, but there are fewer products being purchased.” 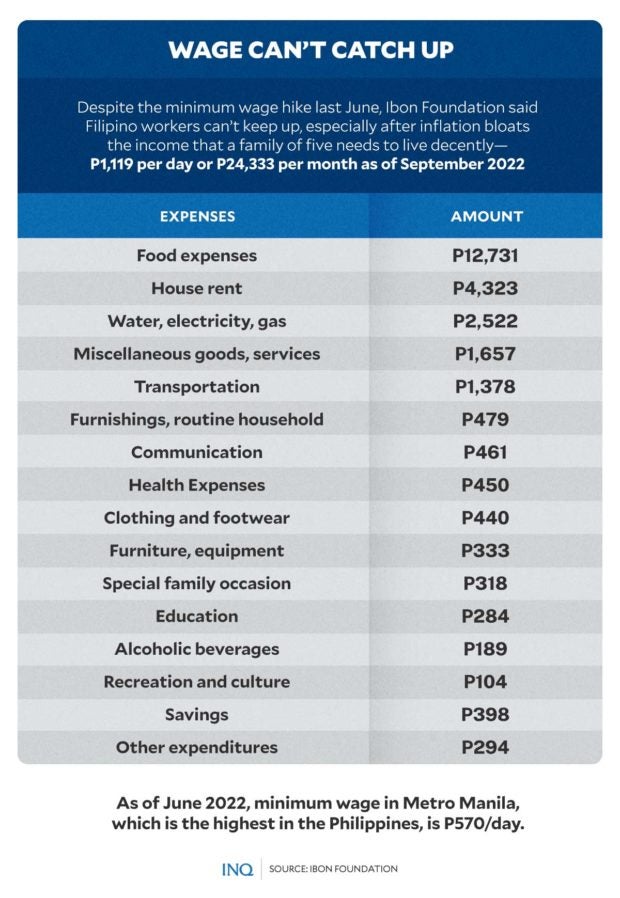 Edillon stressed that on the demand side, consumers should lessen excessive purchasing, while production is being increased. She said the spike in prices is driven by external reasons that are “out of our control.”

But Sonny Africa, executive director of Ibon Foundation, asserted that there is really something wrong when over three to four million Filipino families living hand to mouth are among those being told by the government to spend less.

He said, the statement of NEDA likewise confirmed why economic managers won’t give ayuda—”for them, this (ayuda) is just needless inflationary pressure.”

Ibon Foundation said the recent oil price hikes contributed to the soaring prices of basic goods and services. As a result, Filipino workers are still struggling to make ends meet even with the hike in minimum wage last June.

It stressed that in Metro Manila, the P570 minimum wage is barely half, or 51 percent, of the P1,119 estimated living wage needed by a family of five to live decently as of last month.

This indicates that the P570 minimum wage in the region is not enough to meet the needs for a decent living in the region, which requires P1,119 a day or P24,333 a month, the local think tank said. 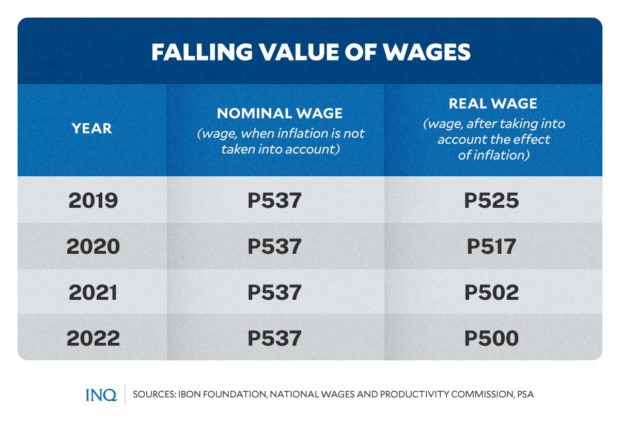 The remaining amount was broken down to P479 for furnishings, routine household; P461 for communication; P450 for health expenses; P440 for clothing and footwear; P333 for furniture and equipment; P318 for special family occasion; P284 for education; P189 for alcoholic beverages; P104 for recreation and culture; P398 for savings; and P294 for other expenses.

This, while rising joblessness and falling incomes have increased the number of families without savings since the start of the year—increasing by a million to reach 19.4 million as of this year’s third quarter.

Based on a latest Pulse Asia survey, which was conducted from Sept. 17 to 21, controlling inflation is still the top concern of most Filipinos, with 66 percent of 1,200 respondents saying that inflation is the biggest problem that should be addressed.

“This is the prevailing view in all geographic areas and socio-economic classes (56 percent to 81 percent and 51 percent to 71 percent, respectively),” Pulse Asia said.

As revealed in the result of the same survey, the administration of Ferdinand Marcos Jr. received high approval ratings for its handling of key national concerns, except for its response to inflation.

Out of 13 issues, Pulse Asia said most Filipinos viewed issues related to the economy as top concerns—controlling inflation (66 percent), increasing the pay of workers (44 percent), creation of jobs (35 percent), and poverty reduction (34 percent).

It stressed that with regard to controlling inflation, which is the top concern of over half of Filipinos—66 percent—the administration of Marcos got a minus 11 percent net approval rating.

Given the soaring prices of basic goods and services and falling real value of wages, the head of the House Committee on Labor and Employment vowed to discuss the call for higher wages soon.

Last month, the progressive Makabayan bloc filed a bill that seeks to set a “living” minimum wage for workers, stressing that regional wages are “irrational.”

“It shall be of such amount which is sufficient for a worker to provide his/her family the basic and necessary expenditures that take into consideration all of his/her family’s physiological, social and other needs, so as to enable them to live and maintain a decent standard of living beyond mere subsistence, with adequate allowance for social security,” House Bill No. 4898 read.

Read Next
Tolentino to DOST: Why science fairs, contests for students not promoted well?
EDITORS' PICK
Lawmakers eyeing more changes in Maharlika plan
How not to retire as an ex-president
Hidilyn Diaz wins only gold missing from her collection
Shop smarter with vivo’s big 12.12 holiday deals
The vivo Y02 is now available in the Philippines for only PHP 5,299
House energy committee chair Arroyo bats for cheap electricity
MOST READ
Jovit Baldivino, ‘Pilipinas Got Talent’ winner, dies at 29
LPA enters PAR, to likely strengthen into tropical depression in coming days – Pagasa
Andi Eigenmann, family in Manila for a quick visit; Ellie dines with grandma Jaclyn Jose
11 Filipino imports named to Japan B.League Asian All-Star team
Don't miss out on the latest news and information.