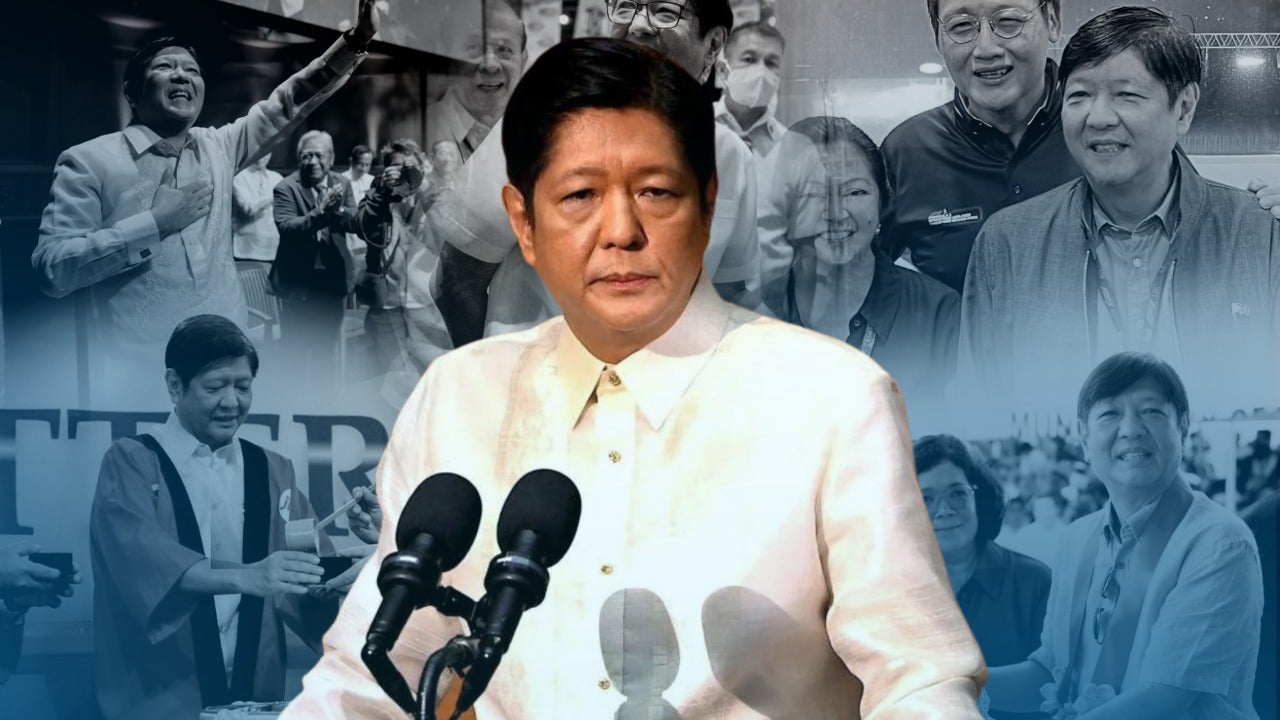 MANILA, Philippines—Right on track or not?

As the first 100 days of President Ferdinand Marcos Jr. will come to an end on Saturday (Oct. 8), his cousin Speaker Martin Romualdez said the Philippines was “sprinting steadily.”

Romualdez said in Marcos’ first 100 days in office, the Philippine economy has bounced back from the ravages brought by the COVID-19 crisis and already reached the first stage to complete recovery.

Marcos himself said he managed to establish a “functional” government with “the best and the brightest” officials who know what his administration was trying to achieve with regard to “strict economic targets.”

The President also said his state visits to Singapore and Indonesia last month boosted trade and encouraged investment in some industries. The Office of the Press Secretary said the state visits yielded $15 billion worth of business deals.

Pampanga Rep. Gloria Macapagal-Arroyo, who was president for nine years, said Marcos, in the wake of the health and economic crises, “reassured everyone by assembling an impressive economic team.”

Is the rosy picture real, however? 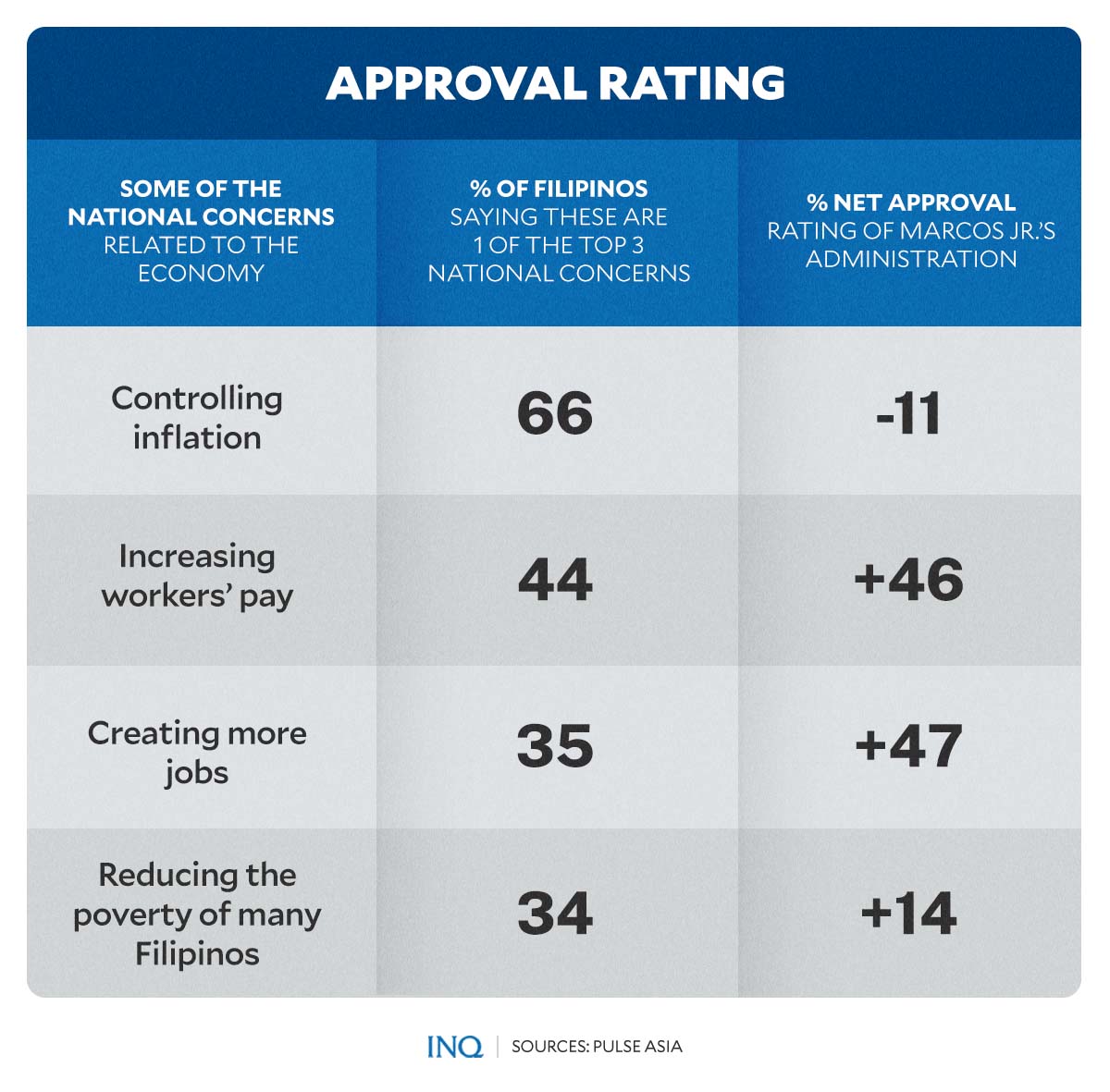 According to results of a new Pulse Asia survey, which was conducted last Sept. 17 to 21, the administration of Marcos received high approval ratings for its handling of key national concerns, except for its response to inflation.

Out of 13 issues, Pulse Asia said most Filipinos viewed those related to the economy as top concerns—controlling inflation (66 percent), increasing the pay of workers (44 percent), creation of jobs (35 percent), and poverty reduction (34 percent). 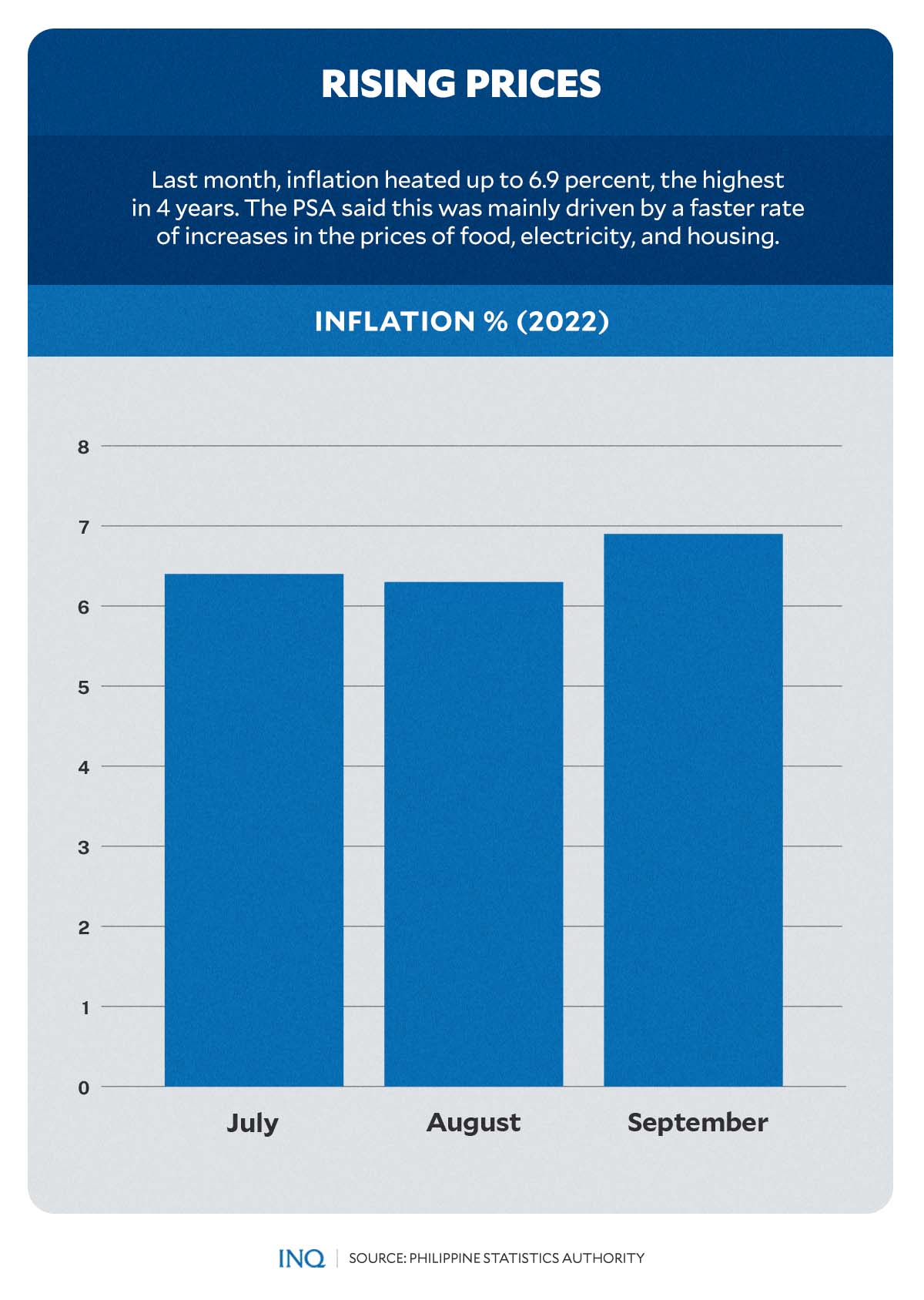 However, Pulse Asia stressed that with regard to controlling inflation, which is the top concern of over half of Filipinos—66 percent—the administration of Marcos got a minus 11 percent net approval rating.

This, as out of 1,200 respondents, 42 percent disapproved of the government’s response to inflation, 31 percent approved, while 27 percent were not certain of their view.

Sonny Africa, executive director of the think tank Ibon Foundation, said the first 100 days are critical for every administration, stressing that it is a chance to transition from the old to the new and really a time for the president to set directions.

“The first 100 days is exactly when a real leader would roll out ideas about the economy that had been thought of as part of preparing for public office, especially for the presidency,” he told INQUIRER.net.

Marcos set himself a high standard when he promised a “comprehensive, all-inclusive plan for economic transformation” at his inaugural address last June 30, said Africa, an economist.

To recall, Marcos also listed in his State of the Nation Address last July 25 these economic objectives:

Marcos, who won the presidency by a landslide last May 9, had attributed economic growth to the reopening of the Philippine economy after the lifting of COVID restrictions.

But Africa stressed that with how the economy currently looks, “bold and new initiatives” were needed, saying that the situation is “extremely unusual and demands so much more than business-as-usual economic policies.”

“Old and passive economic thinking is part of the problem,” he said.

He said based on data from the Philippine Statistics Authority (PSA) last June, agriculture and manufacturing have fallen to their smallest shares of the economy in at least seven decades.

Likewise, the average annual job creation fell to its weakest in over three decades, while the overstretched lockdowns and tepid fiscal response only made things worse, Africa said.

This, as “joblessness is growing including millions in disguised unemployment, and household incomes are collapsing, while external conditions are rapidly deteriorating with soaring commodity prices and another looming global recession.” 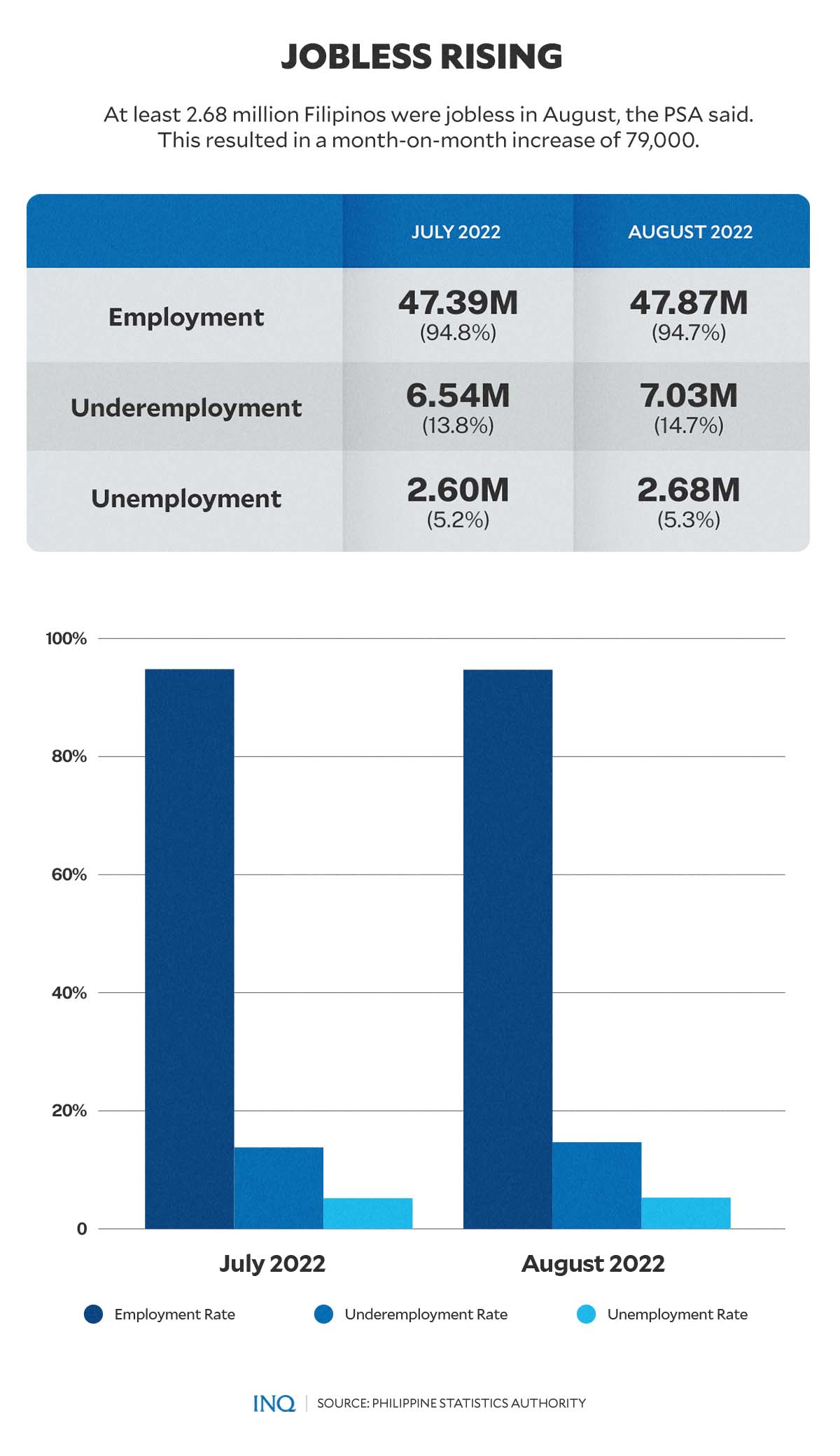 Based on latest data from the PSA, the inflation rate heated up to 6.9 percent last month, higher than 6.3 percent in August and 6.4 percent in July, mainly driven by a faster rate of increase in the prices of food, electricity, and housing.

The high readout, National Statistician Dennis Mapa said, was last seen in September and October 2018 at the height of the spike in the price of rice. This time, however, it was because of fast-increasing prices of eggplant, tilapia, and refined sugar.

Africa said Marcos and his economic team “are burying their heads in the sand by insisting that the economy is recovering well.”

“They mistook the simple rebound from reopening as the start of recovery,” he said. 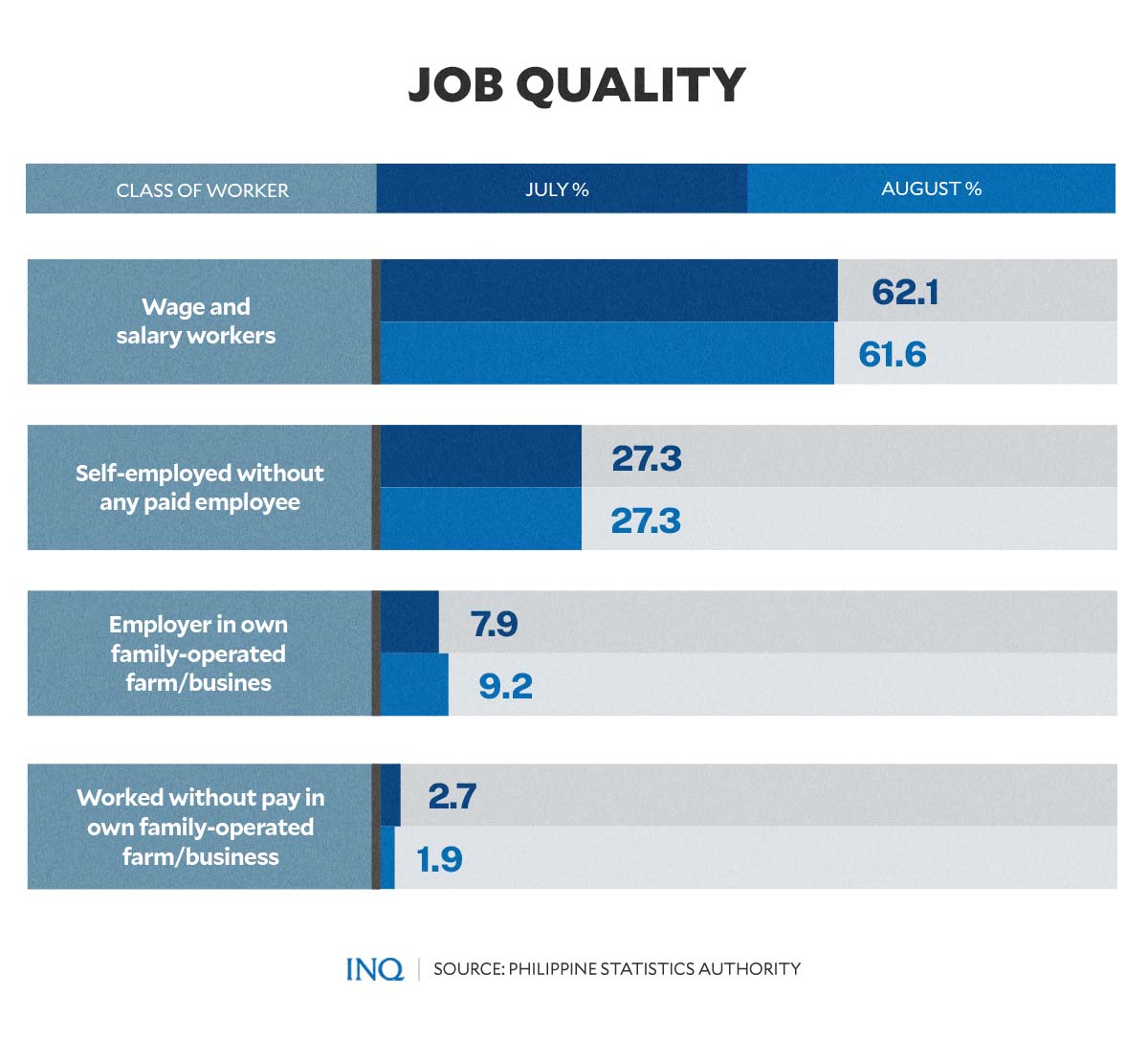 Based on the latest Labor Force Survey by the PSA, at least 2.68 million Filipinos were jobless in August, resulting in a month-on-month increase of 79,000 jobs lost compared to 2.60 million in July.

The PSA stated that by class of workers, 61.6 percent were wage and salary workers, 27.3 percent were self-employed without any paid employee, 1.9 percent were employers in own family-operated farm or business, and 9.2 percent were unpaid family workers.

Africa said the official unemployment figures are failing to capture the true extent of joblessness. Some 2.7 million are officially reported as unemployed.

“Yet official employment figures peculiarly count 4.4 million unpaid family workers as employed—this is even more than twice as much as the 2.1 million reported during the height of lockdowns in April 2020.”

Ibon Foundation earlier stressed that while employment seemed to have recovered with a 3.7 million increase since January 2020 to 46.3 million by December 2021, “most of this supposedly additional employment was of very poor quality work.”

The situation has only marginally improved in 2022 since as of July 2022, Ibon Foundation estimated that some 34.6 million or 72.9 percent of total employment consist of self-employed, informal work, and workers in informal establishments.

For Africa, the government is being “extremely shortsighted with its insistence on fiscal consolidation and balanced budgets as if these are ends in themselves.”

“They should be reminded that these short-term financial indicators are less important than fiscal conservatism’s immediate effect on people’s welfare and longer-term stifling of growth and development,” he said. 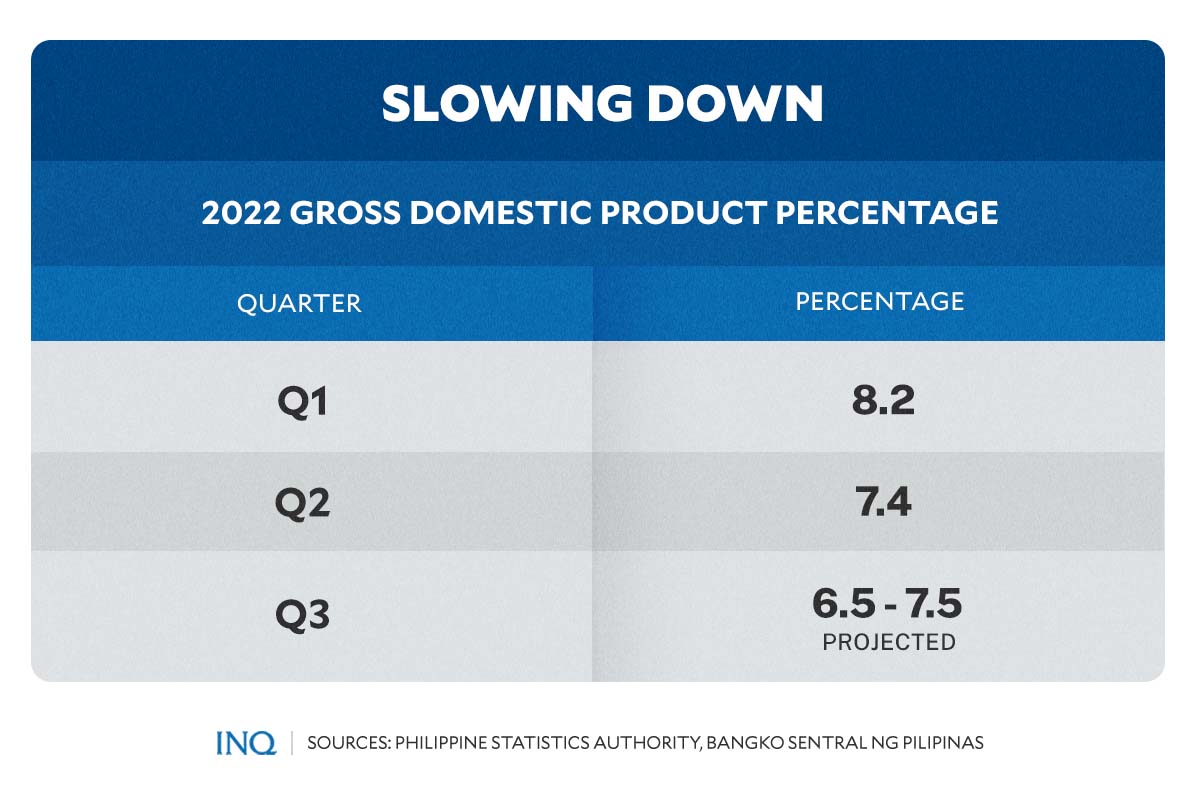 Africa stressed that too many Filipinos are “needlessly suffering.”

According to him, growing joblessness and falling incomes have increased the number of families without savings since the start of the year—increasing by a million to reach 19.4 million as of the third quarter of the year.

“Accelerating inflation means even less consumption for these millions of families who do not have any buffers to compensate for any rise in prices of basic goods and services,” he said.

Based on data from the PSA, the economy grew by a stronger-than-expected 8.3 percent year-on-year in the first quarter of 2022, but this fell to 7.4 percent in the second quarter because of soaring inflation.

READ: GDP growth soars to 8.3 percent but next admin warned vs reform reversal

Last August, the Bangko Sentral ng Pilipinas (BSP) said it was expecting GDP decelerating further in the next quarter, pointing out that GDP is expected to settle within the revised 6.5 percent to 7.5 percent target.

For Africa, bold fiscal measures are needed. Instead of conservatism, there needs to be proactive countercyclical fiscal policy. He said urgent demand-side interventions include meaningful ayuda, or direct aid, expanded nutrition, health and education programs, and increased pensions.

“Supply-side measures demand more support for farmers, fisherfolk and micro, small, and medium enterprises that are folded into expanded public employment programs and with a view to long-term structural transformation.”

He said complementary out-of-the-box monetary and financial measures are critical. Larger but productive deficits can be financed by a billionaire wealth tax, higher income taxes on the wealthy and large corporations, and selling treasury bonds to the BSP.

“Debt will not be a problem if these are used productively to make the economy grow out of debt,” he said.