Tolentino to DOST: Why science fairs, contests for students not promoted well? 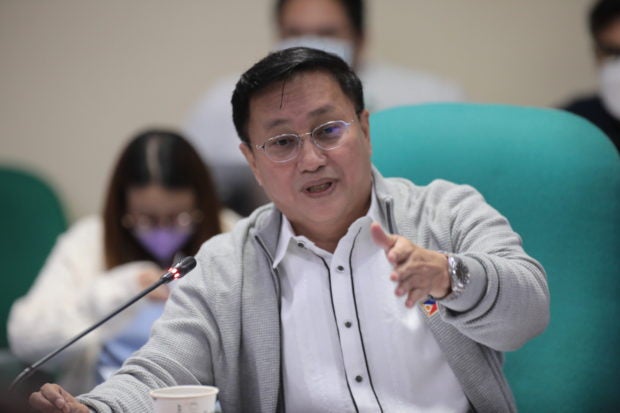 MANILA, Philippines — The Department of Science and Technology (DOST) has been questioned at the Senate as to why its programs for finding and developing young Filipino scientists through fairs and contests are not marketed well, given how important it is for the country.

During the deliberations for the DOST’s proposed 2023 budget before the Senate finance subcommittee on Monday, Senator Francis Tolentino asked DOST Secretary Renato Solidum Jr. whether the government has any programs like a science competition for the whole country, similar to the Palarong Pambansa — a yearly sporting event for young athletes.

In response, Solidum said they have such programs.

“We have quizzes, and during the Science and Technology Week, usually the Philippine Science High School system would involve non-Pisay high schools to compete. Meron din tayong mga (We also have some students) within Pisay, they actually go out and compete,” Solidum said.

“We have various contests for the tech – we have the SEI’ imake, wemake,'” he added.

The Senator suggested that DOST partner with the Department of Education (DepEd) and the Commission on Higher Education (CHED), so that the country can discover the next generation of scientists — like the University of the Philippines’ William Kevin Abran who made an experiment about the rotation of dumbbell-shaped objects in space, a principle that astronauts in space would use.

(We coordinate with CHED, and everything.  So we would have a singular program, and everyone excelling at the sciences would go together.  Who knows, maybe we can find another student like Abran, who is good at his craft.)

Solidum then said that the department has other programs or contests that are not necessarily geared toward astronomy.

Tolentino also inquired how much funding the DOST would need if it would hold a science olympics in the country. Philippine Science High School System Executive Director Lilia Habacon said that they spent around P15 million as a ballpark figure for their own four-day science camp.

“Sir, we do conduct some science research summit limited to Philippine Science High School participants and usually we spend about P15 million, it’s about one week. And then, we also have another program which we call, ‘Kids Innovation Camp and Kids Innovation Challenge,'” Habacon said.

“In the Kids Innovation Camp, we teach them some problem-solving skills such as the engineering process, and the design process, that’s a four-day lecture. Pero, doon po, Mr. senator, ang output are posters lang [But for that particular matter, the output is just for postering],” she added.

After the four-day lecture, Habacon explained that the students from across the country would go back to their own areas and work on their project, with the help of a mentor, for nine months.

Upon including programs like the robotics training and the “imake, wemake” which costs P8 million each to organize, as other contests organized by the Science Education Institute and the Philippine Council for Industry, Energy, and Emerging Technology Research and Development, Tolentino concluded that the DOST might need around P40 million.

He also asked for a concept paper about a contest or a science olympics that would be more inclusive, saying the contest that Habacon mentioned only included students under the Philippine Science High School System and other public science schools.

“Can you give us a concept paper next week? On how we can operationalize this, not just coming from the secondary level but even college. We have the Mapua Institute of Technology, then we have other students from other areas.  Like what Senator (Robinhood) Padilla said, it’s like an expo, where the works of young Filipino scientists are displayed,” Tolentino said in Filipino.

“We would have one program.  Because if it is limited to the Philippine Science High School, [what about] La Salle which can also build cars and robots?  Even others can make drones that are able to talk.  So, if we can just submit a concept in a paper and we’ll try to put forward something that would be meaningful,” he added.

Filipinos have excelled at science for a longest time, but the country has faced in the past an exodus of talent due to higher demands and benefits abroad.

However, there are sectors optimistic that the current administration would focus on bringing back Filipino talents, as President Ferdinand Marcos Jr. said he was a ‘frustrated scientist’ who believes in the benefits of science and technology. With reports from Irish Perez, INQUIRER.net trainee

Read Next
‘Unnerving’: Instead of trips to journalists’ homes, cops told to think of other safeguards
EDITORS' PICK
Shop smarter with vivo’s big 12.12 holiday deals
The vivo Y02 is now available in the Philippines for only PHP 5,299
How not to retire as an ex-president
Hidilyn Diaz wins only gold missing from her collection
House energy committee chair Arroyo bats for cheap electricity
Lawmakers eyeing more changes in Maharlika plan
MOST READ
Jovit Baldivino, ‘Pilipinas Got Talent’ winner, dies at 29
Andi Eigenmann, family in Manila for a quick visit; Ellie dines with grandma Jaclyn Jose
LPA enters PAR, to likely strengthen into tropical depression in coming days – Pagasa
11 Filipino imports named to Japan B.League Asian All-Star team
Don't miss out on the latest news and information.