With no monkeypox vaccine at home, frustrated Mexicans go abroad 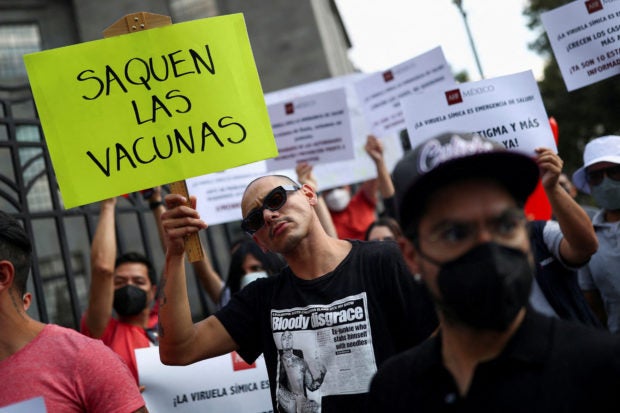 FILE PHOTO: An activist holds a sign reading “Release the vaccines” during a protest to call for a stronger response by the government to the monkeypox crisis, outside the Health Secretary building, in Mexico City, Mexico, Mexico, July 26, 2022. REUTERS/Edgard Garrido/File Photo

MEXICO CITY — As monkeypox continues to impact gay and bisexual men in dozens of countries around the world, at-risk Mexicans are going abroad for vaccines they say their government has not bothered to make available at home.

Mexico ranks ninth globally in total cases, according to the World Health Organization, but officials have not announced plans to acquire vaccines even as other Latin American countries receive shipments.

“It’s been a long journey to find a vaccine,” said Alberto Herbel, a communications professional and nightlife producer who flew from Mexico City to Los Angeles this month for a two-day stay to get vaccinated after failed attempts in France and Germany.

Herbel, 38, said he wanted the vaccine because half of his friends currently have or have had monkeypox.

The viral disease, which is overwhelmingly but not exclusively spreading among gay and bisexual men, is rarely fatal but can cause painful sores that make basic bodily functions difficult for weeks.

The U.S. Center for Disease Control (CDC) recommends vaccines for at-risk individuals and the Pan American Health Organization (PAHO) has underscored they are an “important tool” in stemming transmission, though the shots are in short supply globally.

“I didn’t see a plan from the government,” he said. “I had to do something for myself.”

Mexico’s health ministry did not respond to Reuters’ questions about plans to acquire vaccines.

“It was quick. They didn’t ask for anything,” said Lara, 41, who like others plans to make a second trip to get the recommended second dose.

Mexico’s government has reported 2,147 confirmed cases of monkeypox since May, a number advocates in the gay community say far undercounts cases.

Mexico is not among 14 countries that have committed to purchasing vaccines through PAHO, which acquired 130,000 doses of the Danish manufacturer Bavarian Nordic’s JYNNEOS vaccine. Brazil and Chile received first shipments earlier this month.

Clinical trials to evaluate JYNNEOS’ effectiveness at preventing monkeypox are ongoing. The vaccine is approved for monkeypox in the United States, where a CDC study observed that monkeypox incidence was 14 times higher among unvaccinated males compared with those who had received a first dose of JYNNEOS.

Ricardo Baruch, an LGBT health researcher, says he “easily” knows 40 people who have left Mexico for the vaccine, but worries the situation will exacerbate inequalities in the gay community.

“Those with visas and money will get vaccinated and those without will have to resign themselves to eventually getting monkeypox,” Baruch said.