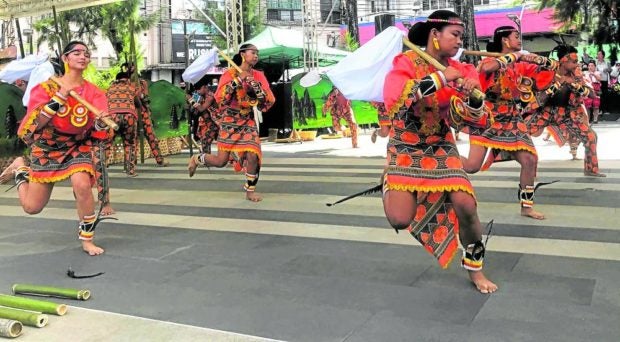 DANCING IN THE STREETS | AGAIN Dancers perform a popular choreography from the Laga Festival in Lagayan town, Abra, during a Cordillera “Festival of Festivals” staged at Baguio City’s Malcolm Square on Saturday. The event was aimed at demonstrating the Cordillera region’s readiness to welcome tourists. (Photo by VINCENT CABREZA / Inquirer Northern Luzon)

The festival showcased selected performances of highland events that have not been staged since the COVID-19 pandemic broke out in 2020.

Cordillera dancers carried out signature choreography from the annual Laga Festival that promotes the bamboo culture in Lagayan, Abra province; and the Isneg Say-am Festival, which celebrates the Feb. 14 Foundation Day of Apayao province.

They also performed dances from the Gotad Ad Ifugao, which is staged annually by the home of the world-recognized rice terraces; the Lang-ay Festival of Mountain Province, which also has its own terraced rice farms; and Kalinga’s Bodong Festival.

Dances from Benguet’s Adivay Festival were also staged, as well as street dancing that draws foreign and domestic visitors to the summer capital during each year’s staging of the Panagbenga Baguio Flower Festival. The Flower Festival resumed this year without street dancing and the grand float parade as a necessary precaution because of the prevailing pandemic.

Acting Mayor Faustino Olowan said the performances were held at Malcolm Square along downtown Baguio to “demonstrate to the Philippines and the whole world that the Cordillera is ready for tourism.”

“Minus the lockdown and restrictions” that shut down all tourism activities in 2020 and most of 2021, the Department of Tourism (DOT) brought together samples of the region’s popular gatherings “so the public can have a glimpse of what they’ve missed,” said Olowan.

Mayor Benjamin Magalong is currently on a business trip in the United States.

Baguio was the first city to reopen its borders toward the end of 2020. The city, by that time, lost P1.6 billion in forgone revenues when restaurants and hotels closed.

The number of current arrivals in Baguio was still lower than the 2 million visitors who traveled to the mountain city and the rest of the Cordillera before the pandemic.

At an Oct. 12 tourism briefing, DOT Cordillera Director Jovita Ganongan said Baguio and the region were visited by 134,000 guests in 2021. This year, the agency recorded over 260,000 tourists from January to June, she said, mostly in the summer capital where majority of residents have completed their vaccinations and booster shots.