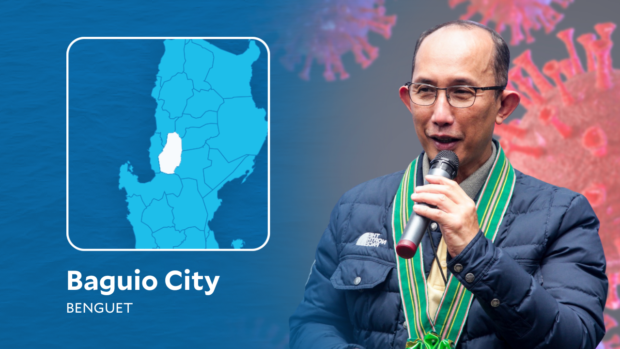 MANILA, Philippines — Baguio City has not seen any increase in COVID-19 cases despite high tourist arrivals in the area and the national government allowing the optional wearing of face masks in ventilated setups outdoors, Mayor Benjamin Magalong said on Tuesday.

Magalong admitted in an interview at the Laging Handa briefing that the local government already wanted to do away with the strict masking policy even when outdoors as early as September 5, but the Department of the Interior and Local Government (DILG) cautioned him against it.

But then Press Secretary Trixie Cruz-Angeles eventually revealed that the Department of Tourism (DOT) is mulling the tweaking of mask use policy, which delighted Magalong, as the relaxation of the order appeared to have prompted people to take extra care in avoiding COVID-19 transmissions.

(We saw no significant rise or difference even if we relaxed the rule in using the face mask. In fact, as early as September 5, I wanted to declare the optional face mask policy over open environment setups but unfortunately, I was cautioned by the Department of the Interior and Local Government.)

(And then the following day the IATF announced this policy, then on September 8, the President followed suit. So in fact the policy makes us happy because, unlike before, when people used to be so gung-ho about no longer wearing masks in open areas, now that we declared masking optional outdoors, they are taking extra care.)

Magalong, meanwhile, said that it is not hard to advertise Baguio from a tourism perspective, noting that they are already hitting 85 percent of their pre-pandemic tourism levels — even if rains pour down often on the country’s Summer Capital, which usually means lower tourist arrivals.

“Hindi mahirap ibenta ang Baguio eh kaya as of today ang estimate, we’re hitting about 85 percent of our pre pandemic level at ang nakakatuwa, the past na August, September mababa yan because these are lean months because of the wet season,” the local chief executive said.

(It’s not hard to promote Baguio to tourists because as of today, we estimate that we’re hitting about 85 percent of our pre-pandemic level, and what’s more encouraging is that this past months of August and September, tourism turnout is usually low because these are lean months because of the wet season.)

(Surprisingly, we registered high tourist arrivals in August and September.)

During President Ferdinand Marcos Jr.’s state visit to Singapore — a country that has already allowed the non-wearing of face masks except in high-risk settings like hospitals and public transportation — Angeles said that the DOT initially mulled the relaxation of mask use protocols to attract more tourists.

The Department of Health (DOH) initially contested the suggestion, but eventually sought a compromise.  Then, Marcos signed Executive Order No. 3, making the wearing of masks outdoors non-compulsory.

Health experts, however, warned about a possible higher COVID-19 count with the policy, advising the public to continue wearing face masks while prodding the DOH to administer more booster shots to immunize people.

For Baguio, Magalong said that Baguio enjoys a high vaccination rate, but he admitted that they are coordinating with the Department of Education (DepEd) and private schools to focus on students in the primary and secondary levels to get their booster shots — especially with face-to-face classes resuming.

Magalong also reminded us that people who might want to visit Baguio would need to register on their Baguio Visita website. With reports from Catherine Dabu, INQUIRER.net trainee