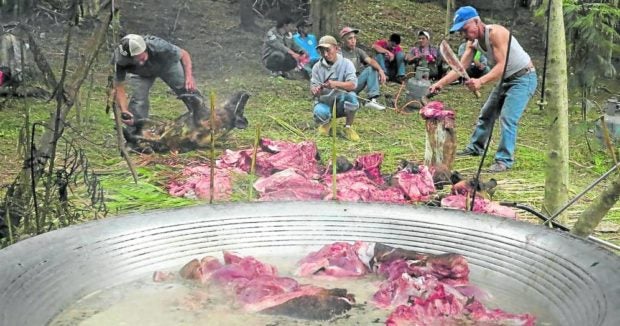 OUTDOOR COOKING | Tourists have been introduced to community shared meals, usually in cañao (ritual feasts), in this photo taken in 2016 when “Mangan Taku,” Baguio City’s food festival, was first introduced by the Department of Tourism. (Photo by EV ESPIRITU / Inquirer Northern Luzon)

BAGUIO CITY, Benguet, Philippines — As the volume of tourists motoring up to the summer capital is expected to breach the prepandemic level, officials here have decided to restage a well-loved summer event, the “Mangan Taku” food crawl and exhibition, which will put the spotlight on restaurants and other food establishments that have started recovering after two years of COVID-19 quarantines.

According to City Tourism Officer Aloysius Mapalo, it was possible that the City of Pines has already surpassed the number of leisure travelers who have entered the city before the pandemic broke out in March 2020, judging from the influx of tourists who came to Baguio since December last year.

The number peaked during the Holy Week, with over 50,000 guests booked in various accommodation establishments in the city from Palm Sunday to Easter Sunday, he said.

Baguio’s cooler weather draws tourists from March to May and has lined up multiple summer vacation activities from this Holy Week’s free bus tours, a Session Road Heritage Festival on May 1 to a floral sculpture exhibition during the May 12 to 22 “Sabsabong ti Mayo” (a variation of the traditional Flores de Mayo).

But being anticipated is the Mangan Taku, which will be held from April 27 to 30, mainly by restaurant operators, many of whom were forced to close during the first two years of the pandemic.

Gladys Vergara, chair of the Baguio Tourism Council, said restaurants that leased their spaces were among the first to fold or shift businesses. leaving only 334 of 1,045 tourism-oriented businesses registered in 2019 to remain open by the end of 2021.

With the easing of restrictions as COVID-19 cases declined, downtown food establishments, including hotel-based restaurants, have reported an increase in diners, due to the surge of tourists, Vergara said.

She said some of the food businesses that closed had taken out zero-interest government loans on the road to reviving their operations.

Romawac and fellow chef Laarni Lourdes Andam, who heads Cordillera Chefs Organization, are leading participants in this year’s Mangan Taku (Ilocano for “let’s share a meal”), which is organized annually by the Department of Tourism (DOT).

Romawac added he would want people to embrace “gastronomy as a form of art.”

The 2022 culinary event, which would be held along the reflective pool of Baguio’s Wright Park, will promote authentic “community cuisine,” much like ritual cañao (ritual feasts), to showcase meals shared “the Igorot way,” said Jovita Ganongan, DOT director for the Cordillera.

“Outdoor cooking” is one of the unique features of Cordillera cuisine, and guests would take home “a piece of the feast called ‘watwat’ (portions of communal meat),” she said.

Since 2016, the DOT has been preparing the highland region for food circuits to be packaged by private tour services.

No surge amid tourist influx in Baguio