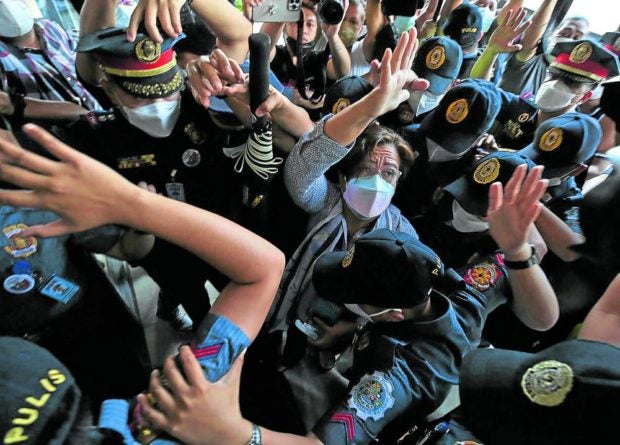 UNDER HEAVY GUARD | Swarmed by police escorts, former Sen. Leila de Lima appears at a Muntinlupa City court on Monday, a day after she survived a hostage-taking incident at the PNP Custodial Center where she is detained. The hearing on De Lima’s drug case, however, has been reset to Oct. 24, 2022, upon the prosecution’s motion. (Photo by RICHARD A. REYES / Philippine Daily Inquirer)

MANILA, Philippines — Allies of detained former Sen. Leila de Lima are questioning the circumstances of her being held hostage on Sunday, as the government continues to take steps in response to that incident—including the relief of the commander of the Philippine National Police Custodial Center where the former lawmaker has been detained.

Former Sen. Franklin Drilon on Monday questioned the PNP’s policy of having her detained near terror suspects who were also held at the custodial center.

Three of those suspects allegedly tried to escape on Sunday morning, with one of them, Feliciano Sulayao Jr., holding De Lima hostage until he and his accomplices, Arnel Cabintoy and Idang Susukan, were taken out by a police sniper.

“Why did they mix these three terrorists? Why did they allow them to be detained in a facility where De Lima is detained?” asked Drilon.

He noted that even in the state penitentiary in Muntinlupa, the prisoners were segregated according to the gravity of their offense.

“This is a penal rule followed all over the world,” said Drilon, a former justice secretary.

“They (the PNP) used to be strict on that aspect, as I was even refused entry once when I tried to visit her,” he said.

‘Difficult to visit her’

In August, the PNP was criticized for its refusal to accommodate De Lima’s visitors, after five American lawmakers were barred from seeing her.

That delegation was led by Sen. Edward J. Markey, chair of the US Senate foreign relations subcommittee on East Asia and the Pacific, who has been critical of the drug charges filed against De Lima by the administration of then-President Rodrigo Duterte.

Friends and allies of De Lima, including Drilon and Sen. Risa Hontiveros, were also prohibited from seeing her on her birthday on Aug. 27.

Hontiveros, who went to see De Lima at the PNP General Hospital soon after her ordeal on Sunday, also recalled the time when she and other visitors “found it very difficult to visit her… during her last birthday.”

“So how [was] a person who supposedly bolted prison able to take her hostage?” said the senator, who also pointed out that the PNP Custodial Center “is like a maze. It’s deep within Camp Crame.”

And yet, “[i]n the … headquarters of our national police, supposedly the most secure of any camp or any custodial center, she was held hostage,” she emphasized in a radio interview on Monday.

“Whatever will be the results of the PNP investigation should be acceptable and believable to [De Lima],” Hontiveros said, adding that she should not have been detained to begin with.

Drilon urged the courts to grant De Lima’s pending petition to be allowed to post bail.

“Bail is denied only where evidence of guilt is strong. But here, the principal witnesses have retracted [their] statements,” he said.

“In this case, you have recantations by two witnesses and therefore evidence of guilt being strong is no longer met, and therefore bail can be granted,” Drilon added.

But last month, one of those witnesses, former Bureau of Corrections (BuCor) officer in charge Rafael Ragos, was prevented by state prosecutors from affirming in court the retraction of his earlier testimony that De Lima received payoffs from convicted drug lords.

His lawyer said on Sept. 30 that the Department of Justice (DOJ) sought reconsideration on an earlier court order that would have allowed Ragos to take the witness stand.

In the wake of Sunday’s hostage incident, the DOJ said it was ready to discuss a possible home furlough for De Lima proposed by the PNP.

“[But] that should be discussed in open court,” Justice Secretary Jesus Crispin Remulla said in a text message to reporters.

A hearing on the drug charges against De Lima was supposed to resume on Monday. But the Muntinlupa City Regional Trial Court reset the hearing to Oct. 24 upon the prosecution’s motion. 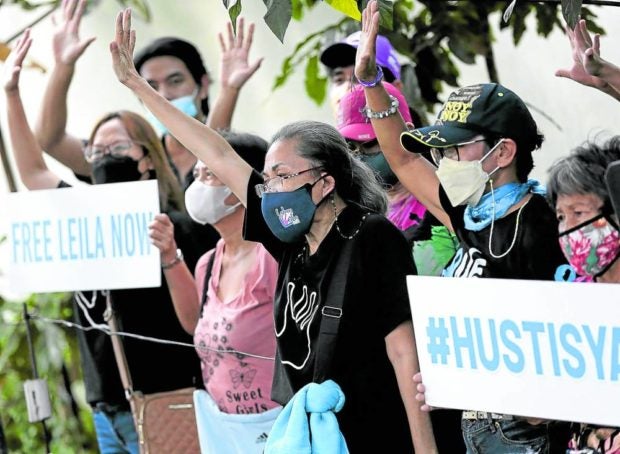 APPEAL | Supporters of detained former Sen. Leila de Lima gather outside the Hall of Justice in Muntinlupa City on Monday, Oct. 10, 2022, to reiterate their call to the government to release her. (Photo by RICHARD A. REYES / Philippine Daily Inquirer)

Deputy City Prosecutor Darwin Cañete argued that De Lima had been exposed to Interior Secretary Benhur Abalos when the latter, who has tested positive for COVID-19 (see related story on Page A5), visited her soon after the hostage incident.

But De Lima’s lawyer, Filibon Tacardon, described that motion as a dilatory tactic.

Tacardon also said his client had yet to decide on the offer of home furlough.

According to PNP chief Gen. Rodolfo Azurin Jr., an “administrative investigation [has begun] to determine the culpability of the [PNP Custodial Center] commander,” Lt. Col. Patrick Ramillano, who was relieved from his post.

Azurin said earlier that De Lima was not the intended target in that incident, since escape was the actual plan of the three slain prisoners.

But close friends and supporters of De Lima believe otherwise.

“It’s really possible that the incident was part of a plan to hurt or, worse, assassinate [De Lima],” said one of them, who declined to be named.

The source pointed out that De Lima had been held alone in a detention cell at the northern portion of the custodial center, separate from the area where Sulayao was detained.

De Lima’s detention cell, the source added, was separated by walls and a metal gate from the prison quarters of other high-profile detainees, among them Abu Sayyaf bandits and police officers standing trial.

“It’s really puzzling how the hostage-taker was able to enter the detention quarter where [De Lima] is detained. Was the gate open at the time? If it was, then who unlocked the gate?” the source continued.

“I have lost count of how many times I have been in and out of the PNP Custodial Center. And each time, it’s really more difficult than going through the eye of a needle,” the source said.