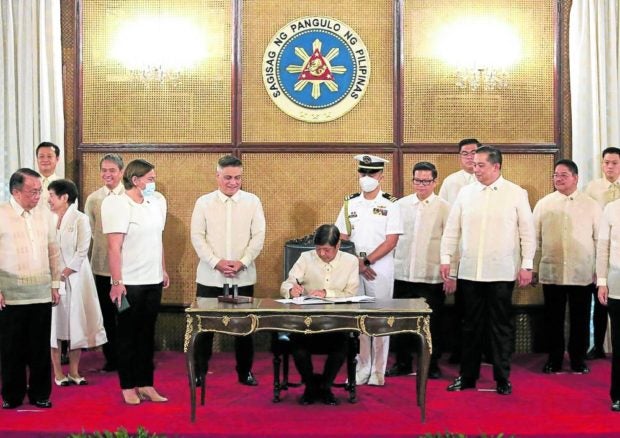 CRIME DETERRENT | President Ferdinand Marcos Jr. signs the SIM Card Registration Act in a ceremony witnessed by Vice President Sara Duterte and leaders of the Senate and the House of Representatives at Malacañang on Monday, Oct. 10, 2022. The president says the new law will provide “a strong deterrence against the commission of wrongdoing.” (Photo by MARIANNE BERMUDEZ / Philippine Daily Inquirer)

MANILA, Philippines — Text spam and scam messages may soon be a thing of the past once the law mandating the registration of subscriber identity module (SIM) cards takes effect.

On Monday, Republic Act No. 11934, or the SIM Card Registration Act, became the first law to be signed by President Ferdinand Marcos Jr., who called it a “long overdue” measure.

“We will soon be able to provide law enforcement agencies the tools needed to resolve crimes perpetrated with the use of these SIM cards as well as providing a strong deterrence against the commission of wrongdoing,” Mr. Marcos said in a speech in Malacañang.

Local telecommunications companies (telcos), however, have called for the ramping up of the national ID system’s rollout and more time to prepare for the law’s implementation.

“Our position has been clear from the beginning, a national ID system must be in place to ensure the safe and successful implementation of this new law,” Globe Telecom Inc. general counsel Froilan Castelo said in a statement on Monday.

As of May, the Philippine Statistics Authority said it delivered about 10.5 million national IDs, representing 33.7 percent of its target this year.

“[It] will greatly help if both the national ID system and the passport system will be used as the validation of the identity of the subscriber. Doing so will unburden the telcos of the need to establish another database to store biometrics data, which would be time-consuming and resource-heavy,” DITO Telecommunity chief technology officer Rodolfo Santiago said.

PLDT Inc.’s wireless unit Smart Communications Inc. also raised the need for telco players to be given more time to prepare for the measure’s implementation to “ensure the safety of the information that will be collected from prepaid subscribers.”

Civil society groups on Monday also sounded the alarm on several provisions of the law that could violate freedom of speech and the right to privacy.

Under RA 11934, all new SIM cards sold after the law takes effect should be deactivated, with new users required to register their SIM cards with their telco.

The registration will be at the point of sale, which means that a SIM card will not be sold to a person who refuses to provide the required personal information.

Existing postpaid and prepaid mobile phone subscribers will have to register their SIM cards within 180 days or six months from the effectivity of the law to avoid deactivation.

SIM cards not registered within this period will be automatically deactivated, and will only be reactivated after complying with the law.

In the case of foreigners and tourists, they should present a passport and provide a Philippine address.

A SIM card may be registered for use by a minor but should be under the name of a parent or a guardian.

A provision in the law also requires a person to use his or her real name and phone number in making social media accounts.

“The mandatory SIM registration law puts at risk our right to privacy and data protection. It is ineffective and has ill effects as seen in other countries,” said the Computer Professionals Union, a mass organization of information and communications technology practitioners.

Many are concerned that the law could be weaponized to surveil and target perceived state enemies, including journalists, activists, and human rights defenders.

In other countries where the same law is in effect, state surveillance has been a real concern. For example, Peru, Brazil, and Mexico have adopted regulations that compel telcos to collect and identify mobile users’ information for potential use by law enforcement.

In Indonesia, where the same law is in effect, data breaches are so common that just last August, a hacker posted the national identity numbers, phone numbers, and telco providers of at least 1.3 billion SIM registrations.

“We understand the recent concerns over online scams, but sacrificing privacy is a more problematic response,” he said.

Frederike Kaltheuner, Human Rights Watch director for Technology and Human Rights, noted that SIM card registration would allow the state to know the identity of the owner of a SIM card, and thus who is most likely making a call or sending a message at any given time.

“It eradicates the potential for anonymity of communications, enables location-tracking, and simplifies communications surveillance and interception,” she said.

The law prohibits the disclosure of the personal information of a subscriber unless upon subpoena or lawful order from a competent court or written request from a law enforcement agency in relation to an ongoing investigation.

The law prescribes hefty penalties of up to P4 million for violators.

Offenses punishable under RA 11934 include the failure or refusal to register a SIM card; breach of confidentiality, may it be intentional or due to negligence; use of false or fictitious information or identity or fraudulent IDs in SIM card registration; spoofing a registered SIM card; sale of a stolen SIM card, and sale or transfer of a registered SIM card without complying with the required registration.

Information and Communications Technology Secretary Ivan John Uy said the National Telecommunications Commission was set to consult with telcos on the guidelines for SIM card registration.