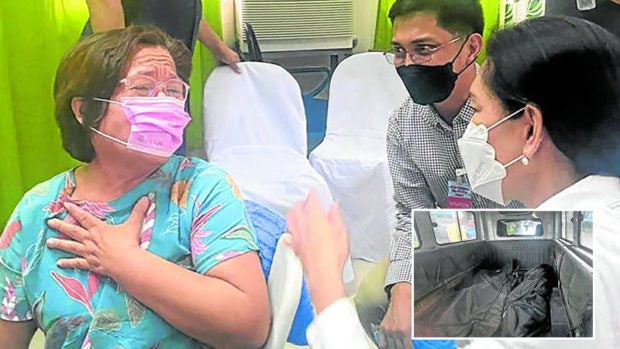 SHAKEN SURVIVOR | Sen. Risa Hontiveros visits her former Senate colleague Leila de Lima in Camp Crame on Sunday, Oct. 9, 2022, after the former senator was held hostage that morning by one of three prisoners who allegedly tried to escape. The inset shows the body bags of the prisoners, who were all shot dead by a police sniper. (Photos from Agence France-Presse / Office of Sen. Risa Hontiveros)

MANILA, Philippines — President Ferdinand Marcos Jr. on Sunday said he would inquire into the condition of detained former Sen. Leila de Lima after she was taken hostage that morning by one of three prisoners allegedly trying to escape.

De Lima emerged unhurt from that ordeal after the three prisoners, suspected members of the terror group Abu Sayyaf, were neutralized by the police.

“Following this morning’s incident at Camp Crame, I will be speaking to Sen. De Lima to check on her condition and to ask if she wishes to be transferred to another detention center,” the president said on Twitter.

The former senator, a leading critic of the drug war of Marcos’ predecessor Rodrigo Duterte, has been detained at the Philippine National Police Custodial Center in Camp Crame since 2017, on drug charges that other critics of Duterte say were fabricated.

That morning, as Interior Secretary Benhur Abalos recounted the incident to reporters, Police Cpl. Roger Agustin was bringing breakfast at past 6 a.m to the detainees when one of them stabbed him repeatedly with a fork.

That inmate then opened the cell of two others as they tried to escape, not knowing there was a sniper above.

Two of those inmates, Arnel Cabintoy and Idang Susukan, were shot when they refused to yield, while the third prisoner, Feliciano Sulayao Jr., ran to De Lima’s cell and held her hostage.

“He tied and blindfolded the senator. He asked for a Hummer [vehicle] and a helicopter during the negotiations. When he asked for water, Col. Mark Pespes found a chance to neutralize him,” Abalos said.

Pespes, the director of the PNP Headquarters Support Service, later told the Inquirer that De Lima was not Sulayao’s intended target and that he headed to the former senator’s cell thinking “it would lead him to the exit.”

Police chief Gen. Rodolfo Azurin Jr. also told local radio station dzBB that De Lima did not appear to have been the target.

“They saw her as an ideal cover. Their intention really was to escape,” he said.

De Lima herself later issued a statement on that ordeal.  The 63-year-old former senator was subsequently given the standard medical checkup, according to her lawyer Boni Tacardon. 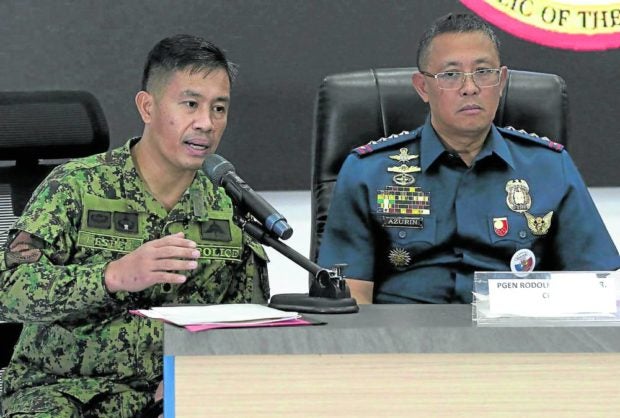 Agustin suffered multiple stab wounds and was brought to the V. Luna Medical Center in Quezon City in critical condition.

Abalos said he visited De Lima and relayed the president’s offer to transfer her to another detention facility if she wanted to.

“It’s her choice. It’s always for her safety and interest, but she told me that she does not need to be transferred and she feels safe there and nobody wanted what happened earlier,” he said.

Undersecretary Cheloy Garafil, the officer in charge of the Office of the Press Secretary, said in a statement that Marcos had also directed Camp Crame “to enforce all measures necessary to ensure that no act of violence in said facility and all other PNP detention centers shall happen again.”

The PNP Custodial Center is administered by the PNP Police Headquarters Support Service, which also provides security escorts to inmates who are undergoing trial.

The Commission on Human Rights, meanwhile, said it was already conducting its own investigation into the incident involving its former chair.

“While De Lima is now safe, it puts into serious question [her] safety… as well as [those of] other detainees in the detention facility,” the commission said.

International rights watchdog Human Rights Watch (HRW), meanwhile, said it was “horrified” by the incident and said it only “underscored the compelling need to release her from police detention.”

“She should never have been there to begin with. The Philippine government has held her hostage the past five years for her human rights advocacy,” said HRW senior researcher Carlos Conde.

The latest incident underscored the need for her to be “freed immediately,” Conde said.

“Now more than ever, we call for the immediate release of [De Lima] from her unjust detention and the dropping of the trumped-up charges against her,” said her close friend and political ally Sen. Risa Hontiveros, who rushed to visit De Lima after the incident.

Sen. Juan Edgardo Angara said the PNP should ensure his former colleague’s safety by improving the security arrangements at the PNP Custodial Center.

“[The courts] should consider her application for bail, possibly even on recognizance after a proper assessment of the risk of her taking flight,” Angara told the INQUIRER.

According to Senate Minority Leader Aquilino Pimentel III, the incident only proved the need for the “wheels of justice in this country [to] move quicker.”

Former Sen. Francis Pangilinan said the PNP should hold its personnel accountable for what had happened to his political ally and friend.

“We also reiterate our call [for the] government [to] take swift measures to fast-track the resolution of her cases,” Pangilinan said.

For former Senate President Franklin Drilon, the PNP should determine if the hostage-taking incident was “planned.”

—WITH REPORTS FROM ABBY BOISER AND AGENCE FRANCE-PRESSE