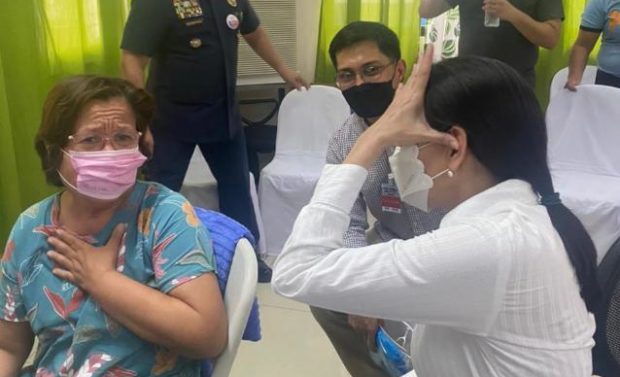 MANILA, Philippines — Detained former Sen. Leila de Lima thought she would breathe her last when she was held hostage on Sunday.

De Lima thanked the police officers who responded to that incident.

“If not for the timely intervention of the PNP security forces, I don’t think I would have come out alive since the hostage-taker, [Feliciano Sulayao Jr.], was already determined to die and take me with him,” De Lima said in a statement.

“While I am still trying to recover psychologically and emotionally from this harrowing experience, I am sure of one thing I learned from it. Being so near to death has only made me value life even more,” she said.

Sulayao, she said, told her that since his two companions “were already dead, he’s certain he would also be killed and he might just as well also kill me.”

“I consider what happened to me as a near-death experience,” the former lawmaker said.

“I have already endured five years of unjust detention… It was therefore farthest from my mind that on top of this ordeal, I also had to survive the knife of a fellow detainee,” said De Lima.

She added: “I am now safe and sound except for the lingering pain on my chest where the hostage-taker constantly pressed the point of his knife while holding me hostage.”

“Please also pray for the injured police officer who, like me, was the other but more unfortunate victim of this incident,” De Lima said further.

“While I have survived with only a knife mark and some considerable distress, he is still fighting for his life,” she also said.