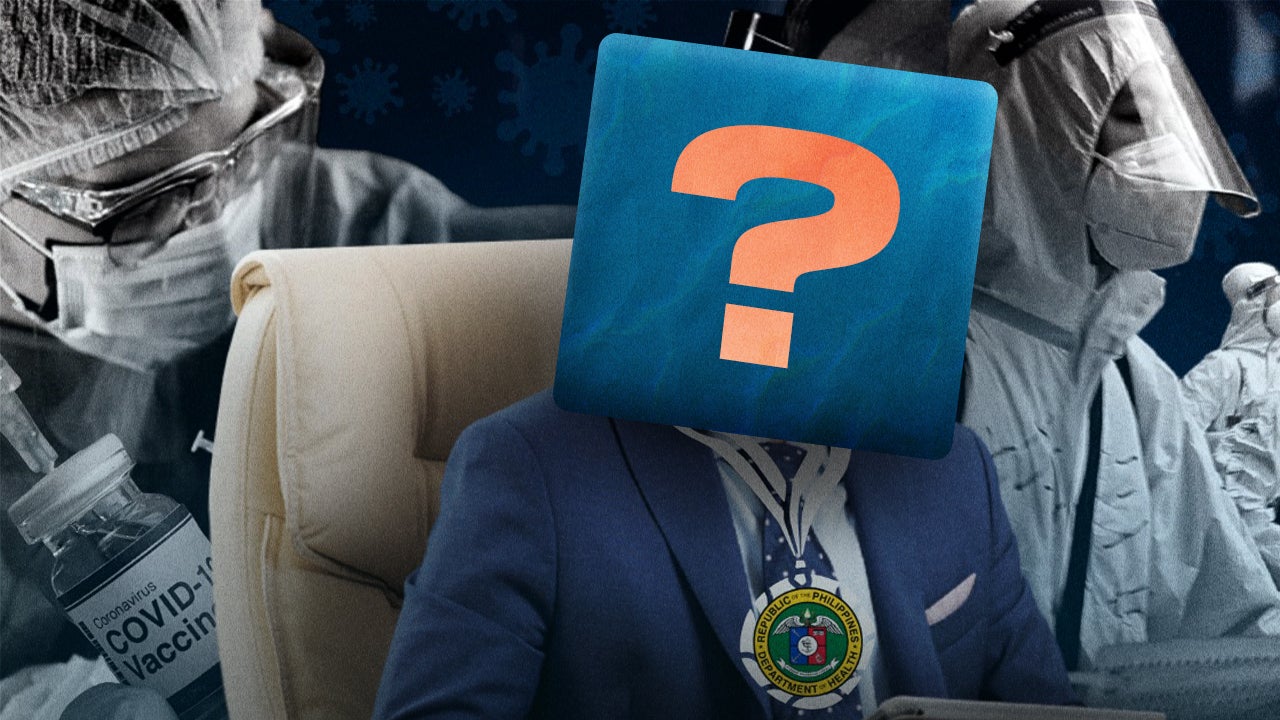 MANILA, Philippines—President Ferdinand Marcos Jr. and his administration inherited a slew of health-related problems from the Duterte administration, including those beyond the Marcos administration’s control, like the COVID-19 pandemic.

Before Marcos took over, then-President Rodrigo Duterte was criticized for his pronouncements on managing the COVID-19 situation in the country. Among these was his “shoot them dead” warning for violators of lockdown measures.

Some of Duterte’s statements—despite his Cabinet’s effort to explain the intention behind those—have been connected to the vaccine panic among the public last year.

The Department of Health (DOH) and its officials, especially former Health Secretary Francisco Duque III, also had their share of controversies during the pandemic.

From “dropping the ball” on vaccine acquisition and “flip-flopping” COVID-19 policies to the controversial overpriced pandemic deals, the DOH during Duterte was able to dodge a string of issues.

When Marcos was elected to office in elections last May, he vowed to fix the previous administration’s flaws and shortcomings in the government’s response to COVID-19.

“There were shortcomings in the COVID-19 response. We will fix them, out in the open, no more secrets in public health,” Marcos said at his inaugural speech last June 30.

As the new administration reaches its first 100 days, INQUIRER.net looked back at the progress and status of health-related policies in managing the country’s COVID cases amid the ongoing pandemic.

A few months ago, the newly sworn-in Marcos also promised that the country would not be “caught unprepared, underequipped, and understaffed to fight the next pandemic.”

“To start with, we never got over the pandemic of poor, if any, free public health. The last major upgrade of our public health system exemplified by the resources poured into PGH predates the current shambles by three generations,” he said.

In July, during his first State of the Nation Address (Sona), Marcos again left the public with another promise, saying that there would be no more lockdowns as a means to fight COVID.

“For our health situation, the threat of COVID-19 is still there, especially now that variants are being discovered. But we cannot afford another lockdown,” Marcos said, speaking in Filipino.

“We will not implement another lockdown. We have to balance our health and the welfare of our citizens at one end and the economy on the other.”

The President likewise promised to establish the country’s own Center for Disease Control and Prevention and a vaccine institute.

“Together with Congress, we will create a Center for Disease Control and Prevention and a Vaccine Institute,” he said.

The establishment of the Philippines’ vaccine institute has been previously mentioned and tackled during the previous administration, with the vision of it being “Duterte’s legacy.”

However, the Duterte administration failed to do it, even after the Department of Budget and Management (DBM) was instructed to set aside funds for the proposed vaccine institute.

READ: As his ‘legacy,’ Duterte wants to establish PH’s own vaccine institute — Palace

In his first 100 days, however, Marcos has yet to name a health secretary that would lead the DOH amid the continuing fight against COVID-19.

At the end of Duterte’s term, Duque—who was placed in the hot seat in 2021 over what some lawmakers said was his failure of leadership, negligence, lack of foresight, and inefficiency in handling the COVID-19 pandemic—stepped down from his position as health secretary without a successor to take over the agency.

READ: When ‘crocodile tears’ are shed: Duque and his shrinking space

Before he left his post, Duque said that the next head of DOH must be experienced in dealing with the COVID-19 pandemic. 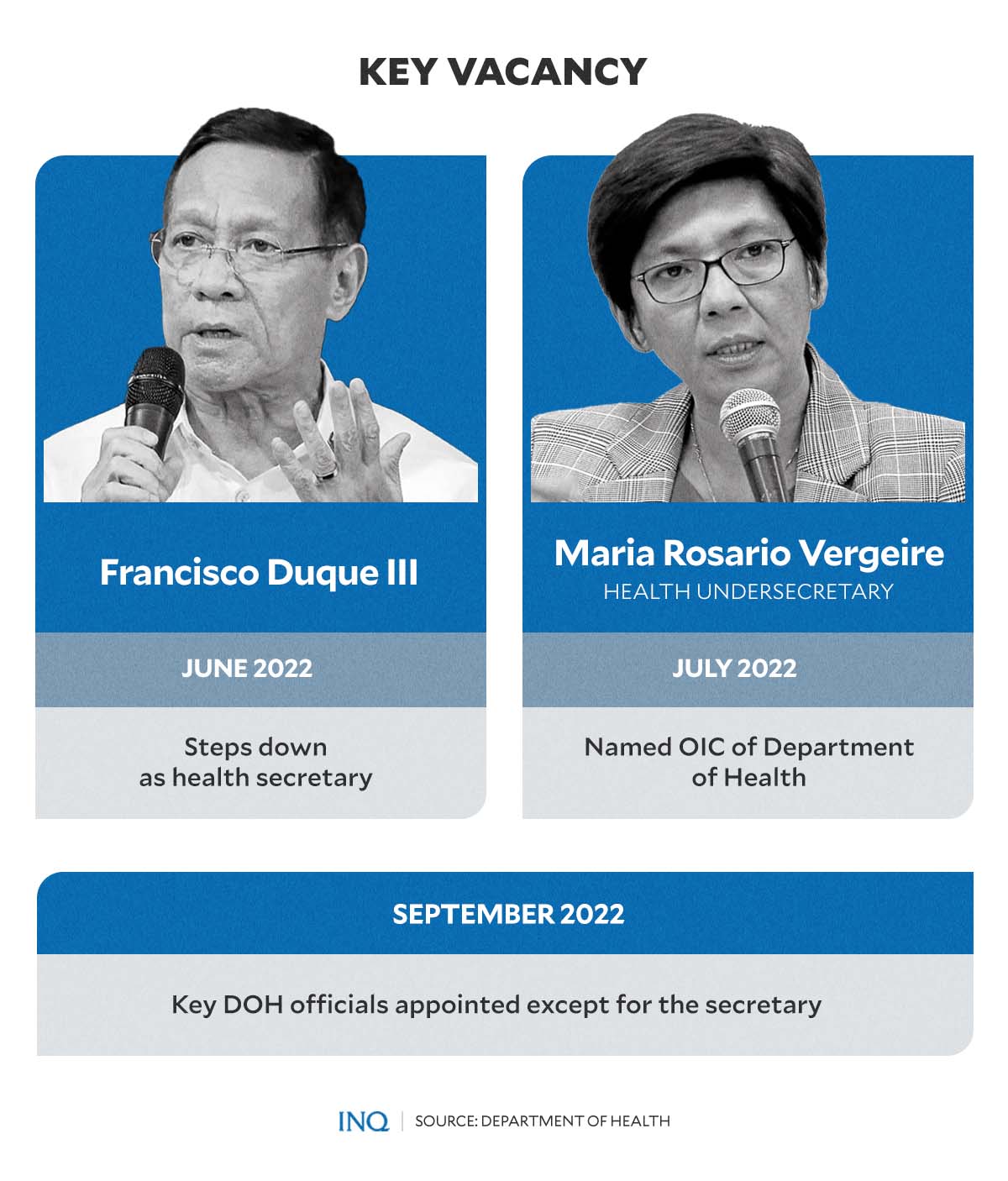 “It would be good that whoever they place in that position has experience involving and working with us in addressing this pandemic,” he said.

When asked why there is no health secretary yet amid the continuing fight against the pandemic, Marcos explained that the DOH’s job was not limited to dealing with COVID-19.

“We have to remember that the DOH is not about COVID alone. It’s about public health in general. That’s another side of it, and it’s as important as COVID is,” the President said in a television interview.

He also noted that until the DOH’s structure is finalized, the government must keep it functioning.

“There are many other elements to the DOH […] Actually, I’m hoping, and I’m thinking that […] the consultants that are helping us, putting the new structure of the DOH together, that’s where our new secretary will come from.”

In a column published on September 26, Australian-Filipino businessman Peter Wallace urged the President to appoint a health secretary immediately.

“It’s no exaggeration to say people are dying, but they wouldn’t if there were a health secretary. This decision can no longer be delayed,” Wallace said, adding that Vergeire—without “the power to introduce the major reforms the health service demands”—could only hold the fort in transition.

Last September 12, then Press Secretary Trixie Cruz-Angeles announced that the state of calamity in place nationwide because of COVID was likely to last for three more months.

According to Angeles, this was to allow more time for indemnification, emergency procurement, and release of special risk allowances for healthcare workers.

“The state of calamity is extended for possibly three months but only for the purpose of preserving the benefits under it such as but not limited to the indemnification, emergency procurement, special risk allowance for healthcare workers,” she said

“We will transition out of the state of calamity after further review,” she added.

READ: Palace: State of calamity due to COVID continued for ‘possibly 3 months’

Earlier that month, the DOH said it recommended extending the state of calamity to the National Disaster Risk Reduction and Management Council (NDRRMC).

In March 2020, then-President Duterte signed Proclamation No. 922, which declared a state of public health emergency in the country due to the coronavirus outbreak.

According to the proclamation, the state of public health emergency could “remain in force and effect until lifted or withdrawn by the President.” 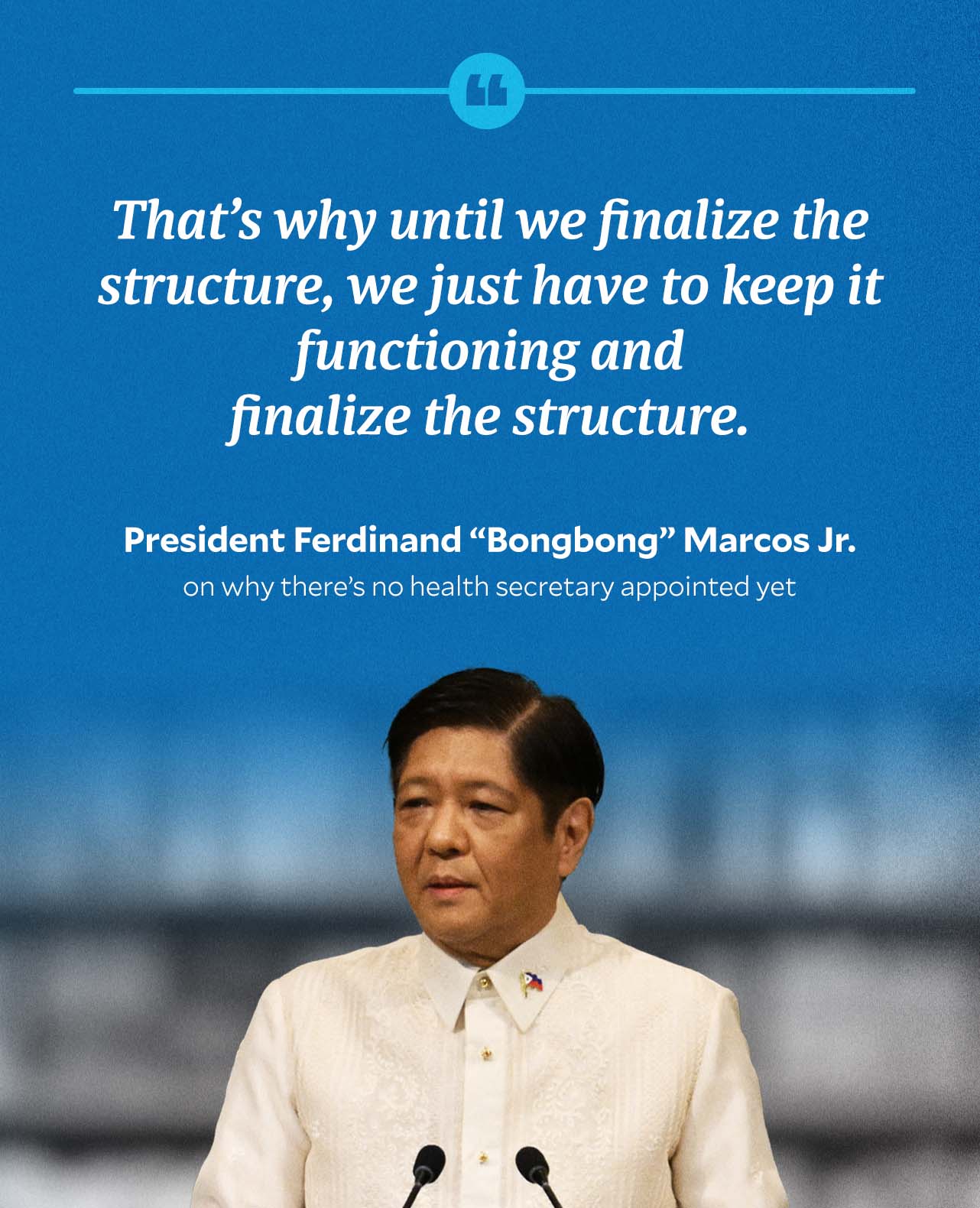 A separate proclamation declaring a state of calamity in the Philippines due to COVID-19 was also signed by Duterte.

Last month, when the Palace announced the extension of the country’s state of calamity due to COVID-19, Malacañang also announced that Marcos had signed Executive Order No.3.

The EO removes the requirement to wear masks outdoors as part of COVID protocol but reiterated the need to continue complying with minimum health standards.

“We issued today EO No. 3 allowing the voluntary wearing of face masks in outdoor settings and maintaining the enforcement of minimum public health standards during the state of a public health emergency for the COVID-19 pandemic,” said Perez. 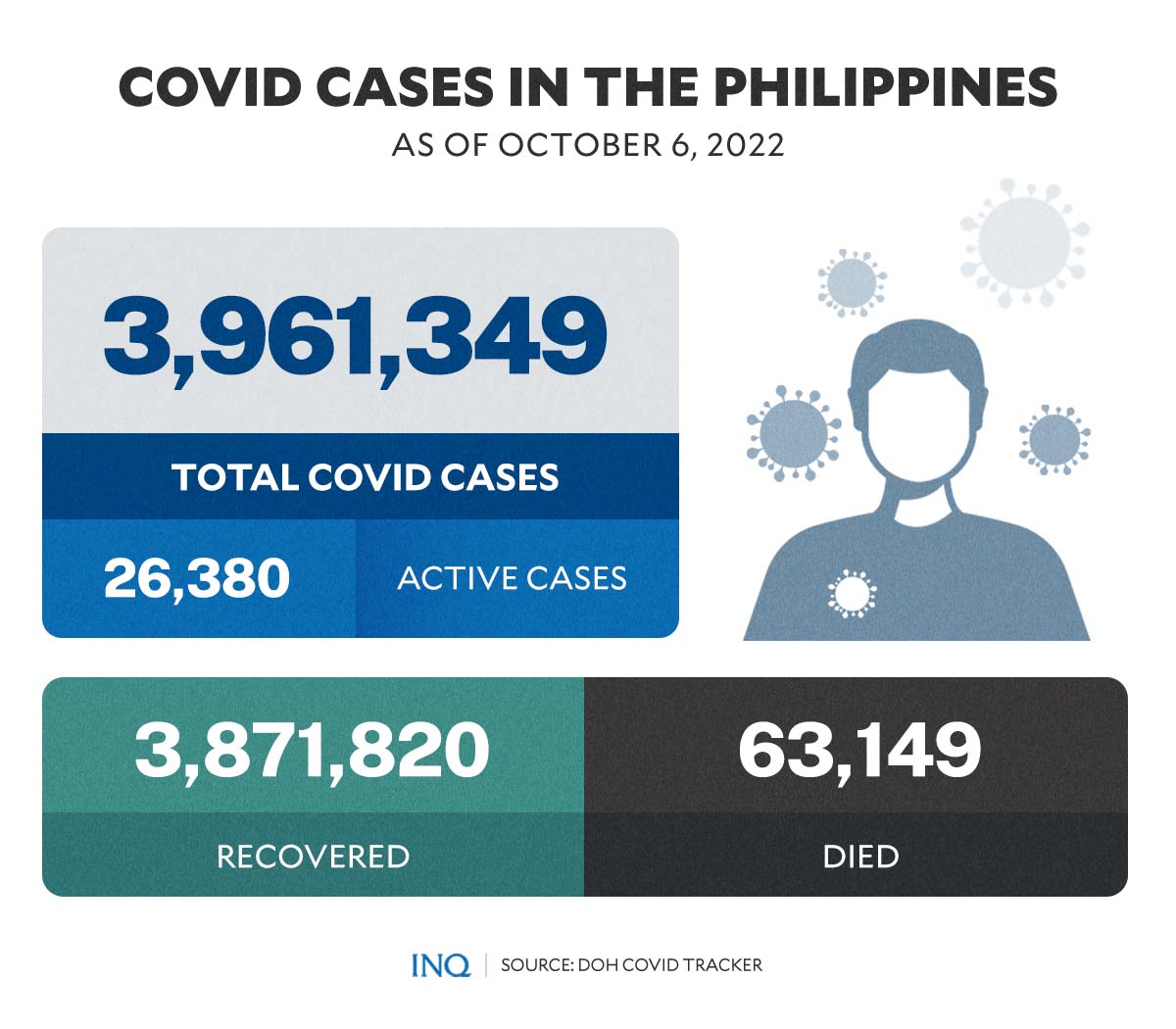 The EO, however, emphasized that immunocompromised individuals, senior citizens, and those who are not fully vaccinated against COVID are “strongly encouraged” to continue wearing face masks even outdoors.

This came a few days after the DOH expressed concern and hostility toward a local government’s move to make wearing face masks against COVID-19 optional.

The DOH’s confusing stance on COVID safety policy was pointed out by health reform advocate and former special adviser to the National Task Force on COVID-19 Dr. Tony Leachon.

Adding to the confusion was the DOH’s graphics, or visual aids, released days before EO No. 3 was signed by Marcos, which reminded the public of the need for protection against COVID by wearing masks outdoors.

Posted by Department of Health (Philippines) on Wednesday, September 7, 2022

“Surprisingly, the DOH, based on their website, has released infographics supporting the use of face masks. It’s quite counterintuitive,” Leachon told INQUIRER.net.

“IATF’s recommendation is to liberalize our mask-wearing mandate and make mask-wearing outdoors voluntary across the country—and yet DOH released posters/reminders on the importance of masking,” he added.

“I think DOH doesn’t want blood in their hands.”

READ: To wear, or not wear, face masks vs COVID: The zigzag road PH is taking

Although the order detailed where people can remove their masks (open spaces, non-crowded outdoor areas with good ventilation) and who are still required to keep their masks on at all times, some worry that the new mandate might be open to self-interpretation.

“EO No. 3 makes mask wearing voluntary in ‘open spaces and non-crowded areas with good ventilation.’ Unfortunately, ‘open,’ ‘non-crowded,’ and ‘good ventilation’ are all open to personal interpretation and opinion, which doesn’t solve, but rather creates more, problems,” lawyer Theodore Te had said in a tweet.

Due to low booster rate coverage, Vergeire announced last September that the DOH would not reach its initial target of inoculating 50 percent of the country’s eligible population with the COVID booster shot in the first 100 days of the Marcos administration—or by October 8.

“Right now, our booster doses is really at 23 percent. It is at 18 million. The numbers are really anemic. When we look at this, we really cannot reach the 50 percent during the first 100 days,” she said. 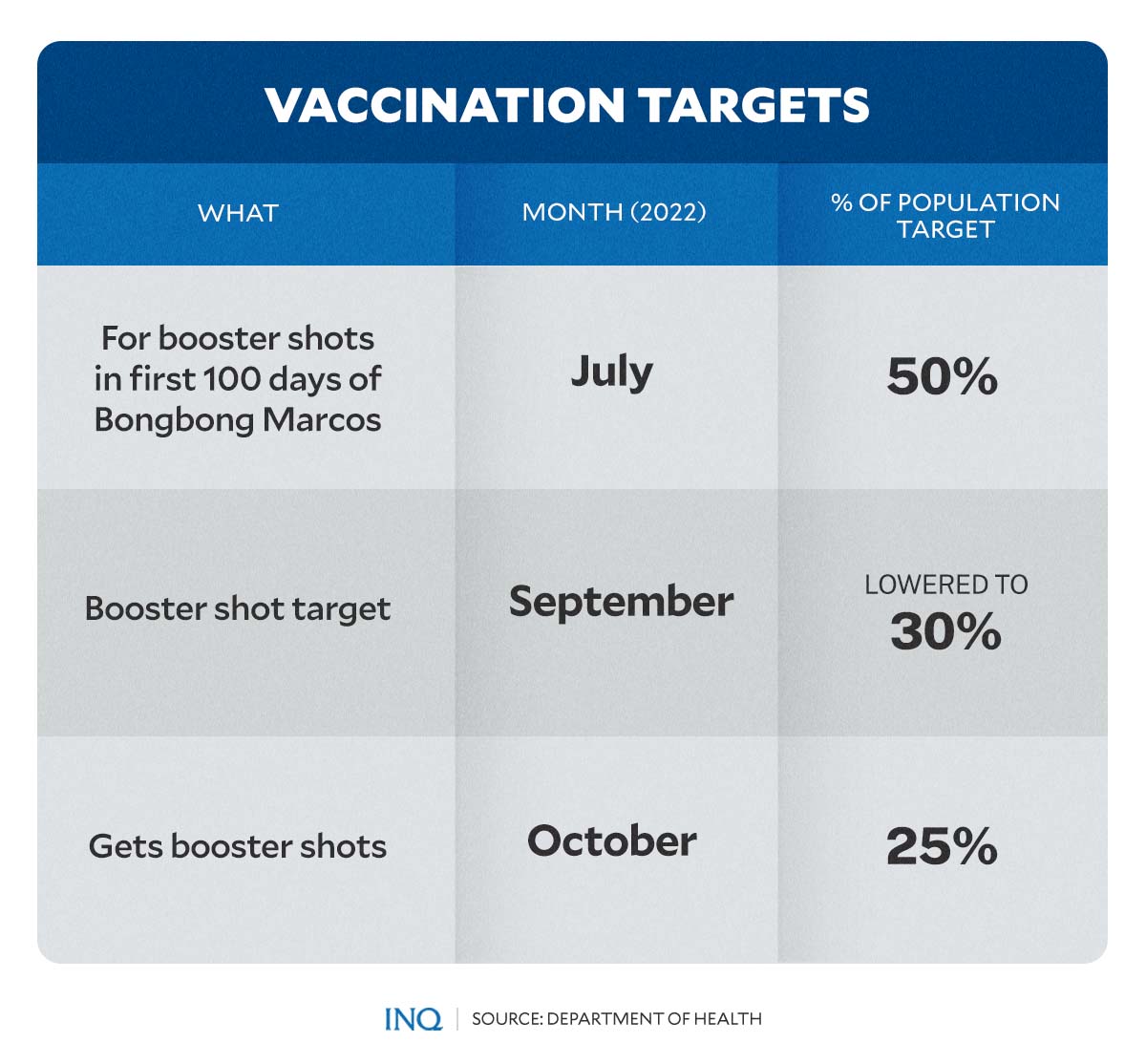 Last September 22, the DOH adjusted its target for the COVID booster campaign to 30 percent by October 8.

“Due to the pace at which our booster vaccination is going, we have adjusted our target only for the first 100 days to 30 percent,” said Vergeire in a statement.

“Even so, this does not mean we will be lax in our efforts and settle for just reaching 30 percent. On the contrary, we are doubling down on our campaign to reach and even surpass our target of 30 percent by October 8 and 50 percent by the end of the year,” she added.

Based on the latest vaccination numbers last October 4, around 19.7 million Filipinos have already received booster shots. This accounts for 25 percent of the current COVID-19 vaccine target.

Vergeire clarified that the initial 50 percent target for the government’s “PinasLakas” booster vaccine program would remain the same until the end of 2022.