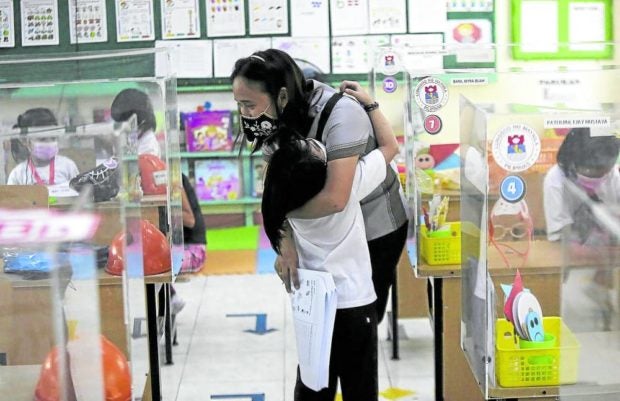 PSYCHIC REWARDS A kindergarten teacher gets a hug from one of her pupils as their reunion marks the resumption of in-person classes at Aurora Quezon Elementary School in San Andres, Manila, in this photo taken on Feb. 9. The school was one of the campuses to lead the return to normalcy after the pandemic lockdowns. —RICHARD A. REYES

MANILA, Philippines — Public school teachers are “clinging on a knife’s edge” as they resort to different schemes just to avail themselves of loans from the Government Service Insurance System (GSIS) and other private lending institutions, with some even opting to pawn their ATM cards to nonaccredited entities.

Some teachers who earn as much as P50,000 monthly still need to take out loans to pay for their housing, education and health needs, said Benjo Basas, chair of the Teachers’ Dignity Coalition (TDC).“These loans are not for luxuries because some teachers use the money to buy laptops. We will not [borrow money] if our salaries are enough,” Basas said in a phone interview on Sunday.

On World Teachers’ Day, teachers renew their push for salary upgrades and better benefits, including the reform of “unfair” policies, such as compounded salary deductions for late remittances in the GSIS, where more than half of the membership consist of Department of Education (DepEd) employees.

Forced to be creative

Basas said there is a policy that requires a minimum of P6,000 net take-home pay before a loan is allowed from accredited loan agencies.

“If you have a monthly take-home pay of P6,000 and are planning to [take out a] loan with a monthly amortization of P2,000, you won’t be allowed to because it would go beyond the minimum limit,” he said. This forces some teachers to “be creative and cling on a knife’s edge,” resorting to nonaccredited loan facilities that would take their ATM cards so they could directly withdraw the monthly amortization.

Teachers who could not pay their debts would report to the bank that they lost their ATM card so it would be blocked and they would be issued a new one, where “they can withdraw their own money again. But the loan agency could not access their account anymore so this leads to the filing of cases,” Basas said.

There is also a policy that penalizes teachers for late remittances of their contribution when their payslips show the amount was being deducted from their salaries.

TDC said teachers prefer to have their own insurance system because of allegedly “unfair” and “problematic” policies of the GSIS, but Vice President and Education Secretary Sara Duterte does not seem keen on supporting the demand.

During their first “consultation meeting” with Duterte held on Aug. 2, Basas said the education chief was “not open to the idea” of having a separate insurance system because “the GSIS would resist.”

The meeting was attended by 36 TDC leaders representing chapters nationwide and was nevertheless described by the group as “productive.”

Under Republic Act No. 8291, membership in the GSIS is compulsory for all government employees.

DepEd spokersperson Michael Poa said the department had already held a preliminary meeting with the GSIS to address the problems raised concerning the teachers’ loans.

Basas said “this [system] cannot stay like this where GSIS would just impose policies that we think are unfair, unjust and unfavorable.” He added that teachers should be represented in the GSIS board, which makes the policies in insurance services. The law provides that teachers can be represented either by the president of the Public School Teachers Association, which, according to Basas, was a private organization composed mainly of retired regional directors or superintendents, or the Philippine Association of Schools Superintendents, which is also headed by DepEd officials. “We do not accept this kind of representation because more than half of GSIS membership comes from DepEd and the bulk of these employees are teachers,” Basas said.

Meanwhile, more than 57,000 teachers and nonteaching personnel, through the Alliance of Concerned Teachers (ACT), submitted a petition on Tuesday to the House committee on appropriations, calling for the salary upgrade of teachers and other education workers.“As our government pays tribute to our teachers this World Teachers’ Day, we hope that our lawmakers would do something as concrete and as substantive as enacting considerable raises for teachers and education support personnel,” ACT chair Vladimer Quetua said in the petition addressed to Rep. Elizaldy Co and signed by 57,209 teachers and education support personnel from public and private schools.

The group is appealing for laws raising the entry-level salary of public school teachers from Salary Grade 11, currently at P25,439, to Salary Grade 15, or about P35,000 a month.

They are also calling for a pay increase for instructors in local and state universities and colleges from Salary Grade 12 to Salary Grade 16; a minimum monthly salary of private school teachers at P30,000; and a national minimum living wage for Salary Grade 1 for education support staff in private and public schools.

The entry-level pay of teachers is set to increase to a minimum of P27,000 next year under the last tranche of the Salary Standardization Law V approved by former President Rodrigo Duterte.

Vice President Duterte said that raising the salary of public school teachers may force the private sector to shut down.

“If the government continues to increase the salaries of teachers in the government sector, this will put undue pressure on the private educational institution,” Duterte said.

Instead of salary upgrades, DepEd spokesperson Poa earlier said the agency would focus on possible “nonwage benefits” or allowances and on hiring more nonteaching staff to ease the teachers’ administrative load.