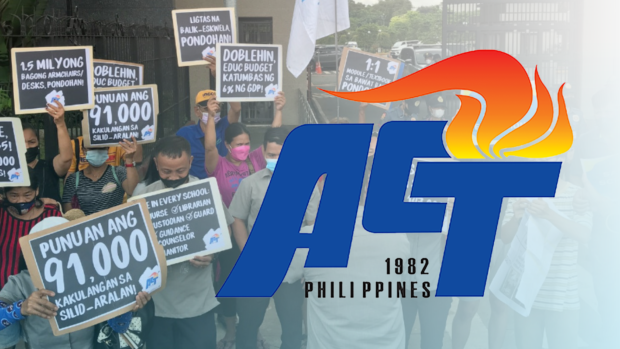 MANILA, Philippines — At least three boxes of documents containing over 57,000 signed petitions from teachers calling for higher wages have been sent to the House of Representatives committee on appropriations, the Alliance of Concerned Teachers (ACT) party-list said.

According to the petition initiated by the party-list group, it is only just for the government to increase the salary grade (SG) of teachers who are overworked and underpaid amid the resumption of face-to-face classes for the current school year.

ACT party-list said the signatories came from their NCR union.

“The overworked, underpaid, and undersupported state of our teachers and education workers sits at the core of the learning crisis and serves as a major roadblock to education recovery,” the petition read.

“It only serves the best interests of the education sector and the nation as a whole to uplift the conditions of our teachers and education support personnel by granting them significant and just salary upgrading and increase,” it added.

ACT hopes the petition will be acted upon by the government, considering that President Ferdinand Marcos Jr. promised to look after the welfare of teachers, who have been left behind regarding salary adjustments over the years.

“Teachers’ salary levels have long been left behind by those of other professions such as the nurses and uninformed personnel. Increased taxes and mandatory contributions have eroded the scant pay adjustments implemented in the past years,” they said.

“President Ferdinand Marcos Jr. has promised in his electoral campaign to take care of the welfare of teachers and of the whole education sector once elected in office. We urge the current administration to alleviate our teachers and education support personnel of their crippling economic hardships by pushing for the legislation and implementation of the following measures,” they added.

For instructors in local and state universities and colleges, the salary would increase from P27,608 to P38,150 for the first step if the government acts upon the petition.

In the letter to committee on appropriations chairperson and Ako Bicol Rep. Elizaldy Co, ACT stressed that it is important that the government allocate funds for teachers’ higher salaries as instructors are often forced to find other jobs to support their families or, in some cases,, find higher-paying jobs overseas.

“As we celebrate the National Teachers’ Month and the World Teachers’ Day, we respectfully submit to your good office the Petition for the Upgrading of Teachers’ Salaries and Salary Increase for Education Support Personnel, signed by 57,209 education professionals and workers nationwide,” ACT said.

“The 2022 pay of those occupying Teacher I positions (P25,439 to P27,514) which compose 52% of the public school teacher population, is even below the current monthly family living wage level of P 29,042, based on the computations of Ibon Foundation. As such, it is no surprise that many of our teachers are forced to find other sources of income to make ends meet, or worse, look for better-paying jobs overseas,” they added.

During the budget deliberations at the House, ACT and other teachers’ groups have called for the allocation of funds intended for salary hikes. However, no major amendment was made to allow a salary increase for entry-level teachers.

Last Wednesday, the House approved House Bill No. 4488, which contains the General Appropriations Bill, but amendments can still be made — either through the small committee created, during the Senate deliberations, or the bicameral conference committee discussions.