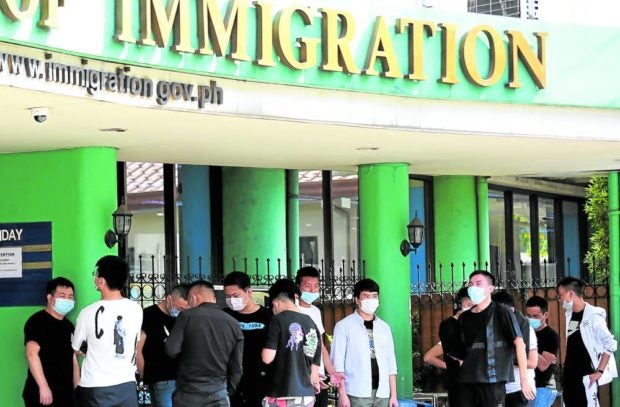 CLOSELY MONITORED | Chinese nationals working for Philippine offshore gaming operators report to the Bureau of Immigration office in Manila, in this photo taken on Feb 28, 2020. Two years later, a great number of them may have to leave the country. (INQUIRER FILE PHOTO)

MANILA, Philippines — Sen. Grace Poe on Tuesday called on the Philippine National Police and the Bureau of Immigration (BI) to start tracking down nearly 49,000 foreign workers of Philippine offshore gaming operators (POGOs) who have expired working visas and are facing deportation.

The lawmaker made the urgent call amid suspicion that the two-month period for these POGO workers to leave voluntarily has given them a chance to go into hiding.

She expressed doubts that the BI and the PNP would be able to effectively carry out the previously announced mass deportation of POGO workers, citing indications that authorities did not know all of the illegal POGO workers’ current whereabouts.

“[The PNP and BI] have reported that more than 40,000 will now be deported. So where are they? Do [they] know where they are?” Poe asked.

The senator was reacting to pronouncements by Immigration Deputy Commissioner Fortunato Manahan Jr. during Monday’s hearing of the Senate ways and means committee that the figure of 48,782 foreign employees of POGOs facing visa cancellation was an estimate based on the number of workers per POGO company whose license had been revoked by the state regulator Philippine Amusement and Gaming Corp. (Pagcor).

“You’re just making a calculation, but you don’t actually know where those individuals are at this point? Announcing about the looming deportation may be good publicity, but truth is, you don’t know where they are now,” she said, addressing BI and PNP officials.

“I can also tell you that by now, many of them are already hiding,” she added, which could purportedly lead to kidnapping and trafficking cases.

The Department of Justice (DOJ) has actually relented on its earlier threat to deport the illegal POGO workers en masse.

On Monday, it said the BI had initiated the visa cancellation of foreign nationals working for POGO companies whose licenses had been canceled by Pagcor.

Justice Undersecretary and spokesperson Jose Dominic Clavano IV explained that the cancellation was more economical for the government as the procedure would simply allow the Chinese nationals to voluntarily exit the country at their own expense within a nonextendible period of 59 days. 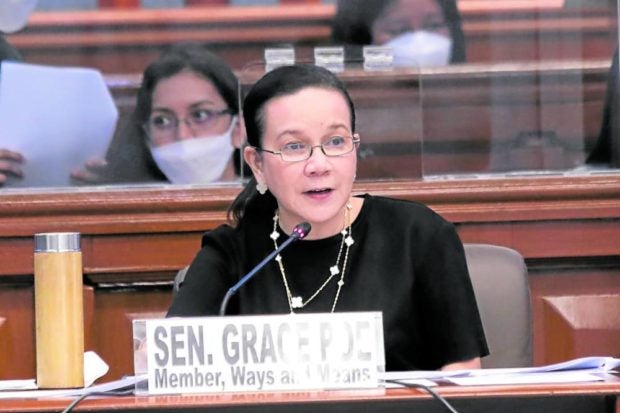 It is only after the foreign nationals refuse to leave the country during this period that summary deportation would be resorted to, the official noted.

Within this month, Clavano said the agency was hoping that it would be able to cancel the visas of the illegal POGO employees.

Backing the position taken by the Department of Finance (DOF), Poe reiterated her stand on the “significant social cost” that the country has to pay in hosting POGOs that was not commensurate with the added revenues they provide.

“Despite what we have been made to believe, the POGO industry is not an essential sector of the Philippine economy. Based on the latest (DOF) data, the Pogo sector accounts for only 0.03 percent of our gross domestic product,” she said.

Contrary to claims that Pogos would bring more jobs, POGOs hired only one Filipino for every four employees, Poe pointed out, citing records from the Department of Labor and Employment.

She said the purported “property glut” that the shutdown of the Pogo industry would bring could be offset by bolstering the country’s business process outsourcing, tourism and agriculture sectors.

At the same time, Sen. Risa Hontiveros said she was enraged by reports that sexually transmitted diseases (STDs) have been spreading among Pogo workers, another “headache” brought to the country by the offshore gaming industry.

“It is sickening that these Pogo firms no longer know any sense of decency. We gave them a space to do business, but instead of helping our economy, they muddied our society: from corrupting the immigration bureau, (bringing in) prostitution and human trafficking, and this time, STDs,” she said.

DOJ alarmed over spread of STDs among POGO workers