DOJ alarmed over spread of STDs among POGO workers 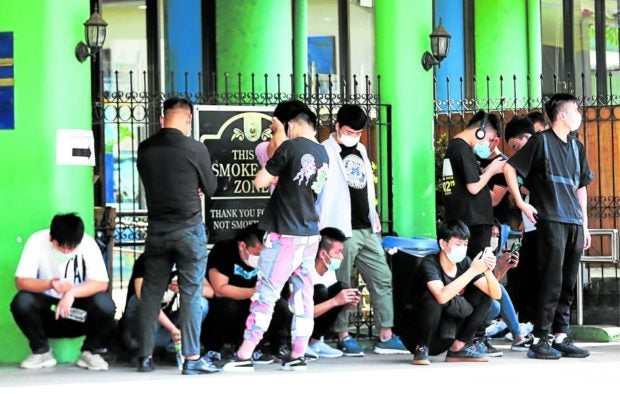 FOREIGN WORKERS | In this photo taken in February 2020, Chinese citizens working for Philippine offshore gaming operators gather at the Bureau of Immigration office in Manila to process their documents. (INQUIRER FILE PHOTO)

MANILA, Philippines — The Department of Justice (DOJ) on Monday raised alarm over the alleged spread of sexually transmitted diseases (STDs) among foreign nationals working for Philippine offshore gaming operators (POGOs) in the country.

He did not provide details, saying they have yet to determine the extent of the prevalence of the cases among POGO workers.

But Clavano said that based on the reports the DOJ received, there were around 15 to 20 cases of STDs reported in a POGO company alone.

“We just hope that our ongoing operations to deport or cancel the visas of these foreign workers, we could be able to stop the spread of the disease. We will not wait for this to affect our fellow Filipinos,” he said, adding that the National Bureau of Investigation has been instructed “to determine the full extent of this.”

“We hope all the crimes and all the ill-effects brought by the continued stay of these Chinese and other foreign nationals would end because of our operations,” Clavano added.

In January 2020, Sen. Risa Hontiveros disclosed during a Senate inquiry that sexual services were being offered in Chinese prostitution dens often disguised as massage or spa facilities. This was confirmed by the NBI then, which said that customers of sex dens previously raided by law enforcers were mostly Chinese Pogo employees.

On the deportation of overstaying POGO workers, the DOJ said the Bureau of Immigration (BI) had initiated the visa cancellation of 48,782 foreign nationals, mostly Chinese, working for POGO companies whose licenses to operate had either been canceled or revoked by the state regulator Philippine Amusement and Gaming Corp.

It explained that the cancellation was more economical for the government as the procedure would simply allow the Chinese nationals to voluntarily exit the country at their own expense within a nonextendible period of 59 days.

It is only after the foreign nationals refuse to leave the country during this period that summary deportation would be resorted to, it added.

“Within the month of October, we hope to cancel all the visas of the employees of POGO companies whose licenses have been canceled,” Clavano said.

According to the DOJ, the BI was also set to deport 331 Chinese and 41 other foreigners rounded up in separate operations of the NBI and the Philippine National Police in Pasig City and Angeles, Pampanga, last month.

More than 3,000 POGO workers, on the other hand, have been issued police clearances so far, PNP chief Gen. Rodolfo Azurin Jr. said on Monday.

Since the Senate initiated an inquiry into the spate of kidnappings involving POGO workers, the PNP also reported that not a single incident of abduction and other Pogo-related crimes had been recorded in Metro Manila and nearby provinces.

“Since we had the (Senate) hearing, as of today, we did not have a kidnapping incident in Metro Manila,” National Capital Region Police Office chief Brig. Gen. Jonnel Estomo said at the hearing led by Sen. Sherwin Gatchalian, chair of the Senate ways and means committee.

Sen. Francis Escudero, meanwhile, challenged the claim of the Department of Finance (DOF) that the “social costs” and “reputational risks” that the country was facing “far outweigh” the revenues generated by POGOs.

He said the DOF should not “arbitrarily” make such conclusion after Finance Assistant Secretary Valery Joy Brion admitted that the department did not have actual computation on the social costs of POGOs.

“At what point should we be earning from POGOs for you to say that the benefits will overcome the social costs?” Escudero asked.

“If [that conclusion] is not based on figures, where is it based? Interviews? Surveys? Perception? Emotion? Fear?” he continued.

In the Senate hearing, Brion stood firm on the position of the DOF that the continued operation of POGOs posed a “reputational risk” for the Philippines that would actually drive away foreign investments.

“Pogo’s modest contribution to the economy does not outweigh the social costs of its continued operations, especially that there is an alarming increase in undesirable criminal activities in the Pogo sector,” Brion said.

“While POGO revenues contribute to the government coffers, this comes at a significant social cost to us. We’ve seen some studies and POGO links to some illegal activities, prostitution, employment of minors, and violation of labor laws,” she said.