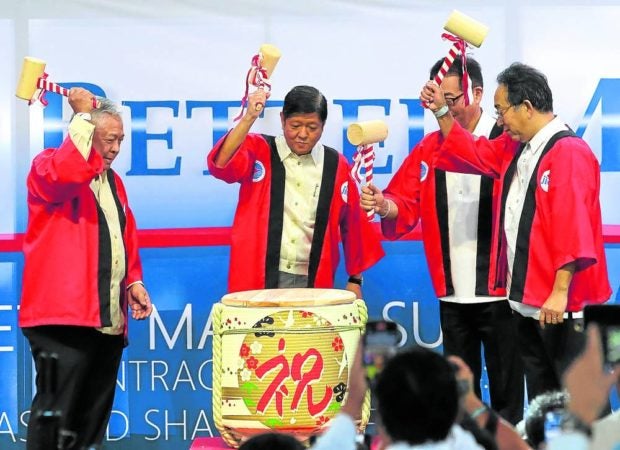 MANILA, Philippines — President Ferdinand Marcos Jr. on Monday led the inauguration of a portion of the Metro Manila Subway Project in Pasig City, vowing to pursue more infrastructure projects that will benefit Filipinos.

“Let the [groundbreaking] of this subway system signal our intention to the world to pursue even grander dreams and more ambitious endeavors that will bring comfort and progress to our people all over the country,” the president said in his speech at the event held at the Metrowalk Commercial Complex in Pasig City.

“Be assured that this administration will take the lead in identifying, pursuing and implementing projects as part of the Build Better More Infrastructure Agenda that we have laid out,” he added.

The ceremony was for the subway’s P17.7-billion Contract Package 104, which covers the construction of the Ortigas and Shaw stations that was given last April to the consortium of Megawide Construction Corp., Tokyu Construction Co. Ltd., and Tobishima Corp.

The Department of Transportation (DOTr) is set to award two more contract packages of the project before the year ends.

Transportation Undersecretary for Railways Cesar Chavez said on the sidelines of the groundbreaking ceremony that the signing of Contract Packages (CP) 102 and 103 was expected to be held by the end of this month or the first week of November.

CP 102, which was won by Nishimatsu-DMCI Joint Venture, includes the construction of the Quezon Avenue and East Avenue stations. CP 103, which is set to be awarded to Sumitomo Mitsui Construction Corp., covers the works for the Anonas and Katipunan stations.

Half a million passengers a day

In his speech, the president said he looked forward to the “brighter days” when the Filipino public would be enjoying the project’s benefits.

“Although it is a given that the construction of these structures will take time and cause disruption, let us be optimistic and just count these small inconveniences as a small price to pay for the fruitful results that this program, this project will yield,” Marcos said, referring to the six-year closure of portions of Meralco Avenue.

The president said that once completed, people would be spared from the perils of commuting while the new infrastructure itself is expected to bring more business opportunities.

“As our people gain more time by cutting long hours of travel, they can now engage in more worthwhile and productive endeavors, making time for greater self-improvement or, equally important, spending quality time with their families,” he said.

The 17-station, 33-kilometer project, which will benefit some 519,000 passengers a day once completed by 2028, is the first underground railway in the Philippines that will connect Valenzuela City to Pasay City.

It will reduce travel time between Quezon City and the Manila airport from an hour and a half to 35 minutes.

The project is being constructed under the Official Development Assistance program of Jica, which will finance 76 percent of the project via a P370.8-billion loan package. The remaining 24 percent, amounting to P117.7 billion, will be paid for by the Philippine government.

The idea of building a Metro Manila subway was first proposed in 1973 during the administration of Marcos’ late father and namesake, Ferdinand Marcos Sr.

In August 2016, the Duterte administration revived the plan for a Metro Manila subway as part of a long-term public transportation network to fight the worsening road congestion.

The DOTr targets to partially commence subway operations in 2025.

“We are running at full speed on this project. We owe it to the commuting public,” Bautista said during the event.