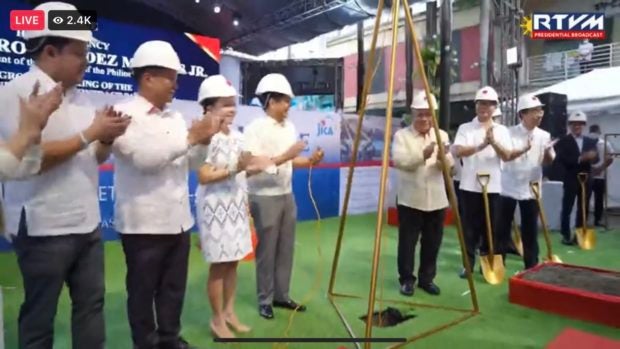 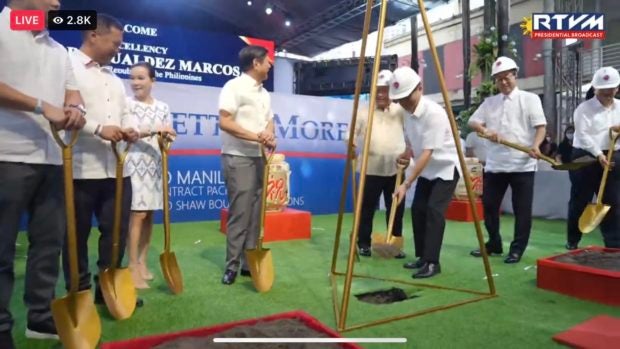 President Ferdinand “Bongbong” Marcos Jr. graces the groundbreaking ceremony for the 2 stations of the Metro Manila Subway project in in Pasig and Mandaluyong City Monday morning. (Screengrab from RTVM)

In his speech during the groundbreaking ceremony for the the Ortigas and Shaw Boulevard stations, Marcos said Phase 1 of the project is expected to cut travel time between Quezon City and Ninoy Aquino International Airport from 90 minutes to 35 minutes.

“We fervently hope to soon enjoy the benefits that it brings to the general public,” he said.

“With accessible designated stations that can cater to a massive volume of passengers, we anticipate helping our people skip the long lines of traffic and even spare themselves from the perils of commuting,” the President stated.

He added that the project can drive up business opportunities and economic activity in the long run.

“Although it is a given that the construction of these structures will take time and cause disruption, let us be optimistic and just count these small inconveniences as a small price to pay for the fruitful results that this program, this project will yield,” Marcos said.

The Metro Manila Subway, once completed, will be the country’s first underground railway system.

As construction of Phase 1 starts, the Department of Transportation said a portion of Meralco Avenue in Pasig City – from Capitol Commons to Shaw Boulevard – will be closed.

Traffic will be rerouted starting October 3, Monday, until year 2028 to give way to the construction.

The subway project is supported by loans from the Japan International Cooperation Agency.

DOTr said the whole Metro Manila subway system will run from Valenzuela to Bicutan, or more than 33 kilometers, with 17 stations.

Once operational, the subway can accommodate more than 519,000 passengers a day and will ralso educe travel time from Valenzuela City to Bicutan to just 45 minutes.