Peso depreciation: ‘Preparing for the worst’ 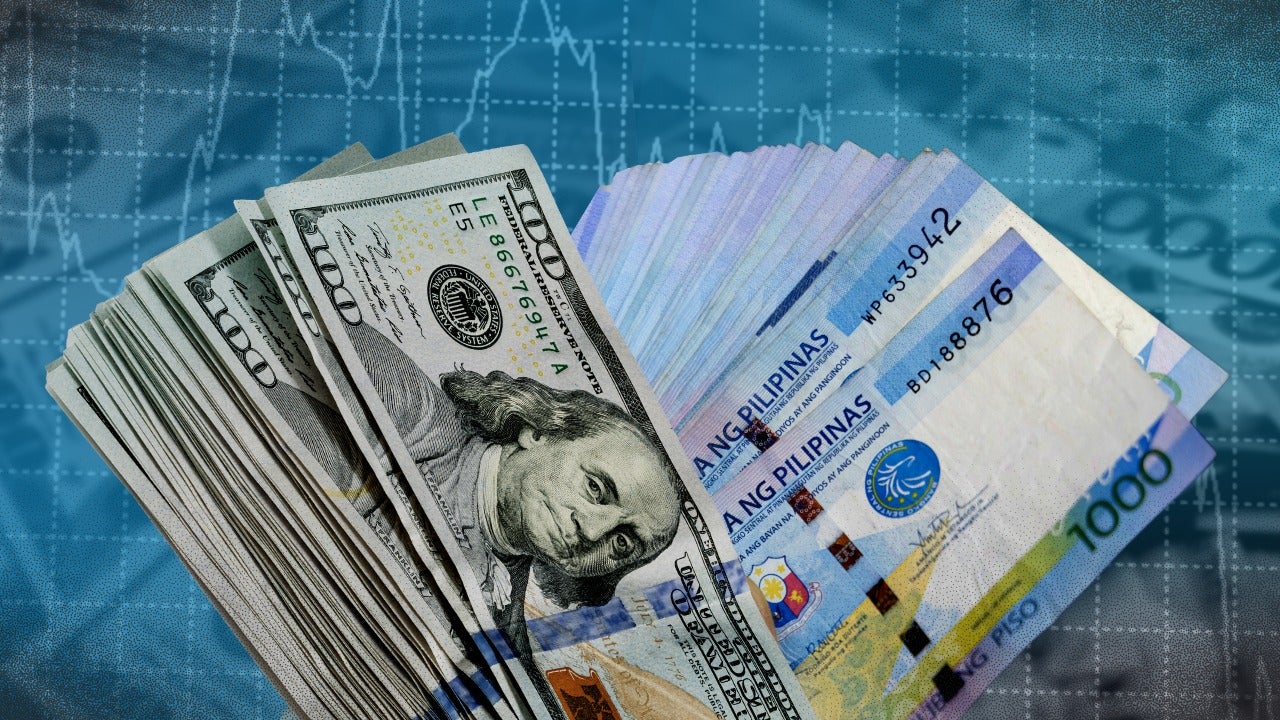 MANILA, Philippines—As many weigh in on the benefits and risks of the peso’s depreciation, an economist suggested that the country should “prepare for the worst.”

In July, almost a month after the peso started depreciating swiftly after hitting 53:$1 on June 10, Finance Secretary Benjamin Diokno said the public should not feel concerned yet with the peso depreciation.

Aside from considering the benefits of the peso’s losses, Diokno explained that one way to assess the peso’s performance is by looking at how it compares with other currencies.

“You should not be concerned with the peso because the right way to look at the peso is if [it’s] competitive. How do you measure that? The technical term is real effective exchange rate,” the chief economic manager said.

“How does it compare with other currencies? We’re in the middle of the pack, so our currency is competitive,” he added.

In the same month, the peso closed at P55.67 against the US dollar. According to banking giant DBS, on a year-to-date basis, the peso has depreciated the most among currencies in the six largest economies of the Association of Southeast Asian Nations (Asean).

“Relative to Korea (won), relative to the Japanese yen, to the (British) pound, the Philippine currency is middle of the pack. If one takes a global view of the currency, it is actually quite stable, especially given this very difficult pivot of the US Fed,” Medalla said.

Citing what he said was the “good” side of the current peso depreciation—benefits to exporters, OFWs, tourism industry, and some domestic producers—economics professor and former socioeconomic planning secretary Cielito Habito said the government must be cautious of a rise in the inflation rate.

“We should not necessarily look at what’s happening as entirely bad news because there is a lot of good news in it. But it is to be admitted that because the peso is depreciating so much, the inflation is already being affected as well,” Habito told INQUIRER.net.

“Yes, there are winners, but the general public is also getting affected by higher inflation,” he added.

Last August, Medalla noted that the peso’s depreciation against the US dollar is adding inflationary pressure. 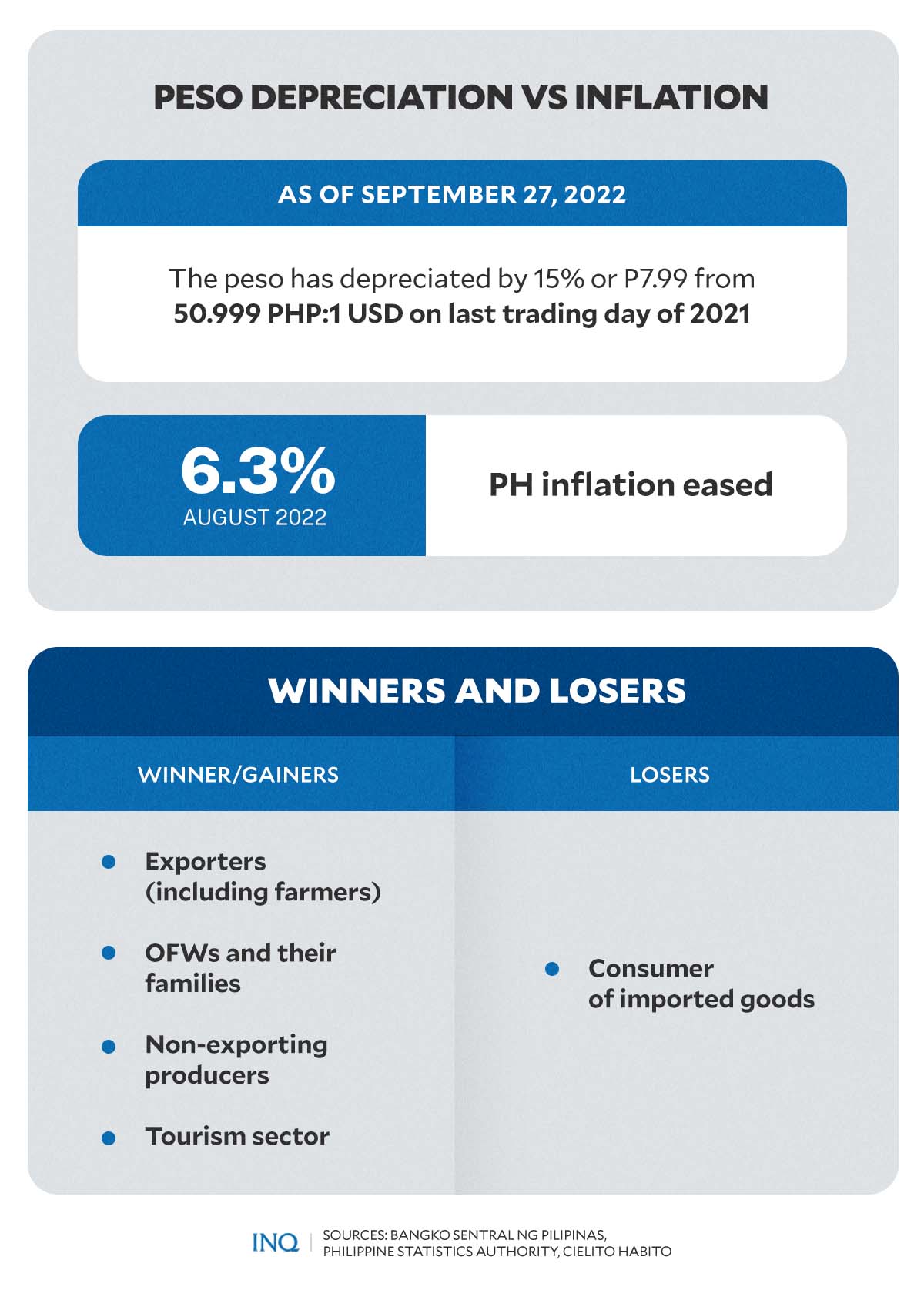 “There’s too much depreciation, that is bad on the inflation for the economy. And the central bank raises interest rates, of course, that will also affect the economy,” Medalla said at the Development Budget Coordination Committee’s (DBCC) briefing for the House Committee on Appropriations.

Former Philippine central bank deputy governor Diwa Guinigundo previously explained that “as a rule of thumb, every 1 percent decline in the value of the peso against the dollar results in an increase in the national inflation rate by 0.06 percent.” 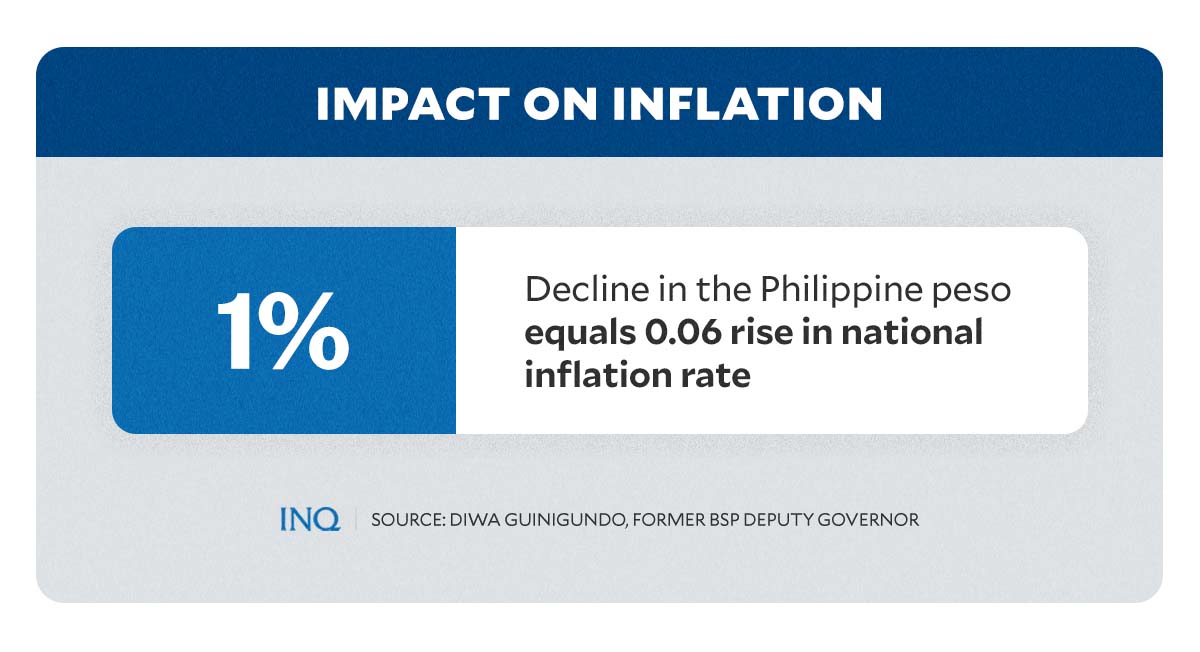 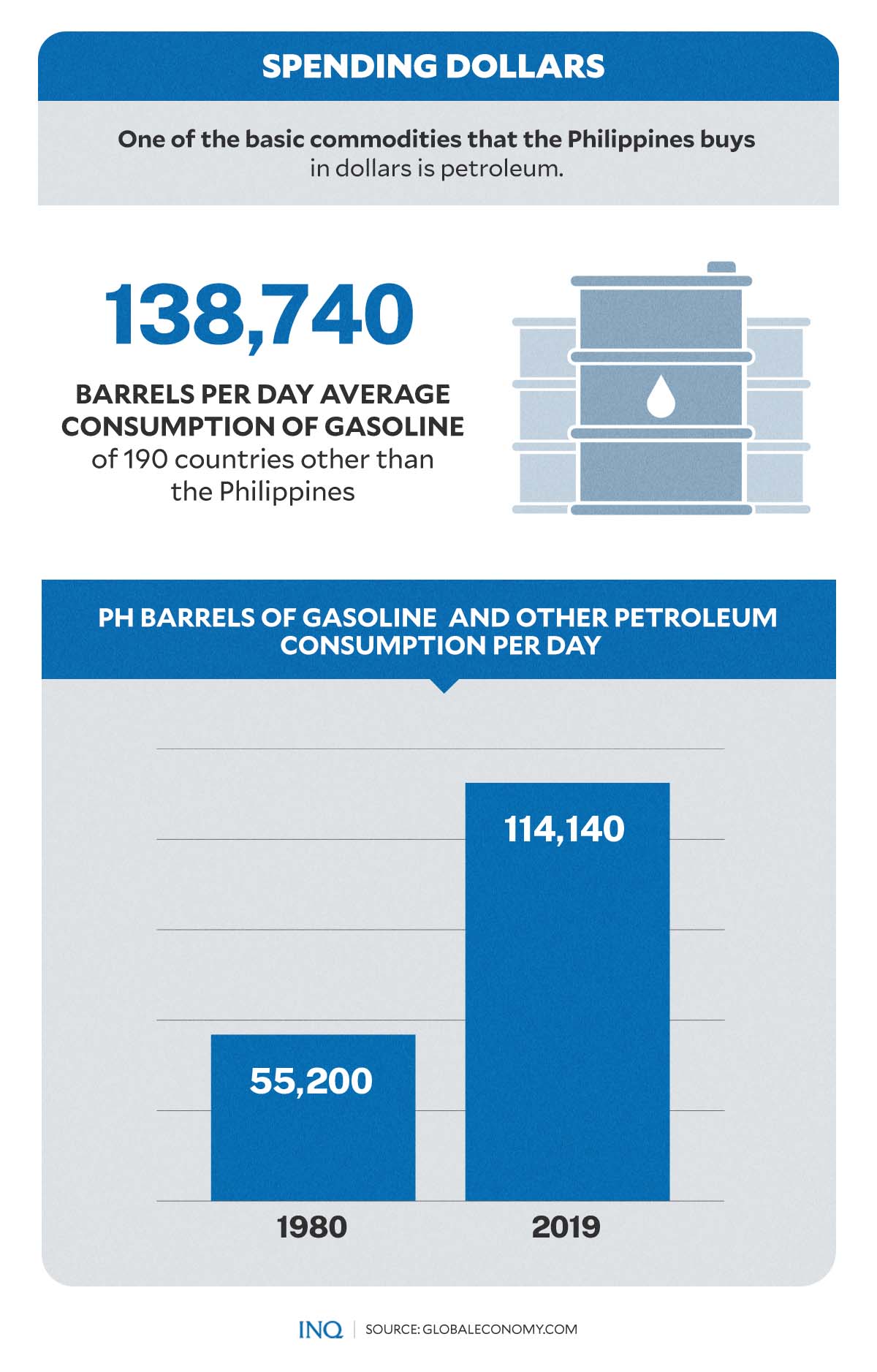 According to the Philippine Statistics Authority (PSA), in August, the rate of increase in prices of basic commodities slowed slightly for the first time in six months, to 6.3 percent from 6.4 percent in July.

READ: High inflation expected for rest of the year

However, according to BSP, an increase in the price of electricity and key food items as well as a weaker peso may have pushed up Philippine inflation to within 6.6 and 7.4 percent in September.

READ: September inflation may have hit high of 7.4%, says BSP

‘Prepare for the worst’

In September, Albay Rep. Joey Salceda, also an economist, said the Philippine peso could further depreciate to P65 to P68 against the US dollar in the coming days. This, according to Habito, is a “credible” and “very plausible” projection.

“The message, I guess, for everybody, including the government, is to really keep preparing for the worst. Make sure that we will be able to do the necessary interventions or steps to minimize the adverse impact of that,” Habito said. 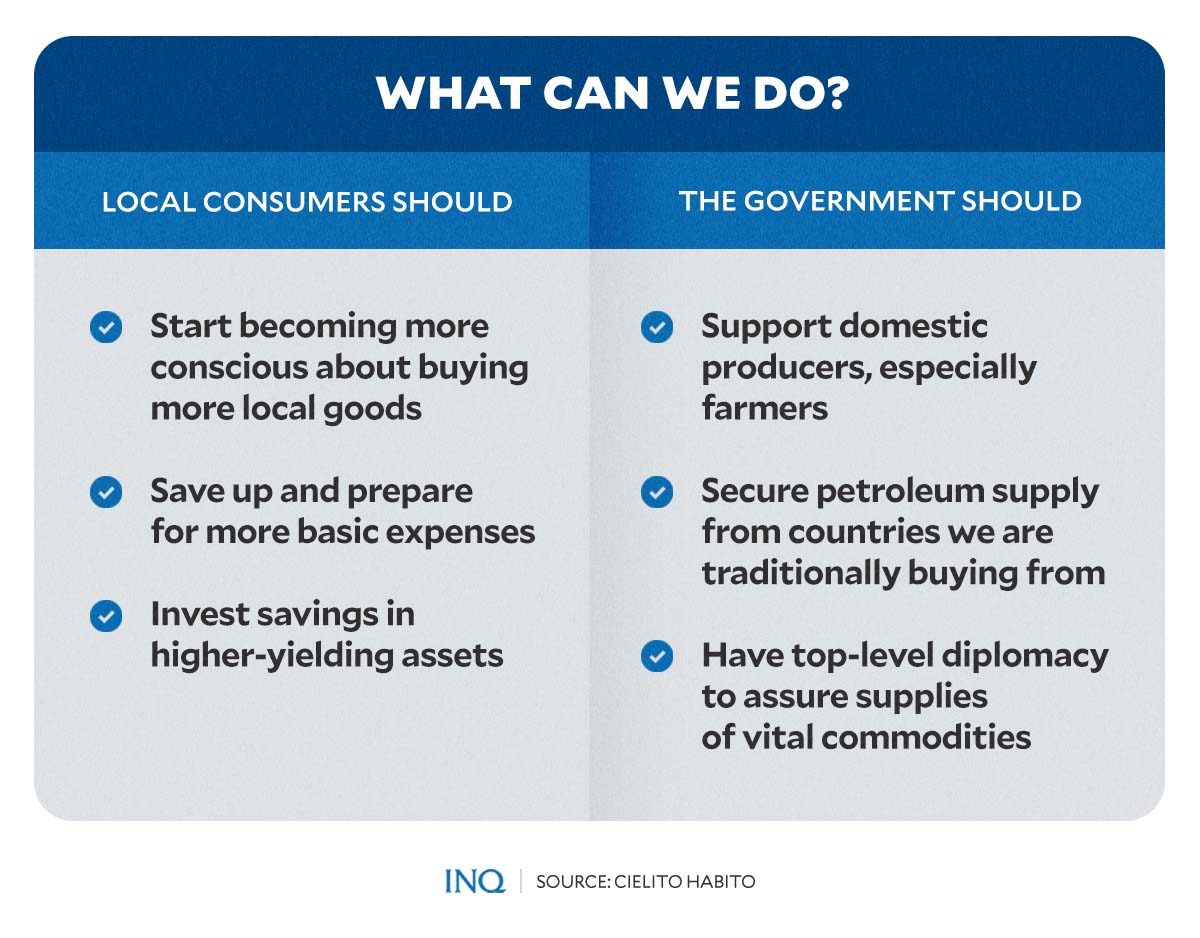 “We as ordinary consumers have to really be expecting worse times,” he said, adding that this might be the time to save up and prepare for more expenses as prices of basic needs are expected to go up. He also suggested taking up opportunities to invest savings in higher-yielding assets.

When asked whether people should begin being concerned about the current depreciation of the local currency against the US dollar, Habito said the public should feel concerned that the falling peso is leading to prices going up.

“That’s why in whatever we do, we must try to manage that relationship between the exchange rate and prices,” he added.

While preparing for the “worst,” the government, according to Habito, could boost the country’s domestic food production to lessen the dependence on food imports. The government should also try to secure the country’s petroleum supply from countries the Philippines is traditionally buying it from.

“Top-level diplomacy is needed in certain cases to assure our supplies of vital commodities, including food,” he added.

Meanwhile, people can help minimize the country’s need for imports—which are pricier as the peso depreciates—by purchasing local goods and supporting the local community.

“Buy more local. Something that all of us should keep in mind is that buying local is not only about buying domestic, but also buying from our local communities to enliven our own immediate communities,” he said.

“If all prayers are answered, I’m sure a lot of people are praying…most people are hoping that within two years at the most, things will stabilize worldwide. Things will definitely get better. Unfortunately, things may still get worse before they get better.”