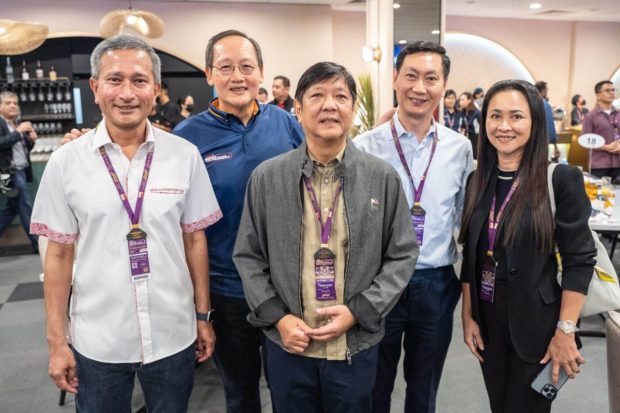 MANILA, Philippines — Several groups and lawmakers have criticized President Ferdinand “Bongbong” Marcos Jr.’s attendance in the Formula One (F1) Grand Prix in Singapore over the weekend.

On Monday, however, Malacañang finally admitted that Marcos had traveled to Singapore, calling it a “productive” weekend since he had spoken with a Singaporean official at a conference.

A photo of Sandro enjoying a drink with actress Alexa Miro was uploaded on the official website of the event organizers, while Singaporean Prime Minister Lee Hsien Loong also shared photos from the race, including one with Marcos and his first lady Liza.

“Happy to link up again with friends from both here and abroad. They were excited to be here, to watch the race and enjoy the good company,” he wrote on Facebook.

‘Junket in times of economic hardship’

Gabriela Rep. Arlene Brosas has since lambasted the President’s weekend trip, saying this was “very telling of his lack of sympathy towards poverty-stricken Filipinos.”

(The floods in fields hit by typhoon Karding have not yet subsided, but the President has already flown to Singapore to watch the F1 Grand Prix. Good for Marcos Jr. who has the budget to purchase VIP access for him and his family, while the Filipino people are struggling with rising prices of basic commodities.)

She went on to say that Marcos’ “lavish lifestyle” is among the reasons the Gabriela Partylist is “very critical” of the confidential and intelligence funds of several government agencies, including the Office of the President.

Echoing the concerns raised by Brosas, House Deputy Minority Leader and ACT Teachers Rep. France Castro urged the Malacañang and the Armed Forces of the Philippines for an explanation of whether Marcos had used government resources for an “obviously personal, extravagant, and frivolous junket in times of economic hardship.”

If found true, Castro said, “it is like a punch in the gut of hungry Filipinos.”

“As it is, his whole Singapore Grand Prix trip is insensitive and callous in light of the suffering of Filipinos,” she added.

Meanwhile, Renato Reyes Jr., secretary general of the Bagong Alyansang Makabayan (Bayan), blasted Malacañang’s belated confirmation of Marcos’ visit to Singapore, asserting that this “shows that the Palace is either clueless as to the nature of the trip or Philippine officials were trying to hide the actual details of the trip.”

“We would like to remind Malacañang that anything that involves public funds and resources requires transparency. We saw none of that last weekend,” he said in a series of tweets.

Reyes then pressed for answers on how much of the Filipino taxpayers’ money was used for the trip.

“Again, we assert that the Singapore F1 weekend getaway by Marcos and [his] family was insensitive, unnecessary, and irresponsible, given the crisis that the nation is in. Only the utterly callous and shamelessly entitled would not get this point,” he added.