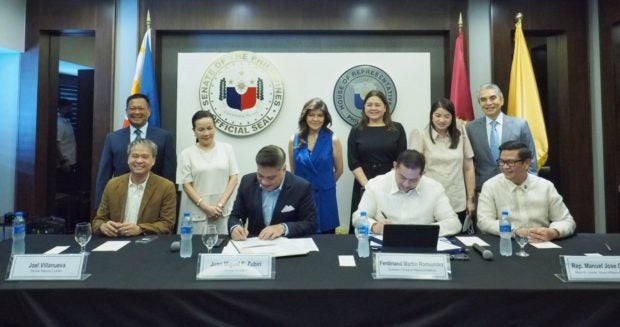 MANILA, Philippines — Two bills that have been ratified by Congress are now up for President Ferdinand Marcos Jr.’s signature.

The signed copies of the enrolled measures were given to Presidential Legislative Liaison Office Secretary Mark Llandro “Dong” Mendoza for the president’s approval and signature.

“Hopefully these first enrolled bills will now turn into our first two laws,” Zubiri said in a statement.

“Nakakabuo na tayo ng maganda at effective na working relationship with the House, and if our bicameral sessions for these two bills are anything to go by, then I think we can all expect to have a very active and productive 19th Congress,” he continued.

(We formed a good and effective working relationship with the House, and if our bicameral sessions for these two bills are anything to go by, then I think we can all expect to have a very active and productive 19th Congress.)

The Senate president stressed that the Congress has been pushing for the SIM Registration Act for a long time while the Barangay and SK Elections Postponement Act is “very time-sensitive.”

The SIM registration bill seeks to curb SIM-aided crimes such as scams through registering the personal details of the end-user.

“We need this law. Masyado nang laganap ’yung mga text at online scam (Text and online scams are too widespread),” noted Zubiri, author and co-sponsor of the Senate Bill No. 1310, the Senate’s version of the SIM registration bill.

(Scammers keep on finding creative ways to trick people, and we can’t stop or even trace them because they are anonymous. New scam, new SIM, it is that easy.)

Romualdez, for his part, said in a separate statement: “This (SIM Registration Act) may be the first legislative measure to be signed into law by President Bongbong Marcos. Once enacted into law, this will be our first line of defense against scammers, con artists, and criminal elements who use cellphone and other electronic communication gadgets for nefarious activities.”

Romualdez is the principal author of House Bill No. 14, the House’s version of the SIM registration bill.

In the 18th Congress, a previous version of the measure was vetoed by then President Rodrigo Duterte due to the social media provision.

Zubiri, however, believes that the bill will hurdle the Marcos administration.

“I am confident that the administration sees the urgent need for this bill. We have also addressed the concerns regarding social media registration raised in the previous veto, so umaasa tayong wala nang magiging problema dito (we expect that this will not have a problem),” the Senate president said.

Meanwhile, the Congress is seeking to delay the December 5, 2022 polls to the last Monday of October 2023 through the Barangay and SK Elections Postponement bill.

Both chambers of Congress ratified Senate Bill No. 1306 and House Bill No. 4673 — their respective versions of the barangay and SK poll postponement measures — on September 28.