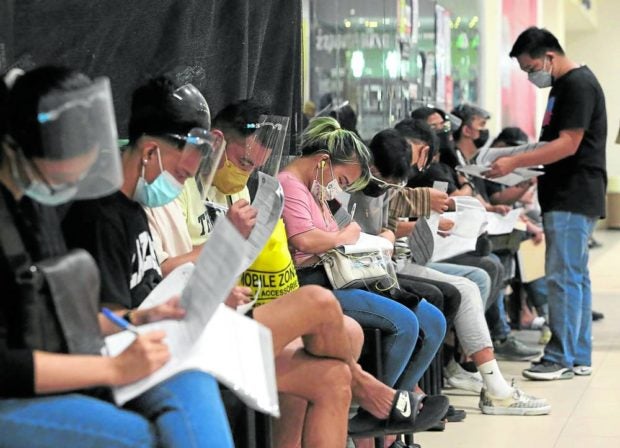 NEW VOTERS People wait in line during the last day of voter’s registration at a mall in Manila in this 2021 file photo. —MARIANNE BERMUDEZ

MANILA, Philippines — The Senate ratified on Wednesday the reconciled version of a bill that seeks to postpone the barangay and Sangguniang Kabataan (SK) elections.

During the Senate plenary session, Senator JV Ejercito presented the reconciliations of the bicameral conference committee on the Senate and House versions of the measure, Senate Bill No. 1306 and House Bill No. 4673, respectively.

Ejercito reported that the bicameral panel agreed to defer the said polls from December 5, 2022 to the last Monday of October 2023, which falls on a 30.

“The Conference Committee agreed to use the Senate version as the working draft. After much deliberation, it was agreed upon by the members to hold the next synchronized Barangay and Sangguniang Kabataan Elections on the last Monday of October 2023,” Ejercito said, substituting for Senator Imee Marcos, sponsor of the bill, who was absent during the plenary.

“The subsequent Barangay and Sangguniang Kabataan Elections will then be conducted every three years thereafter,” he added.

The bicameral panel came up with the date based on three considerations: a precedence of holding the synchronized barangay and SK elections in October; the date usually falls on the school break of youth voters; more cost-effective with reference to the position paper and computation of the Commission on Elections.

The elected barangay and SK officials will start their term of office at noon of November 30, 2023, said Ejercito.

Senate Bill No. 1306 hurdled the Senate on Tuesday while it was passed in the House of Representatives last week.