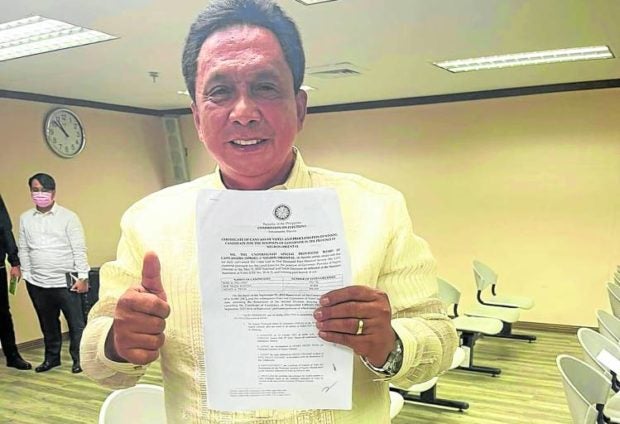 I’M BACK | Former Negros Oriental Gov. Roel Degamo on Monday shows the Commission on Elections’ Certificate of Canvass of Votes and Proclamation of Winning Candidate that made his victory in the May gubernatorial race official. (Photo from the Facebook account of Roel Degamo)

The Commission on Elections (Comelec) on Monday officially declared Roel Degamo, who was then seeking reelection, as the winner of the Negros Oriental gubernatorial race in the May 2022 polls.

The special board of canvassers, which convened on Monday at the Comelec Manila office, said the results from the canvassed 1,471 clustered precincts in Negros Oriental showed Roel Degamo got the highest number of votes at 331,726, followed by the current sitting governor, Pryde Henry Teves (301,319), and with Doc Mark Macias (45,454) coming in third.

Monday’s proclamation of the winning governor came days after the poll body nullified the victory of Teves in the May polls, who was then declared the victor with 296,897 votes garnered against Roel Degamo’s 277,462 votes.

The Comelec however ruled that the 49,039 votes received by another gubernatorial aspirant named Grego Gaudia, but who used the name “Ruel Degamo,” belonged to the reelectionist governor as Gaudia had been declared a nuisance candidate.

The Comelec declared “Ruel Degamo” a nuisance candidate on Dec. 16, 2021. But since there was no final Comelec en banc ruling by Election Day on May 9, his name remained on the official ballot. Gaudia, through his lawyer, had filed a motion for reconsideration but on Sept. 1, the Comelec denied the appeal.

In a post on Facebook on Monday, Roel Degamo expressed his gratitude for having been given the chance to serve Negros Oriental again as its governor.

“Finally justice is served. Thank you to all those people in Negros Oriental who prayed for me. I promise to serve you as the governor of this province,” he said. “Dalaygon ang buhi nga Dios. (Praise be to the living God). In God we trust.”

There was no information yet when Roel Degamo could formally assume the post now held by Teves.

Teves, who assumed the post on June 30, 2022, did not say if he would step down anytime soon, but said he was willing to follow any order should it come from the Supreme Court (SC).

He also assured he would not initiate any action that could create tension at the Capitol.

Teves, however, did not say when his camp filed a petition at the SC to contest the Comelec ruling, citing the sub judice rule, which prohibits public discussion of matters before the court.

“We can do everything humanly possible under the law. We will exhaust all available legal remedies so we will know if what we claim as ours is really ours,” he said in Cebuano.

No reason to panic

Last June 30, tension rose at the provincial capitol building based in Dumaguete City after at least 100 supporters of Roel Degamo gathered in the area to stop Teves from assuming his post but Roel Degamo eventually gave in.

Teves assured authorities there will be no “rallies or barricades” at the Capitol in case authorities will ask him to step down.

He said many people asked why he was not panicking. His response: “Why panic? I just have to do what I ought to do everyday. If God will say that it (public service) is my mission, then let it be. If not, then that’s it.”