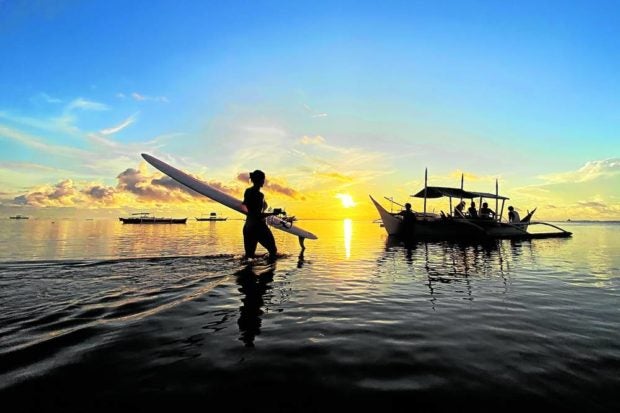 MORNING SURF | As the sun rises, a surfer walks across the shallow tidal flats of General Luna town on Siargao Island, Surigao del Norte province, toward a boat that will bring her and other tourists to a popular surf break. (File photo by ERWIN MASCARIÑAS / Inquirer Mindanao)

SAN FRANCISCO, Agusan del Sur, Philippines — Surigao del Norte Gov. Robert Lyndon Barbers said there was no politics behind the province’s hosting of Siargao’s national surfing competition amid an ongoing similar fest staged by his political opponent on the island.

Barbers said they even decided to move the event’s opening from Oct. 3 to Oct. 5 to allow General Luna, a municipality on Siargao Island, to finish its event on Oct. 4 and join the provincial event.

Barbers, known to be at odds with General Luna Mayor Sol Matugas and her husband, former Gov. Francisco Matugas, maintained the province’s hosting of the national surfing competition in Siargao was not about political positioning but an effort to boost tourism in the province devastated by the effects of the COVID-19 pandemic and Typhoon Odette (international name: Rai) that struck the area in December last year.

“There is no conflict [between the province and] the LGU (local government unit) of General Luna,” said Barbers, who defeated then reelectionist Gov. Francisco Matugas in the last elections. In 2019, it was Francisco Matugas who won the governor’s seat against Barbers.

The General Luna mayor is hosting the ongoing 1st Mayor Sol’s National Surfing Competition, which opened on Sept. 28 and was supposed to end on Oct. 1 but was extended to Oct. 4, at the famous Cloud 9 surfing spot in General Luna, an area that served as the venue of World Surfing League in the past years.

Barbers said the national competition, sanctioned by the United Philippine Surfing Association (UPSA), would serve as a qualifying event for the 26th International Siargao Surfing Cup to be held on Oct. 15 to Oct. 21, also on Cloud 9.

Barbers’ surfing contest, however, will be held at the Tuwason surfing spot from Oct. 5 to Oct. 9 and at the Tangbo Point in Sta. Monica town from Oct. 10 to Oct. 13.

It was not clear if the surfers who participated in the Mayor’s Cup would be the same competitors in the Governor’s Cup.

Barbers, in a statement on Monday, said the Governor’s Cup was meant to help struggling surfers earn maximum points to level up their national rankings after two years of absence and to give a much-needed boost to the tourism industry of Siargao Island by introducing other world-class surfing spots outside of Cloud 9, such as Tuwason Point, which is adjacent to Cloud 9, and Tangbo, a surfing spot located at the other end of the island that was recently discovered by expert surfers.

Gino Canlas, a member of the UPSA board of directors, said at least 200 national surfers were expected to join the Governor’s Cup.