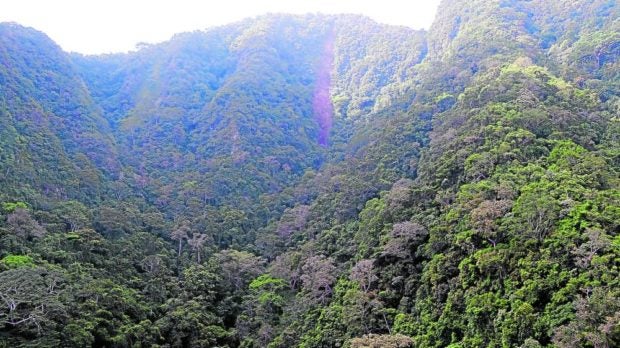 DENT | Landslides at the summit of Mt. Arayat in Pampanga are visible in this aerial shot taken on Sept. 27, a few days after Super Typhoon Karding (international name: Noru) battered Luzon. According to state geologists, landslide debris, such as boulders, will gush down to Sapang Maeyagas, one of four creeks draining from the inactive volcano, putting at risk over 1,500 households near the area. (Photo courtesy of the Pampanga Provincial Disaster Risk Reduction and Management Council)

The sensors in the early warning system of the provincial government detected “intense ground vibrations” between 10:30 p.m. and 11:30 p.m. on Sept. 25 as Karding struck Central Luzon, said Dr. Mahar Lagmay, executive director of the University of the Philippines Resilience Institute in an online meeting with Pampanga officials.

Lagmay said the intensity of rainfall at that time peaked at 78.4 millimeters.

Separate aerial surveys done through drones by the Provincial Disaster Risk Reduction and Management Council (PDRRMC) and the Mines and Geosciences Bureau (MGB) verified fresh landslides from the summit down to Sapang Maeyagas, one of four creeks draining from the inactive volcano in the town of Arayat.

Noel Lacadin, chief of the MGB geology section in Central Luzon, said the Maeyagas Creek was the same landslide path when Typhoons Ondoy (Ketsana), Santi (Nari), and Ulysses (Vamco) lashed at Mt. Arayat in 2009, 2013 and 2020, respectively. Landslides killed 12 people during Ondoy and a policeman during Santi.

Zacarias Daniel Baricuatro, PDRRMC geologist, said the new landslides occurred in a strictly protected area with high to very high susceptibility to debris flows, so no residents lived there.

Baricuatro said the current volume of debris likely to flow down, mostly boulders as big as two-story houses, would have to be estimated by ground surveys.

According to Lacadin, the volume reached 66,000 cubic meters before Karding struck.

Gov. Dennis Pineda ordered simulation exercises for the evacuation of 1,531 households in Purok (subvillage) 4, 5, 6 and 7 in Barangay San Juan Baño to a designated safe zone.

He said engineering interventions, such as the reinforcement of a deflector dike, would be undertaken later.

“But they came back because they were below the summit,” he said at the meeting.

Lagmay said the distance between the landslide area and the subvillages gives a lead time of two hours to evacuate.

Pineda said the affected residents must be able to move out of harm’s way within minutes.

Close to 4,000 Central Luzon folk still in evacuation sites due to Karding