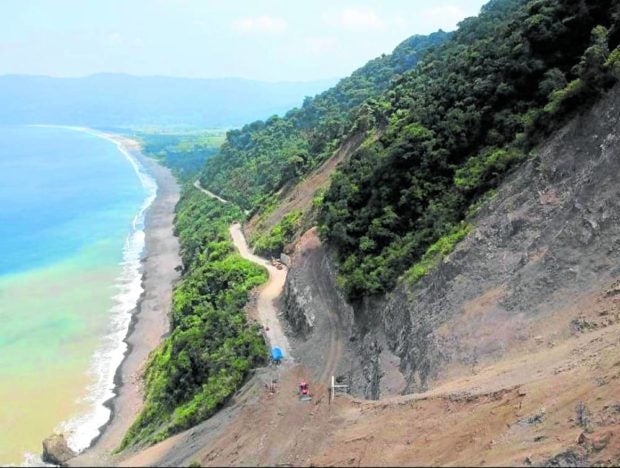 BLOCKED The landslides along the section of the Manila North Road at Barangay Pancian in Pagudpud, Ilocos Norte, on Sept. 10 have restricted travel between the coastal town and its neighboring localities in Cagayan province. —PHOTO COURTESY OF THE DEPARTMENT OF PUBLIC WORKS AND HIGHWAYS-ILOCOS

LAOAG CITY, Ilocos Norte — The frequent landslides and rockslides along the national highway in Pagudpud town prompted the Department of Public Works and Highways (DPWH) to construct a “rock shed” in the area as a preventive measure.

DPWH district engineer Glenn Miguel on Thursday, Sept. 29, said the rock shed is eyed to prevent road closure on a portion of the national highway, also known as the Manila North Road, during weather disturbances.

Landslides and rockslides pose risks to the safety of motorists traversing the area. The road serves as a gateway to most parts of the Cagayan Valley.

A rock shed is a structure used in mountainous areas where rock and landslides create highway closure problems, according to a landslide handbook of the United States Geological Survey.

At a press briefing on Sept. 27, Ilocos Norte Gov. Matthew Marcos Manotoc said a long-term solution should be sought and implemented immediately due to the increasing occurrence of landslides on the highway.

A series of slides on Sept. 10 blocked a portion of the national highway for almost two weeks. One lane was made passable to motorists on Sept. 22.

As of Sept. 27, the road’s one lane was passable to light vehicles as clearing operations continued, the DPWH said.

A team from the agency is also closely monitoring the area for a recurrence of slides, assisting motorists.

The DPWH is also considering the possibility of building the structure on the highway after a dialogue with the office of Ilocos Norte First District Rep. Ferdinand Alexander Marcos for funding. INQ