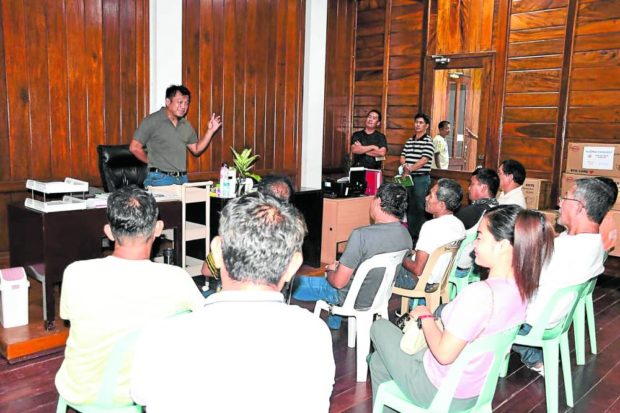 ‘TRUST GOD’ Beleaguered Negros Oriental Gov. Pryde Henry Teves briefs visiting village leaders on Sept. 29 about ongoing projects and the “political stability” in the province, telling them to “trust God because everything will be OK.” —PROVINCIAL GOVERNMENT OF NEGROS ORIENTAL FACEBOOK photo

This was the appeal of lawyer Ferdinand Gujilde, spokesperson for the Commission on Elections (Comelec) in Central Visayas, to the camps of Negros Oriental Gov. Pryde Henry Teves and former Gov. Roel Degamo after the poll body invalidated Teves’ victory in the May 2022 elections.

In its ruling dated Sept. 27, the Comelec en banc annulled the proclamation of Teves after it credited the votes obtained by nuisance candidate Ruel Degamo to defeated gubernatorial candidate Roel Degamo.

A special canvassing board will convene on Oct. 3 at the Comelec’s Palacio del Gobernador Building in Intramuros, Manila, to nullify the election victory of Teves and credit the votes obtained by nuisance candidate Ruel Degamo in favor of Roel Degamo, according to the writ of execution signed by Comelec Chair George Erwin Garcia.

After which, a copy of the “Certificate of Proclamation” shall be furnished to the Department of Interior and Local Government, the provincial government of Negros Oriental and the affected parties.

Gujilde said Teves can appeal the ruling before the Supreme Court.

“But if he (Teves) fails to get a temporary restraining order (TRO) from the High Court, then the Comelec’s ruling shall be implemented. Only a TRO can stop [Roel Degamo] from assuming the post of governor of Negros Oriental,” he told the Inquirer over the phone on Thursday evening.

On Dec. 16, 2021, the Comelec declared Ruel Degamo a nuisance candidate and canceled his certificate of candidacy for governor of Negros Oriental. But since there was no final Comelec en banc ruling by Election Day, his name remained on the official ballot.

Ruel Degamo, through his lawyer, filed a motion for reconsideration to contest the ruling of the Comelec that declared him a nuisance candidate. But last Sept. 1, the Comelec en banc, voting 3-2, denied the appeal filed by Ruel Degamo, whose real name is Grego Gaudia.

The Comelec en banc issued the certificate of finality and entry of judgement in favor of Roel Degamo on Sept. 27 in the absence of a TRO or injustice writ from the Supreme Court.

As of Friday, both Teves and Roel Degamo have yet to issue statements on whether or not they have received the poll body’s ruling.

On June 30, 2022, when winners in the May elections were to officially take their posts, tension rose after at least 100 supporters of Roel Degamo gathered in front of the Negros Oriental capitol here to prevent Teves from assuming his post. Roel Degamo eventually gave in and let Teves assume the post.

Lavisto said a special unit will be deployed at the Capitol and a command center was also being readied in time for Roel Degamo’s assumption as governor.

“But above all, we always hope and pray that the transition of power will be peaceful and there will be no further commotion that will happen. We are ready for any possibilities,” he added. —REPORTS FROM KARLOWE BRIER, ADOR VINCENT MAYOL AND CARLA P. GOMEZ INQ