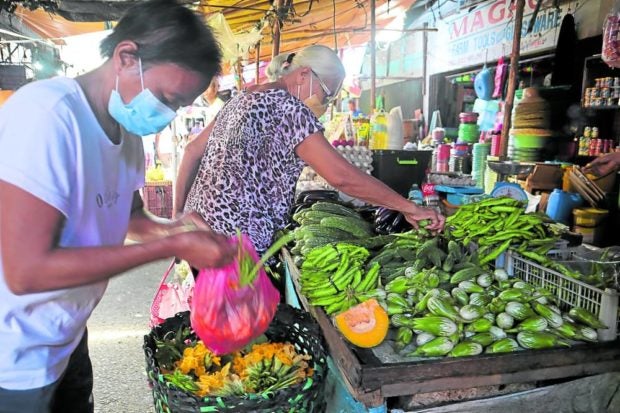 IMPACT Barely a week after Supertyphoon “Karding” (international name: Noru) destroyed farms in some parts of northern Luzon, the prices of several vegetables at a public market in Ilagan City, Isabela province, increased by as much as 100 percent on Friday as suppliers from trading centers in Nueva Vizcaya and Benguet jacked up their wholesale prices due to lack of supply and high transportation costs. —VILLAMOR VISAYA JR.

CITY OF ILAGAN — The low supply of some vegetables and other crops grown in storm-hit Cagayan Valley region has pushed the prices of farm produce by as much as twice its previous cost, bucking a Department of Agriculture (DA) previous projection of price increases of around 20 percent in areas devastated by last week’s Supertyphoon “Karding” (international name: Noru).

Narciso Edillo, executive director of the DA in Cagayan Valley, said most of the damaged farms were in Nueva Vizcaya’s highland areas, which sustained P14.1 million in losses due to ruined high-value crops.

As of Friday, tomatoes were sold in public markets at P120 per kilo, up from P60 a kilo before the onslaught of Karding, according to the price monitoring of the DA. The price of carrots also rose from P100 to P160 a kilo.

The retail price of Baguio beans increased from P80 to P100, while potatoes were now sold at P80 from P60 a kilo. Onions’ prices went up from P160 to P240, while garlic was sold at P120 a kilo, slightly higher than the previous P100 a kilo.

Ricky Maddara, 41, a vegetable trader at Ilagan public market, said their suppliers from the trading centers in Nueva Vizcaya and Benguet have begun selling vegetables at higher prices.

“We’re left with no choice but to increase our retail prices as well to earn a little,” Maddara told the Inquirer.

On Thursday, Agriculture Senior Undersecretary Domingo Panganiban said they were anticipating a spike of 15 to 20 percent in prices of food items, especially rice and vegetables, due to the massive damage left by Karding to the agricultural sector.

During the Laging Handa public briefing, the DA said Karding destroyed at least P2.02 billion worth of agricultural produce, with the rice sector accounting for nearly 82 percent or P1.66 billion of the recorded damage in the farm sector.

But in Nueva Ecija province alone, local officials have already pegged the damage to agriculture at P3.3 billion as of Friday.

According to the provincial disaster risk reduction and management office (PDRRMO), rice fields suffered the brunt of the typhoon.

In Bulacan province, at least three of 49 villages in the town of San Miguel remained flooded as of Friday.

Wilfredo dela Cruz, environmental officer of San Miguel, said nearly 90 percent of the town was submerged in floods at the height of Karding on Sunday.

The massive flooding claimed the lives of five local rescuers who drowned while responding to the flooded areas.

San Miguel was declared under a state of calamity on Tuesday due to the impact of the typhoon on the town. At least 52,180 families, or 190,266 people, were affected by the floods.

In Quezon province, Gov. Angelina Tan appealed to the national government to help the victims of Karding.

“More than 3,000 households in Burdeos town alone badly needed help and all assistance,” Tan said in a video message posted on her Facebook on Thursday.

Tan said she has visited and distributed cash aid and relief packs to the residents of the five municipalities in the Polillo Group of Islands located in northern Quezon facing the Pacific Ocean: Polillo, Burdeos, Panukulan, Jomalig and Patnanungan.

The Polillo Group of Islands was among the worst-hit in the typhoon’s path.

“Several tribal communities were also badly hit by the typhoon,” Astoveza said in a phone interview.

He said the tribesmen needed emergency food packs, medicine and other assistance.

About 12,389 houses in the province were destroyed and damaged by Karding on Sunday, the PDRRMO said in a report. —WITH REPORTS FROM ARMAND GALANG AND CARMELA REYES-ESTROPE INQ