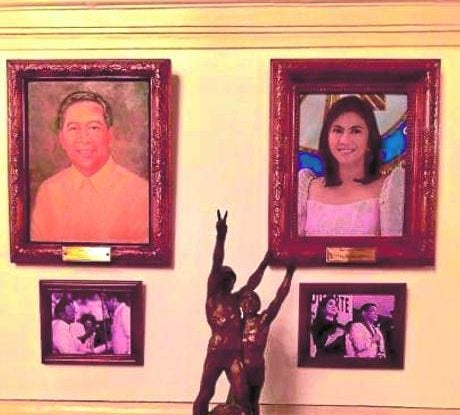 FOR REPLACEMENT A visitor at the Presidential Museum and Library in Malacañang has noticed that former Vice President Leni Robredo’s portrait (right) on display was just a tarpaulin printout, while the others, like Jejomar Binay’s (left), are oil paintings, drawing an outcry on social media. But museum director Ryan Faustino said a donated Robredo oil painting was set to arrive in October. —Stephen Go/contributor

MANILA, Philippines — A portrait of Leni Robredo hangs in the gallery of vice presidents at the Presidential Museum and Library at Malacañang. But on closer inspection, hers is different from the other oil-on-canvas paintings.

It’s just a printout on cheap tarpaulin, not unlike an election or commercial poster one might hang at a house gate or on a street pole.

For an opposition leader often in the crosshairs of the previous Duterte administration, that might seem like just another petty but expected slight.

But no insult was intended, according to the director and head of the museum, Ryan Faustino, who explained that Robredo’s portrait, which has been on display since August, was just a “placeholder” for an oil painting due to arrive next month.

“Let us not make this an issue. It is a nonissue,” he told the Inquirer in a phone interview.

“There is nothing political about the decision. To use a placeholder is just a matter of economy since we will be replacing it with something better,” he insisted.

Faustino revealed that he himself had painted a portrait of Robredo but he was not satisfied with the outcome.

“So I changed it with a tarp. But that is just a placeholder,” he said.

“Actually, that’s her official portrait that was just printed. It would be a waste if we will have an expensive one made and then change it sooner or later,” Faustino added.

On Thursday, a photo of the tarpaulin portrait taken by a visitor to the Palace museum circulated on social media, gaining mixed reactions online.

It even drew calls among Robredo supporters to donate better artworks to the museum, considering its limited funding.

Reached by the Inquirer, the original poster, Stephen Go, confirmed Faustino’s statements, saying an in-house painting did not satisfy the director, prompting him to use the placeholder.

“Anyway the museum’s intention to wait for a better portrait seems genuine, but then due to circumstances, it might not be a priority right now to have a new painting made. So it might be best for someone to donate to the museum,” he said in Filipino.

According to Faustino, someone has already promised to donate an oil painting of Robredo to the museum.

The new portrait should arrive by October, he said.

Faustino said he decided to use the tarp because museum visitors might wonder why Robredo’s portrait was not on the exhibit, leading to the wrong assumption that politics was at play.

Robredo, the former chair of the Liberal Party, lost the May elections to President Marcos but remains a prominent figure in the political opposition.

Faustino replied: “Is it? I don’t think so.”

“Let us not play this up. This is a nonissue,” he repeated.

“Absolutely not. If it’s good enough for an ad, it’s good enough to display, considering a photo printout would suffice,” Quezon said in a message to the Inquirer. “Besides which the director of the museum is a civil servant so has no need to lie to the press.”

“At most one should be aware that the Office of the President (OP) under the previous administration wouldn’t logically have been expected to spend a centavo for a portrait of an official it considered a political enemy, and the museum is absolutely bound by whatever funds the OP decides to spend,” Quezon said.

In any case, Robredo has her own museum now, featuring a myriad of her portraits, memorabilia, artworks and souvenirs from her presidential run and the “pink movement” started by her believers.

On Sept. 20, the former vice president officially opened the Museo ng Pag-asa (Museum of Hope) to the public.

Located at 84 Cordillera, Sta. Mesa Heights in Quezon City, the museum houses gifts and tokens received from Robredo supporters during the campaign.

Because the campaign received an overwhelming number of materials, parts of the museum will feature rotating exhibits to accommodate other pieces.

On the museum walls are murals of Robredo and her campaign made by artist AG Saño, cartoonist Kevin Eric Raymundo, known as Tarantadong Kalbo, graphic artist Robert Alejandro and sculptor Toym Leon Imao.

A souvenir shop sells merchandise and tokens made by local and independent stores. A portion of the proceeds goes to Robredo’s Angat Buhay Foundation.

In spite of her loss, Robredo said she looks at the museum as a reminder of the pursuit of ideals represented by the pink movement, which has taken a life of its own beyond the elections.

“That is why it’s called Museo ng Pag-asa, because of the hope it brings that we may all become part of building a better nation,” she said. —WITH A REPORT FROM ABBY BOISER