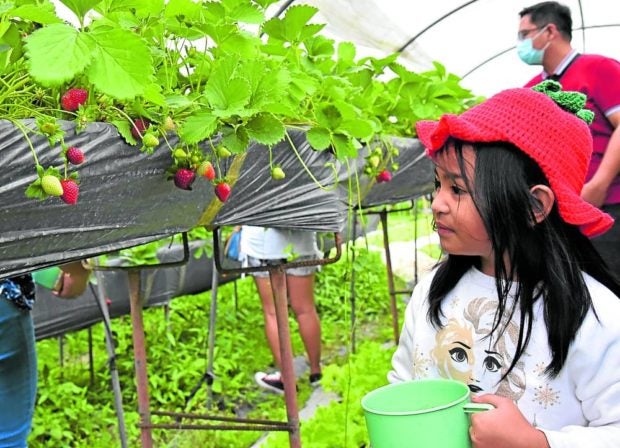 BERRY PICKING | A girl, accompanied by her parents, visits the strawberry farm in La Trinidad, Benguet, to pick fresh berries in this photo taken in May. Areas around the strawberry farm, the top tourist attraction of La Trinidad, are being offered to investors as the Benguet State University looks for additional sources of funds to sustain operations. (Photo by EV ESPIRITU / Inquirer Northern Luzon)

LA TRINIDAD, Benguet, Philippines — The prime real estate owned by this province’s state university is being developed for investors, part of an initiative to tap other sources of revenue amid dwindling national subsidies and external problems like rising inflation.

According to Benguet State University (BSU) president Felipe Comila, the school’s 1-hectare strawberry farm, which is the most popular tourist destination in this capital town, is part of the 605-ha land grant of BSU that has been opened to investors.

A shopping mall chain has approached BSU about leasing 2 ha of the property there, “but we could not give it what it wanted,” Comila said at a recent briefing.

He said a restaurant operating in Baguio City had also pitched a business proposal for the idle area.

“Being enterprising is a need of the hour. We have to be enterprising and display innovativeness [with our] many idle lands,” Comila said.

Located in a 40-ha swampy area, the strawberry farm’s surrounding area may host restaurants, small hotels and a heart-shaped walkway for tourists who can stroll around its 400-meter perimeter for a fee, said Dr. Johnny Gusman Dati Jr., BSU vice president for research.

BSU and other state universities and colleges (SUCs) may get a lower allocation in 2023 after the Department of Budget Management (DBM) pushed for a P93-billion SUC appropriation, or a reduction of about P10 billion when compared to the sector’s P104-billion budget this year.

BSU may get over P800 million in next year’s budget, which is a slight increase from this year’s P792 million, according to the DBM’s draft 2023 national expenditure program.

In the past few years, BSU was forced to tap its revenues to cover school maintenance and operating expenses, as well as the upkeep of its facilities, Comila said.

According to him, the national subsidy is no longer sufficient for its main campus and extension campuses in the Benguet towns of Buguias and Kabayan.

Originally a farm school that was put up 106 years ago, BSU is aiming to advance to a level 5 category university like the University of the Philippines, Comila said.

In aspiring for “that ranking and that level of confidence,” BSU may be able to access much bigger funds, given its ambitions of establishing a medical college, as well as a National College of Highland Agriculture and Environment, he added.

“I intend to open [idle BSU lands] to the public if I don’t get money from the government to finance that. The public can invest,” Comila said.

CHEd flagged for failed IT development plan for SUCs