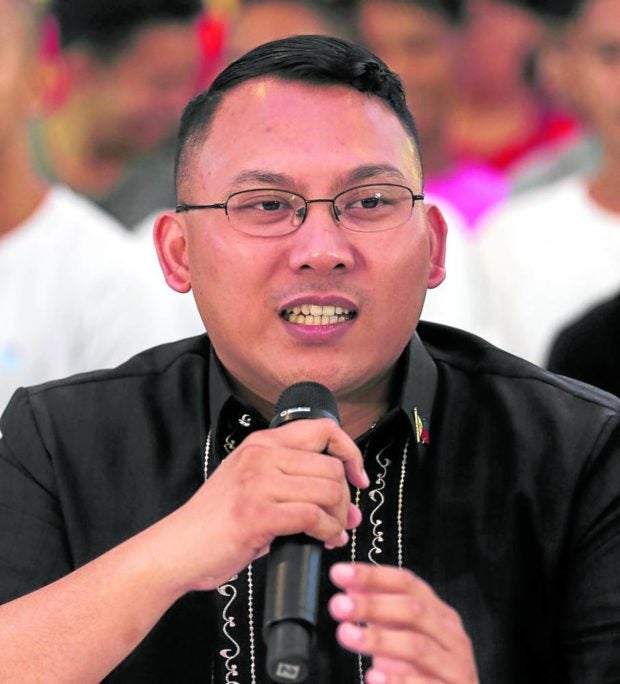 MANILA, Philippines — Kabataan Rep. Raoul Manuel has moved to defer the budget of the National Youth Commission (NYC) if its incumbent chairperson, Ronald Cardema, would not resign from his post.

Manuel, during the House of Representatives’ plenary debates on the proposed Department of the Interior and Local Government (DILG) budget on Tuesday, called on Cardema to leave his office, or government officials appoint another NYC head because of alleged mismanagement and massive corruption within the agency.

According to the lawmaker, there have been numerous issues hurled at NYC — from audit reports stating unnecessary expenses and too much snacks, lost prepaid cards, and other claims of resource wastage — but the NYC management has supposedly not addressed these problems.

(Deliberations for the budget of the National Youth Commission would be meaningless as long as this kind of leadership is present.  We call for the resignation of the NYC Chairperson Ronald Cardema, if he does not resign because he clings to power, then he should be replaced.)

“Iba na ang iaappoint ng DILG at hanggang siya po yung nandyan sa NYC [Another official should be appointed by DILG and as long as he is there in NYC] we move to defer the deliberations on the 2023 proposed budget of the National Youth Commission that rigs of corruption and is not reflective of youth leadership in this country,” he added.

READ: Too much snacking in youth agency

In response, Leyte 5th District Rep. Carl Cari who was then sponsoring the DILG budget said that while they take note of Manuel’s query and suggestions, the department has no authority to appoint a new NYC chair as the power rests upon the President.

“Mr. Chair I sincerely take note of your query, I humbly provide the following responses to that query Mr. Speaker,” Cari said.

After Manuel’s motion was left hanging, Minority Floor Leader and 4Ps Rep. Marcelino Libanan asked the Speaker what would be the next recourse, to which deputy majority leader and Iloilo 3rd District Rep. Lorenz Defensor replied by asking the sponsor and the House committee on appropriations to exercise the oversight function on NYC.

This was to ensure that the House would no longer need to be divided to decide whether Manuel’s motion would be adopted — giving lawmakers time to continue the budget deliberations within its schedule and debate on the proposed budgets of other offices.

“Considering the minority leader has pointed out a pending motion, Mr. Speaker, the response of the sponsor and as well as the explanation as well as the interpellation of the Honorable Manuel, I hopefully has enlightened the Sponsor […] can I get the commitment from the sponsor as well as the Committee of Appropriations to exercise its oversight over the funds of NYC so that we no longer need to divide the House and have a divisive motion at this stage of the deliberations?” Defensor asked, which the sponsor and the committee agreed to.

“Mr. Speaker, May I request — we recognize the Minority Leader if the Honorable Manuel can withdraw the motion so we can proceed with the deliberations for the Department of Energy, as well as the Department of Transportation,” he added.

Session was suspended afterwards, but upon resumption, Libanan agreed to lay Manuel’s motion on the table for future consideration so that debates on the DILG budget can be concluded.

This is not the first time that Kabataan party-list — a member of the Makabayan bloc — locked horns with Cardema, a staunch critic of leftist and progressive groups.  In 2019, Cardema blasted critics of his decision to be nominated as a substitute candidate of the Duterte Youth party-list, noting that Filipinos no longer want lawmakers allied with the New People’s Army.

Cardema was referring to Kabataan, which got fewer votes than Duterte Youth.  However, Kabataan still landed a seat in the 18th Congress. With reports from Alyssa Joy Quevedo, INQUIRER.net trainee

Read Next
Negros Occidental-based NGO to receive award from Ateneo for public service
EDITORS' PICK
House energy committee chair Arroyo bats for cheap electricity
Shop smarter with vivo’s big 12.12 holiday deals
The vivo Y02 is now available in the Philippines for only PHP 5,299
Hidilyn Diaz wins only gold missing from her collection
How not to retire as an ex-president
Lawmakers eyeing more changes in Maharlika plan
MOST READ
Jovit Baldivino, ‘Pilipinas Got Talent’ winner, dies at 29
Andi Eigenmann, family in Manila for a quick visit; Ellie dines with grandma Jaclyn Jose
LPA enters PAR, to likely strengthen into tropical depression in coming days – Pagasa
Lawmakers eyeing more changes in Maharlika plan
Don't miss out on the latest news and information.