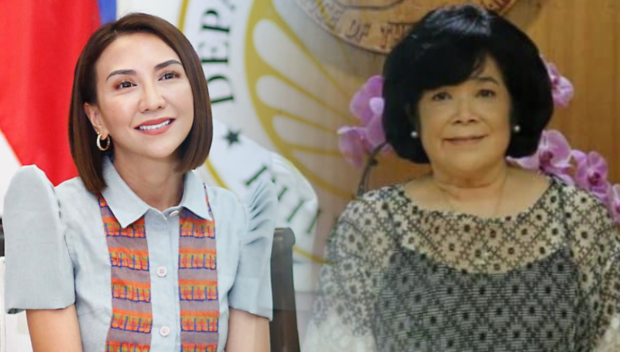 UPDATED MANILA, Philippines – The Environment and Tourism secretaries appointed by President Ferdinand “Bongbong” Marcos Jr. have earned the approval of the Commission on Appointments (CA).

In the CA plenary session on Tuesday, Antonia Yulo Loyzaga and Christina Frasco clinched their posts as the heads of the Department of Environment and Natural Resources and the Department of Tourism, respectively.

Facing the committee on environment and natural resources who deliberated and later certified her designation, Loyzaga was asked about controversial issues hounding the DENR, including the Kaliwa Dam project and the Masungi Georeserve.

While she admitted that she has yet to thoroughly read about the situation on the Kaliwa Dam project, Loyzaga said: “This issue of water supply for domestic use is one that continues and continues to grow, and so without alternatives, we must do a very accurate cost-benefit analysis, but include the economic, social and environmental concerns that might arise from the implementation of this project.”

Loyzaga noted, however, that what she has read so far has “raised concern,” and this is an area she hopes to look further into in the future.

The Kaliwa Dam – a big-ticket item under the former administration’s “Build Build Build” program – is intended to supply 600 million liters of water to Metro Manila and nearby areas that are currently dependent on the Angat and Ipo dams.

But its construction will affect around 1,465 families as it will displace many communities in the provinces of Quezon and Rizal.

On top of this, it is also seen to damage a portion of the Sierra Madre mountain range, which has historically helped reduce the strength of several typhoons and protected millions of Filipinos from a far worse calamity.

READ: A tribe under threat: Dumagat vs dams

Masungi and its ‘long history’
Loyzaga, meanwhile, said she believes the memorandum of agreement (MOA) signed by the DENR and the Masungi Georeserve Foundation in 2017 “was not able to appreciate the history of the claims and rites there.”

“However, having said that, we wish to acknowledge the great work done by civil society groups especially the Masungi Foundation in terms of preserving and conserving the area under which they have control at the moment,” she added.

Loyzaga also bared that the DENR has since been in close coordination with the Department of Interior and Local Government, and they hope to similarly involve the Department of Justice in “trying to resolve the competing interests and claims.”

The said MOA grants the Masungi Georeserve Foundation full control in conservation efforts on the protected area in the Upper Marikina River.

But according to Loyzaga, “it will need to be revised if [they] were to find some way of compromising in terms of settlement of this issue.”

“The position for the department at this point would be to sit down with all parties, and to try and resolve the competing interests that have been expressed by the different instruments that are currently in place,” she further explained.

Evolving from ‘It’s more fun in the PH’?
Frasco, on the other hand, spoke before the CA committee on tourism and economic development, who ultimately accepted and recommended her appointment to the plenary.

Frasco said this decision stemmed from a discussion with Marcos, in consideration of what the country and the world have been through since the pandemic.

“[It] is the general notion that, perhaps, it is time to revisit the branding campaign of the Philippines, to study how it may evolve and reflect the best qualities of the Philippines and the Filipino people,” she explained.

Frasco then assured the panel that the process of “evolving” the tagline would be “as consultative as possible.”

Hearing this, Senator Nancy Binay expressed her hopes that Frasco would reconsider this plan.

“This is one of the complaints we’ve been receiving. Our potential market abroad gets confused, because we keep changing our slogan. We’re probably the only country that changes our slogan every six years, and with your limited budget, we should also consider the cost,” she said in a mix of English and Filipino — with reports from Catherine Dabu, INQUIRER.net trainee