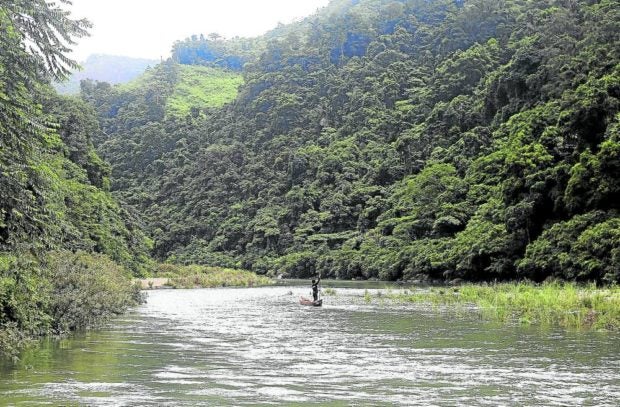 ANCESTRAL ABODE Members of the Dumagat indigenous peoples group, like this tribesman sailing on a raft in Kaliwa-Kaliwa River in Infanta, Quezon province, consider Sierra Madre as their ancestral home. —RICHARD A. REYES

Sierra Madre, the country’s longest mountain range located in the eastern corridor of Luzon island, became a trending topic on Twitter during the onslaught of Supertyphoon “Karding” (international name: Noru) as netizens called attention to how it protected Metro Manila and several provinces from calamities.

Netizens reminded their followers of its important role as an effective barrier against storms coming from the Pacific Ocean before heading for Luzon. The topic had 78,500 tweets as of Monday morning.

The mountains reduced the strength of Karding and shielded millions of residents in the typhoon’s path from a far worse catastrophe.

“It was one of the factors that weakened the typhoon because a storm weakens after a land interaction. Sierra Madre is a rugged terrain so Karding naturally lost some strength,” weather specialist Vanessa Torres told the Inquirer.

Some netizens urged the public to sign online petitions to stop the P12.2-billion China-funded Kaliwa Dam project, seen as a threat to Sierra Madre’s biodiversity and strongly opposed by indigenous peoples and environmental advocates.

Old content about Sierra Madre such as artworks and educational videos also resurfaced online to point out its importance.

The renewed public interest in the mountain range coincided with “Save Sierra Madre Day,” which is observed every Sept. 26 pursuant to Presidential Proclamation No. 413 in 2012 signed by then President Benigno Aquino III.

Sierra Madre’s rich resources have been under heavy threat over the years due to illegal logging operations, mining and development projects, affecting the corridor’s ecosystem and its capability to effectively shield mainland Luzon from approaching typhoons.

Environmental activist group Kalikasan People’s Network for the Environment (KPNE) took the opportunity to object to the Kaliwa Dam project and the attacks on Masungi Georeserve, a 400-hectare protected land situated in the southern Sierra Madre range in Rizal province.

“The government must work on measures to address climate change in the long-term such as building appropriate infrastructure and rehabilitation and conservation of natural barriers such as the Sierra Madre,” KPNE national coordinator Jon Bonifacio told the Inquirer.

“The Sierra Madre has once again shown just how crucial it is in protecting us against extreme weather events,” Rizal Rep. Juan Fidel Felipe Nograles said on Monday, as he renewed his push for the immediate passage of House Bill No. 1972, which would create a Sierra Madre Development Authority (SMDA).“Many are saying ‘we got lucky’ and [were] spared the worst of the disaster brought by Karding. But we cannot just rely on luck when it comes to our welfare. We must act and must act now,” he said in a statement on Monday.

“The SMDA will be a massive help in unifying our efforts,” adding that the SMDA would “help us preserve this shield (Sierra Madre) in the face of a worsening climate crisis,” Nograles pointed out.

In his explanatory note on HB 1972, Nograles said the Sierra Madre spans some 500 kilometers from Cagayan province to Quezon and is made up of 1.4 million hectares across 10 provinces, comprising 40 percent of the country’s remaining forest cover. The mountain range’s highest peak is 6,069 feet.

According to Nograles, “in 2018, the Sierra Madre had stifled what could have been the world’s strongest storm. The massive wall of the Sierra Madre ranges protected and averted the impacts of devastation to the country of Typhoon ‘Ompong’ (Mangkhut) in September 2018.”

He pointed out that Ompong’s winds slowed down from 220 km per hour (kph) to 160 kph after battering the Sierra Madre.

The Rizal lawmaker noted that the Sierra Madre also reduced the strength of Supertyphoon “Lawin” (Haima) and Typhoon “Karen” (Sarika) from Category 5 to Category 3 cyclone.

Nograles said that apart from being a natural barrier, the Sierra Madre was an important center of biodiversity being home to 201 species of mammals, 556 species of birds, over 85 species of amphibians, and 252 species of reptiles as well as various flora.

The mountain range is also home and sacred ground to 11 indigenous peoples groups.

But Nograles said that human activities, including illegal logging, timber poaching, illegal mining, and conversion of forest for agriculture, threatened the mountain range.

“By and large, the lack of implementation of environmental protection laws vis-a-vis the lack of regulation for human activities in the area, contribute to the continued forest degradation and dissipation of natural resources,” he said. INQ