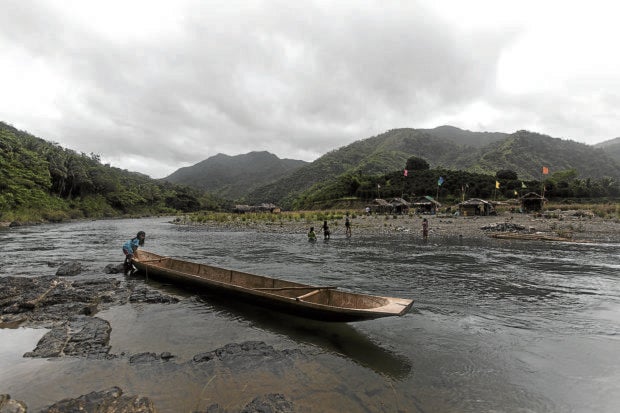 Residents of Sitio Paydas have to cross the Agos river using a small boat due to the river’s regular overflow.
Photo by Kathleen Lei Limayo

The Dumagat-Remontado, an indigenous people who have settled in Tanay, Rizal province, thought they had seen the worst until Typhoon “Ulysses” struck in November last year. Most of their homes were on elevated terrain, but trees felled by the storm and other debris washed down the slopes ended up clogging the Daraitan river, raising the water level and flooding the nearest houses.

“We were praying for the rain to stop,” Imelda Bandilla, 35, said as she recalled how she and her neighbors were caught by surprise by the neck-deep flood. They literally had to climb trees to survive. 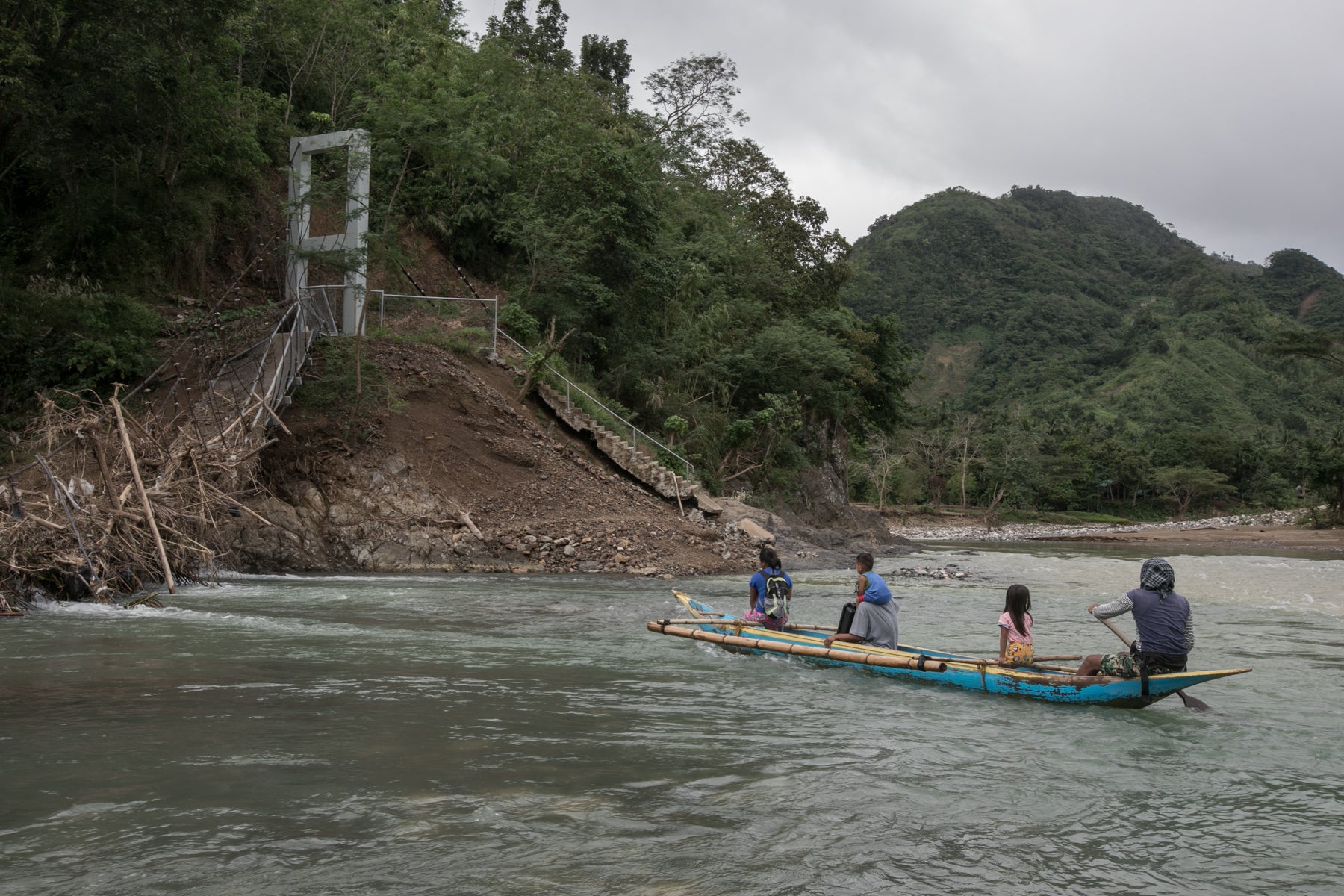 Dumagat-Remontados cross the Agos River via boat after the bridge connecting Sitio Manggahan and Magata broke off during Typhoon Ulysses. The typhoon, they said, was the most powerful storm to hit their community, displacing many of them and uprooting their livelihoods. Photos by Kathleen Limayo

The Bandillas lost their pets, livestock and produce, but managed to save something that they knew would be crucial if they were to recover quickly from the calamity — their 140-watt solar panel and power generator.

For clean energy advocates and climate crisis watchers, the Dumagat tribe is an example of how a poor, off-grid community highly vulnerable to the effects of global warming has found a lifeline in one of the technological solutions being offered to slow it down.

But the tribe has also gained their attention nowadays because of another threat they face:

Largely isolated on the Sierra Madre, the Dumagat live off the tilled land and the forest, their rustic environs allowing little buffer from natural disasters. Waterfalls draining into the Tanay River irrigate their fields, but also causes heavy flooding during the typhoon season, according to Commissioner Rachel Herrera of the Climate Change Commission.

Changing weather patterns due to climate change increasingly “make it harder for the Dumagat to rebuild their communities,” Herrera added.

Recounting Ulysses, Margie Amuin, 32, a public school teacher, said she had “never seen our house submerged in the flood like that before. It left us so traumatized that, to this day, even a little rain can make us anxious.”

She likened the unpredictable seasons to a person who had gone senile: “Ulyanin na ang panahon.”

Amuin blames destructive practices like deforestation for these life-disrupting changes, with the denuded mountains no longer able to substantially absorb rainwater and sediment runoffs, and leaving more areas prone to landslides. Reduced forest cover also means the loss of carbon sinks, or natural environments that can absorb carbon dioxide and help slow the pace of global warming.

Amuin’s worries are backed by science: A 2020 research by scientists from the University of the Philippines (UP) found that Sierra Madre, the country’s longest mountain range, experienced significant declines in closed forest covers from 2017 to 2019 despite government tree-planting efforts.

Citing satellite images, the UP study noted that since the National Greening Program was launched in 2011, “the state of the forest cover, at least in the greater Luzon region, does not show significant improvement on a large as well as regional scale.”

Not one but two

The calamity that befell the Dumagat community last year caught the attention of environmental groups like the Institute for Climate and Sustainable Cities (ICSC) and 350.org. These groups initially helped the tribe rebuild their lives by donating solar panels and generators for communal use, augmenting those earlier bought by individual households.

In the course of its immersion in the community, 350.org expanded its involvement by joining the conversation about another, more existential threat to the Dumagat way of life.

Chuck Baclagon, 350.org’s digital campaigner in Asia, said the Dumagat communities are located in a highly deforested valley without permanent structures that would protect them from extreme weather events.

And the situation, Baclagon said, is exacerbated by the pending “mega-infrastructure” projects that threaten to flood their community.

Within the last decade, the Dumagat have protested against not one but two major dam projects planned within the Kaliwa Watershed Forest Reserve, a conservation site in the Sierra Madre Biodiversity Corridor. Under the ancestral domain clause of the Indigeneous Peoples Rights Act of 1997, the corridor is placed in the tribe’s care.

The tribe had fiercely opposed — and successfully blocked — the first one during the Benigno Aquino administration: the Laiban Dam project of the Metropolitan Waterworks and Sewerage System (MWSS).

Under the Duterte administation, they are again up in arms, this time against the P12.2-billion, Chinese-funded Kaliwa Dam, one of the big-ticket items under the “Build Build Build” program. Kaliwa is intended to supply 600 million liters of water to Metro Manila and nearby areas that currently depend on the Angat and Ipo dams.

In its website, the MWSS has identified areas in four municipalities that will be directly affected by the construction: Tanay and Teresa in Rizal and General Nakar and Infanta in Quezon.

In Tanay, the MWSS said, “fringes of reservoir area (will) occupy a portion of Tinipak (cave and river)” in Daraitan village.

The construction will affect about 1,465 families, according to an executive summary on the project prepared by the DENR’s Environmental Management Bureau.

As with Laiban, the Dumagat are opposed to the Kaliwa Dam because it encroaches on their ancestral domain, said Octavio Pranada, one of the tribal leaders.

Under the law, the government can only start infrastructure projects on ancestral lands if it has secured a certificate of free, prior and informed consent (FPIC) from the title-holders.

But despite opposition from tribal communities and environmental advocates, the project received an environmental clearance certificate (ECC) in 2019 from the Department of Environment and Natural Resources (DENR).

“Unfortunately for this project, securing the FPIC is a post-ECC condition,” said Nestor Castro, an anthropologist designated by the DENR to lead a study assessing the ”social impact” of the proposed dam.

Castro decided not to endorse the project because, in his evaluation, the MWSS “failed to secure the social acceptance of the people.”

Curiously, Castro said he was not even allowed to go and see the future project site as he was told by the MWSS about the presence of communist rebels.

His final assessment thus relied heavily on petition letters from members of the Dumagat-Remontado tribe, who mostly anchored their objection in matters physical and spiritual. They said the dam would destroy not only the local biodiversity but also their sacred sites.

Among these sacred areas is the Tinipak Cave and Tinipak River, where they set up animist shrines and hold rituals imploring nature spirits for protection.

As a compromise, the MWSS said it could erect “minidams” to divert water flow and leave the sacred sites untouched. 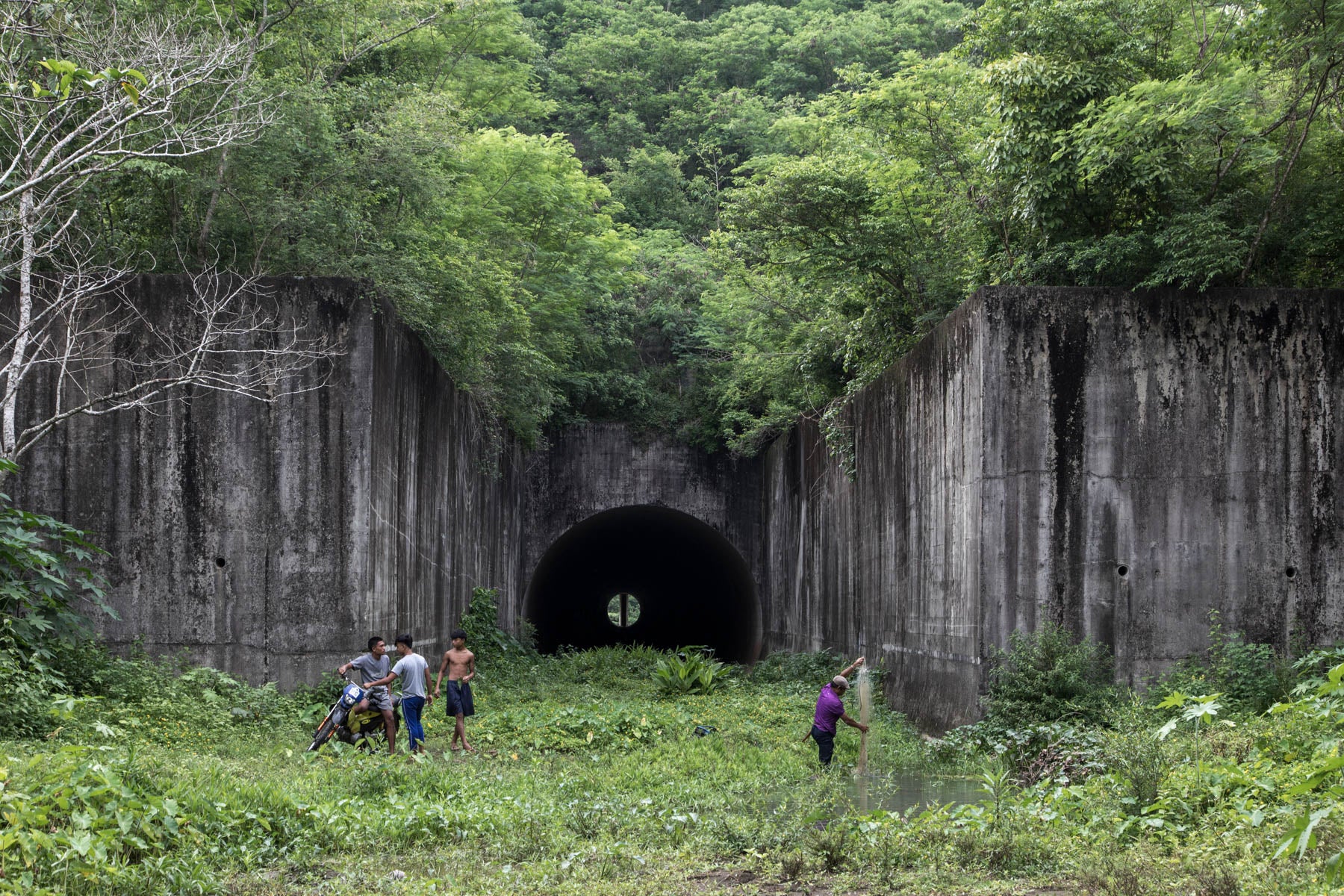 Nature reclaims the concrete tunnel of the Laiban Dam infrastructure which was abandoned when the project got halted.
Photo by Kathleen Lei Limayo

But ultimately, the Dumagat are afraid that their lands “would be taken away” and they “won’t have anything left to pass on to [their] descendants,” Pranada said.

And they are not alone in their worries.

The conservationist group Haribon estimated that at least 126 animal species harbored by the Sierra Madre, including the critically endangered Philippine Eagle (they can be found not only in Mindanao), Philippine warty pig and Philippine brown deer will lose part of their natural habitat that currently extends to the Kaliwa watershed.

At least 300 hectares of forested area will be permanently flooded, Haribon added in a study released in June 2019.

The Commission on Human Rights had also weighed in and acknowledged the Dumagat’s “valid dissent.”

The CHR, in a November 2019 statement, agreed that ”the Kaliwa Dam Project would lead to the destruction of their ancestral domains and displacement of their populations” and that they “have the right to full disclosure of information about the project and the right to negotiate and manifest objection.”

Related story: Why the ECC process for Kaliwa Dam had been faulty, according to an anthropologist

“I couldn’t blame people who are very pessimistic with government projects [because] they have experienced several projects… that they have not benefited from, at least in a sustainable manner,” Castro said. “The bottomline here is people’s consent, because ultimately they will be the ones affected and as always been the case in many hydropower projects in the Philippines, people in the project site are asked to sacrifice.”

When the groundbreaking program for the Kaliwa Dam project was held in Rizal province on June 29, a news item about the event released by the Chinese state media agency Xinhua was headlined: “Water outage in Metro Manila expected to end as Philippines-China dam project breaks ground.”

This may be music to many urban ears but not to Pranada’s. “Even if I am the only one left standing, I will oppose the project. Our forefathers bequeathed this land to us. I will not let it become water,” he said.

Editor’s note: This story is supported under the Climate Change Reporting Fellowship Programme by the Asian Center for Journalism and Internews’ Earth Journalism Network.