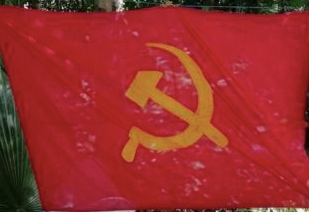 FILE PHOTO: A flag bearing the logo of the CPP-NPA. Photo from the Philippine Army

According to the PNP, the alleged members surrendered to the National Capital Region Police Office on Wednesday morning, the 50th anniversary of the martial law declaration.

“Tulong-tulong tayo para sa pangmatagalang kapayapaan (Let us help one another to achieve long-lasting peace)… This is a major milestone in our quest to end violence amidst our anti-insurgency campaign,” PNP Chief Gen. Rodolfo Azurin Jr. said in a statement.

“Now that they have denounced lawlessness and brought themselves into the light of peace, we now call on other rebels to follow suit and start building a better future for the nation,” Azurin went on.

In addition to raising the white flag, the alleged rebels laid down weapons as a show of their commitment to advancing enduring peace, the PNP noted.