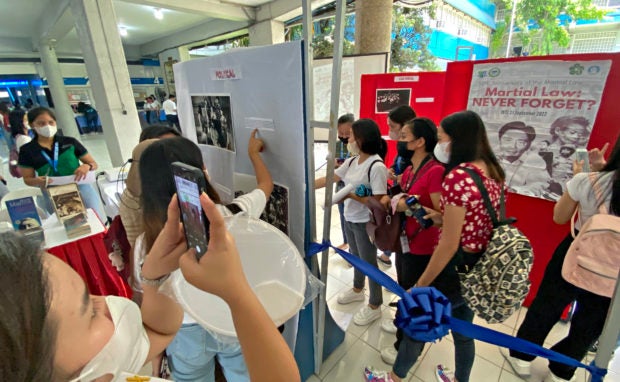 BUTUAN CITY – Student organizations and teachers of Father Saturnino Urios University (FSUU) in tnis city commemorated the 50th anniversary of martial law declaration in 1972 by organizing a film showing with a photo exhibit that aims to remember the realities the nation faced and experienced during those tumultuous times.

The event was participated by the Social Sciences Division, the Political Science and Economics Society, and history students.

“We, the Social Sciences Division, have been aware that there are attempts to change the historical narratives. Case in point, this Marcos Martial Law event in the past. This historical revisionism or denialism, as Prof. Ambeth Ocampo points out, has been making the rounds in all media channels. We want to help our students discern the disinformation, so we have to empower them by presenting the past events as they really happened, using primary and secondary historical sources,” said Rochelle A. Valencia, instructor in Philippine History.

In a statement, the Social Sciences Division pointed out that the exhibit is a good occasion to remind the Urian community that they have to be constantly vigilant as there are groups of people who want to distort the facts.

“Remembering the abuses of martial law is to ensure that we do not forget the lives lost and wasted. 50 years have passed, yet some of the perpetrators have not been called to account for their abuses. This part of our history is painful, but it should not be committed to oblivion. We will not forget until justice is served and the surviving victims are compensated,” added Valencia.

Sirad B. Mamalampac, a first-year nursing student, said the event was a big help in informing her and her peers about what really happened in the past.

“This is a good way for us (to learn), especially the young ones, because we tend to forget the past or what happened in the Philippines during the dictatorship and the martial law era. I felt like it’s a good way to help enlighten individuals because there are a lot of teenagers who don’t know what really happened, either they do not understand it, or they choose not to understand, which is really sad,” said Mamalampac.

Mamalampac added that although touted as the hope of the nation, the younger generation usually falls to disinformation and forgets the injustices of the past.

“Because of historical revisionism, instead of learning from our past, we are repeating the same mistakes, adding to the pain and injury of those who already suffered the injustices,” he said.

Liana Nicole A. Maestrado, vice president for internal affairs of the Political Science and Economics Society, said the event was meant to remind Urian students of the horrors of the martial law years.

Maestrado recalled that a 2022 poll among FSUU students showed that many did not believe in the atrocities committed during martial law.

Throughout the event, books that chronicled the martial law era and how people fought the Marcos dictatorship were on display, courtesy of the Urios and Nogochi libraries. 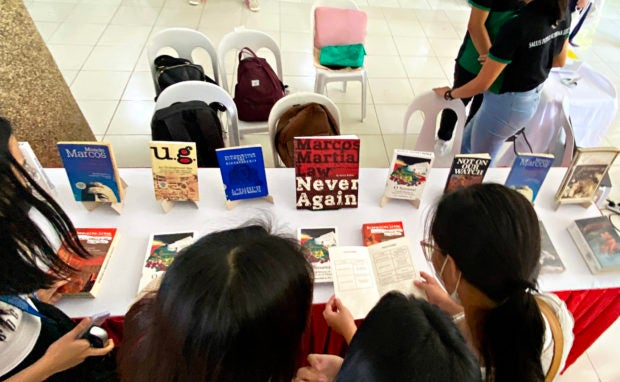