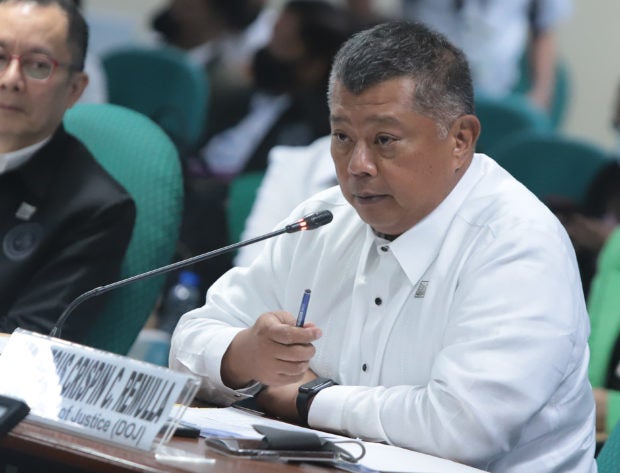 MANILA, Philippines — Illegal Philippine offshore gaming operator (POGO) workers will be summarily deported, Justice Secretary Jesus Crispin Remulla said on Wednesday, pointing out that it was the “logical” move for the government.

“Based on our procedures now, the filing of cases is not compatible with deportation. If you file a case, then we cannot deport them because they have to be under the process of the law,” he said in a radio interview.

“So we have a choice. Either to file cases or to summarily deport them. The logical thing is for summary deportation to take place because we don’t want to be keeping 20,000 people in a makeshift jail,” Remulla said.

“Summary deportation is the only option. We will deport them for overstaying,” Remulla told the Inquirer.

The justice secretary, during the Senate hearing for the annual budget of the Department of Justice (DOJ) on Tuesday, said that there were 216 illegal POGOs whose permits to operate had already been canceled by the state regulator Philippine Amusement and Gaming Corp. He estimated that around 40,000 employees might be staying in the Philippines illegally.

According to Remulla, the Philippines is now ready to deport around 280 illegal POGO employees in their custody.

“We are scheduled to catch more people … We don’t want to arrest them simultaneously because this can result in a humanitarian crisis if we can’t deport them immediately. So we want to calibrate all the movement so it would be logical … like the schedule of [flights],” he said.

Remulla, in a message to reporters, said he was meeting with the Chinese Embassy charge d’affaires today (Thursday) but was exchanging texts with Chinese Ambassador Huang Xilian, who is currently in China.

In a separate message to reporters, DOJ spokesperson lawyer Mico Clavano said that Remulla was meeting with Chinese officials to discuss coordination efforts between Manila and Beijing to bring back to China workers in the industry who were either undocumented, overstaying, or with an expired visa.

The Chinese Embassy in Manila welcomed the Philippines’ move to take strong measures to crack down on crimes related to POGOs “and tackle its root cause so as to address the social ills in a sweeping manner.”

“It is reported that most of the recent crimes targeted at Chinese citizens in the Philippines are related to POGOs. It is appreciated that relevant Philippine law enforcement agencies rescued a number of Chinese citizens and shut down some POGO companies during their recent operations,” the embassy, quoting Huang, said in a statement on Wednesday.

Citing Chinese laws and regulations, he pointed out that gambling in whatever form by Chinese citizens, be it online or overseas, was illegal.

“Crimes induced by and associated with online gambling not only harm China’s interests and China-Philippines relations but also hurt the interests of the Philippines,” the statement added.

The embassy also vowed to continue to strengthen communication and cooperation with the Philippine government and law enforcement agencies, adding that it would handle deportation, among other issues, in a constructive manner.

“The Chinese side stands ready to step up law enforcement cooperation with the Philippine side,” it added.

According to the embassy, Remulla assured China that the government would continue the crackdown on illegal activities and that the justice secretary sought the embassy’s help on deportation, among other issues.

In Congress, a lawmaker warned that a total ban on Pogos in the wake of recent kidnappings and illegal activities involving Chinese nationals might be harmful to the country’s economy.

House ways and means committee chair Rep. Joey Salceda, an economist, likened it to burning down a house “just to kill the rat inside.”

In a statement, Salceda said “a blanket ban on a specific sector, when there are laws that already exist to prevent abuses in any kind of business, will be seen as arbitrary.”

“My stand is for the government to wield the full weight of the law against illegal gaming operations. But our policy cannot be to give an entire industry up just because there are bad actors. All industries have bad actors,” he said.

Salceda suggested keeping Pogos within “Pogo-specific zones that are ring-fenced from the rest of the country.”

Read Next
LTO to press drive vs drunk, drugged driving
EDITORS' PICK
Bongbong Marcos says PH ‘open for business’ with new Clark Airport terminal
Individuals affected by ‘Karding’ now over 157,000
Newbie gamers are in for a treat with the power-packed feature of vivo Y16
Karding damage to infrastructure at P23M
House energy committee chair Arroyo bats for cheap electricity
Reignite your passion with the vivo Y35
MOST READ
Angelica Panganiban ‘duguan, sugatang mom’ one week into breastfeeding
LPA enters PAR, may develop into tropical depression
Badoy not with Office of the President, NTF-Elcac, under Marcos admin — solon
Charges readied vs gov’t guard with P290-M deposits
Don't miss out on the latest news and information.