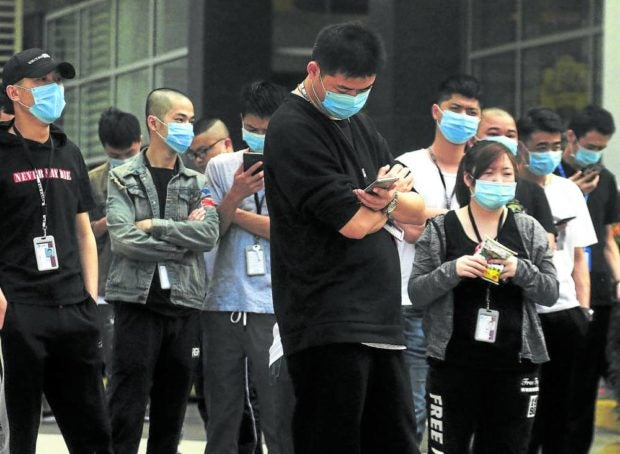 MANILA, Philippines — Senate President Juan Miguel Zubiri on Monday indicated that he would support a move by other senators to ban Philippine offshore gaming operators (POGOs) following reports of serious crimes, including killings and abductions, that had victimized POGO workers from China.

Zubiri said he was having doubts about whether the small revenue from the POGOs was worth it.

“On a personal note, we must weigh the social costs of POGO vis-a-vis the meager income they give to the national coffers of only P3 billion a year. Plus, they do not employ Filipinos, so there is no added benefit to our local labor force,” he said.

Philippine National Police chief Gen. Rodolfo Azurin Jr. also on Monday said he had proposed several “safety nets” to deal with the spike in the number of crimes linked to the industry to Sen. Ronald “Bato” dela Rosa, a former national police chief and the Senate public order and dangerous drugs committee chair.

On Sept. 15, Dela Rosa’s committee opened an investigation of the reported kidnappings and killings of POGO workers.

Zubiri said that senators would wait for the report of the committee before deciding on the proposal to ban these Chinese-run online casinos.

“So, the question is: Is it worth it? That will be tackled during the presentation of the committee report of Senator Dela Rosa,” Zubiri said.

Senate Minority Leader Aquilino Pimentel III has already made up his mind to ban POGOs, saying that allowing them to continue was “dangerous.”

“That is akin to harboring would-be criminals and gangsters that can eventually cause massive disruption of peace and order in the country as we are beginning to see now with the spate of kidnapping incidents and other violent activities related to POGOs,” he said.

He called on Malacañang to heed calls for a total ban on POGOs as undesirable foreigners were turning the country into a “playground for crimes.”

Sen. Imee Marcos, who also is against POGO operations, last week said she brought up the matter with her brother, President Ferdinand Marcos Jr., but he has not yet decided on whether POGOs should be kicked out of the country.

She said she was initially in favor of POGOs because the country was making money from them.

“That was then. But now, just like the ‘e-sabong,’ its okay as a source of income but it is not commensurate to what we are paying for in terms of the crimes — kidnappings and abductions,” she said.

According to the Philippine Amusement ang Gaming Corp. (Pagcor), online gaming began in 2003 and was unregulated. Pagcor started to regulate gaming hubs in 2016.

The POGO business started to boom in 2017 under President Rodrigo Duterte, who was then trying to curry favor from China. This was marked by the influx of thousands of Chinese who entered the country legally and illegally to work in POGOs.

Last week, authorities closed down a Pogo company in Pampanga province following the arrest of a Chinese national and the rescue of 43 others who claimed they were abducted and forced to work in the gaming company.

The PNP said on Sept. 7 that it had recorded 27 kidnapping cases so far this year, 20 of which were POGO-related.

The PNP’s proposed measures to deal with POGO-linked crimes included imposing a requirement that POGO workers must show that there were no pending cases or arrest warrants against them from their home countries.

“We really don’t know these people who are entering our country. They might be fleeing their country to hide from justice,” Azurin said.

He also proposed monitoring all POGO workers upon their entry into the country.

Azurin said it was important that police and barangay officials knew where these workers were staying to enable authorities to check on whether they were abiding by the laws and ordinances in the country and to “keep track if they are paying the right taxes.”

“All government agencies should work together to attract foreign investors and at the same time we do not sacrifice the security of every Filipino,” he added.

Pimentel urged congressional leaders to make the POGO ban a legislative priority, saying it was the “moral duty” of Congress.

“We can’t afford to dilly-dally on banning POGOs when the nation’s moral fiber and peace and order are on the line,” he said.

“We should act now. It will be a bipartisan measure,” he added.

He was referring to Senate Bill No. 1281, filed by Sen. Joel Villanueva, which seeks to prohibit the conduct as well as the placing of bets on online gambling platforms.

But the burden of passing a measure to ban POGOs were on the Senate majority, Pimentel said.

“Get your act together. If you say ‘stop POGO,’ we [in the minority] will support you,’’ Pimentel said, quoting himself as telling majority senators.

Sen. Grace Poe, chair of the Senate committee on public services, also backed a total ban on POGOs. She cited recent findings of the ongoing inquiry which showed that the “social costs outweigh the economic gains” from POGOs.

“If before, this industry was hounded by issues of nonpayment of correct taxes, mass migration and real estate bubble, now it is aggravated by the issues of kidnapping, prostitution, torture and even murder involving POGO workers,” she said.

“It’s like POGO as a mother vice gives birth to a whole slew of other vices and crimes,” she added.

Finance Secretary Benjamin Diokno last week said the government collected P7.2 billion from Pogos at their peak in 2020, but this dropped to P3.9 billion in the following year.

The income from Pogos this year had been projected to reach P32 billion, but only P3 billion has been collected so far, he said.

—WITH REPORTS FROM INQUIRER RESEARCH AND INQUIRER.NET