Silence from the Palace on martial law’s 50th anniversary 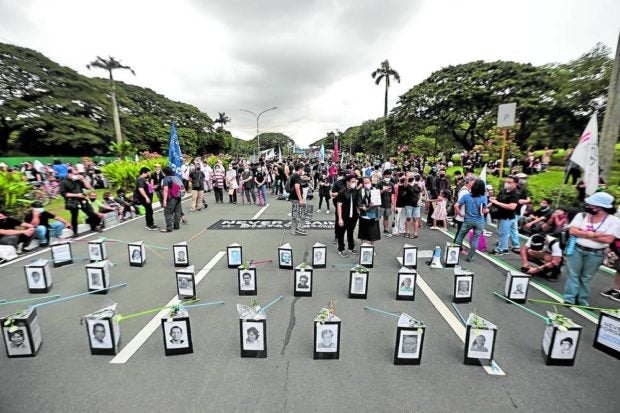 Members of the clergy remember their ranks who were martyred during martial law joins other protestors and march together along University Avenue towards University of the Philipines in Diliman, Quezon City on Wednesday, September 21, 2022, to protest and mark the 50th anniversary of the declaration of Martial Law by the late dictator Ferdinand Marcos Sr. (Photo by GRIG C. MONTEGRANDE / Philippine Daily Inquirer)

MANILA, Philippines — The silence, though expected, was still deafening.

Half a world away in New York City, President Ferdinand Marcos Jr. had no words to say to commemorate the 50th anniversary of his late father’s declaration of martial law, an occasion of painful, clamorous remembrance for those who survived or lost loved ones to the atrocities and human rights abuses.

Neither did Malacañang release any statement on the president’s behalf, amid Wednesday’s activities recounting the elder Marcos’ military rule, considered one of the darkest chapters of Philippine history marked by tortures, killings, illegal arrests, and media repression.

In 2017, then President Rodrigo Duterte, issued Proclamation No. 319, declaring Sept. 21 as a National Day of Protest “in solidarity with the people’s call against all excesses and shortcomings of the government, and with the people’s desire to uphold the highest standards of integrity, efficiency and accountability in government.”

But his predecessor’s order elicited no follow-up gesture from Marcos, who was in the United States for a six-day working visit, including an appearance at the 77th United Nations General Assembly in New York, where he delivered a speech on Wednesday (Manila time).

The president may have chosen to stay quiet about the martial law anniversary, but he could never deny the undeniable, according to Albay Rep. Edcel Lagman, whose brother Hermon Lagman was considered the first lawyer to be “disappeared,’’ on May 11, 1977, during Marcos Sr.’s regime.

In a privilege speech on Wednesday, Lagman said the president’s denials “do not and cannot change the horrors of the past.”

“For as long as he persists in denying the undeniable dictatorship of his father, then Marcos Jr. will forever be known as the ‘son of the dictator Marcos!’” Lagman said.

Marcos, in an interview aired last week on ALLTV channel, acknowledged “the abuses that occurred” during his father’s martial rule but said these happened “like in any war.”

The president claimed he did not resent being referred to as the “son of the late dictator” because “I know they’re wrong.”

“How many times have I been here in this room [in Malacañang] where [my father] was in consultation with different groups? A dictator does not consult. A dictator will just say, ‘Do this whether you like it or not,’” he said.

Lagman, however, said such consultations, when performed by a dictator, were nothing more than a “farce.”

“When an authoritarian leader with vast powers consults with favored sectors, these stakeholders will merely concur with the despot’s self-serving desires or decisions,” he said.

The Human Rights Violations Victims’ Memorial Commission has documented 11,103 people who suffered brutalities during the first Marcos administration from 1972 to 1986. Of this number, 2,326 were killed or forcibly disappeared.

In the face of attempts to whitewash the image of the elder Marcos, a group of teachers in Metro Manila has banded together to debunk lies about martial law and to correct false depictions of those years in a rosy light.

They intend to do this through forums, webinars, and social media.

“The role of teachers — whether in elementary or secondary — is to awaken (the students). Part of our responsibility is to awaken them to (historical) distortion and bad effects of fake news and disinformation,” said Rizza Bantillan, a high school teacher and lead convener of Tanggol Kasaysayan NCR.

In the classroom, Bantillan, who previously taught history before teaching values education, said she integrates lessons from the dictatorship in discussions about being truthful and how wrong it is to steal.

“When you say ‘don’t steal,’ it does not just simply apply inside the house. You should be able to inculcate (in the students the broader perspective of) looking at the government and who they should vote for,” she said.

It was disappointing, she said, that the son of a dictator, a “tax evader” and “plunderer,” had managed to return to power.

“As a teacher, you would question yourself, ‘did I do something (wrong)?’” Bantillan said.