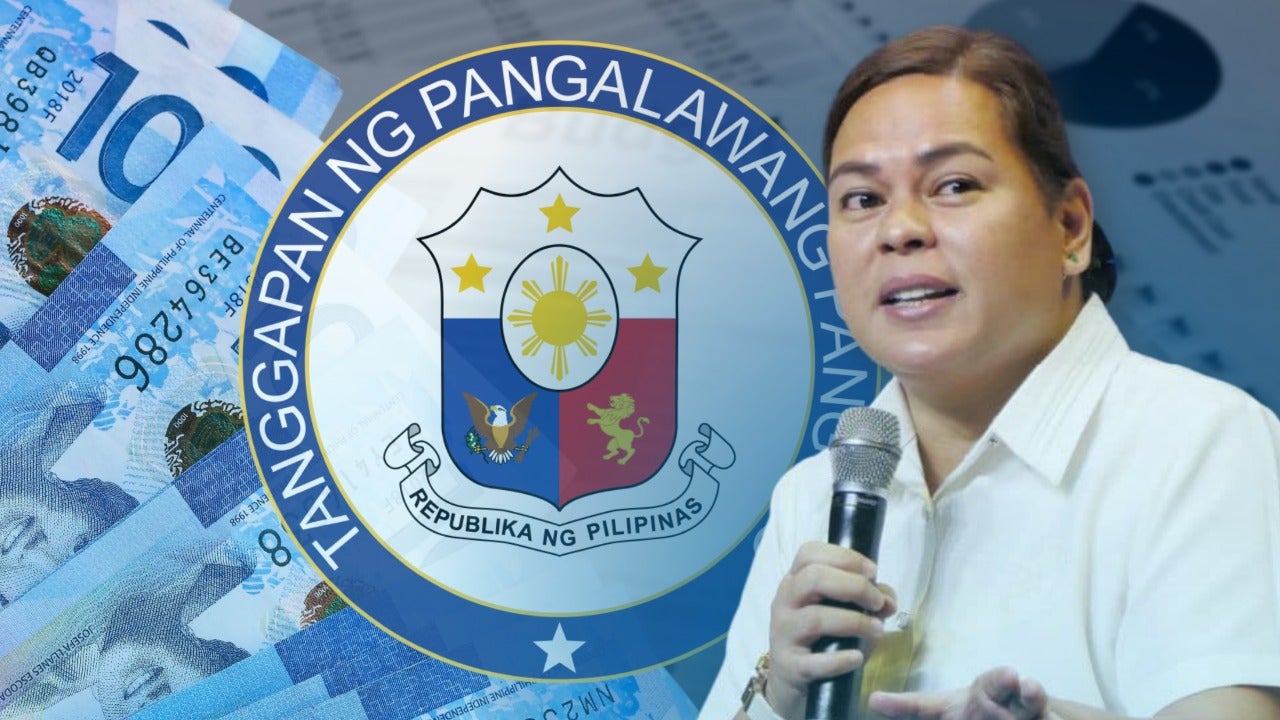 MANILA, Philippines—This week, the proposed P2.3 billion Office of the Vice President (OVP) budget for 2023 breezed through the House of Representatives, leaving several questions hanging in the air until the plenary debates.

On Wednesday (September 14), the deliberation of the proposed 2023 budget of the OVP was terminated in less than seven minutes by the House committee on appropriations.

Minority Floor Leader and 4Ps party-list Rep. Marcelino Libanan moved to terminate the budget briefing as a sign of respect for Duterte, who was personally present during the panel’s hearing.

There were members from the minority who wanted to ask questions about the OVP budget—particularly those from the Makabayan bloc —but Libanan said the questions would be entertained in plenary as a courtesy to Duterte.

They pointed out the huge budget increase compared to this year’s approved budget for the OVP, as well as the huge P500 million “confidential funds” included in the proposed budget.

In this article, INQUIRER.net will try to detail the OVP’s proposed budget and explain the confidential expenses included in the 2023 budget—what it is, when they can be used, and why it is being requested by the OVP.

The current administration is seeking a P2.3 billion budget for Duterte’s office next year—around three times higher than the P702 million budget given to the same office for 2022 under former Vice President Leni Robredo. 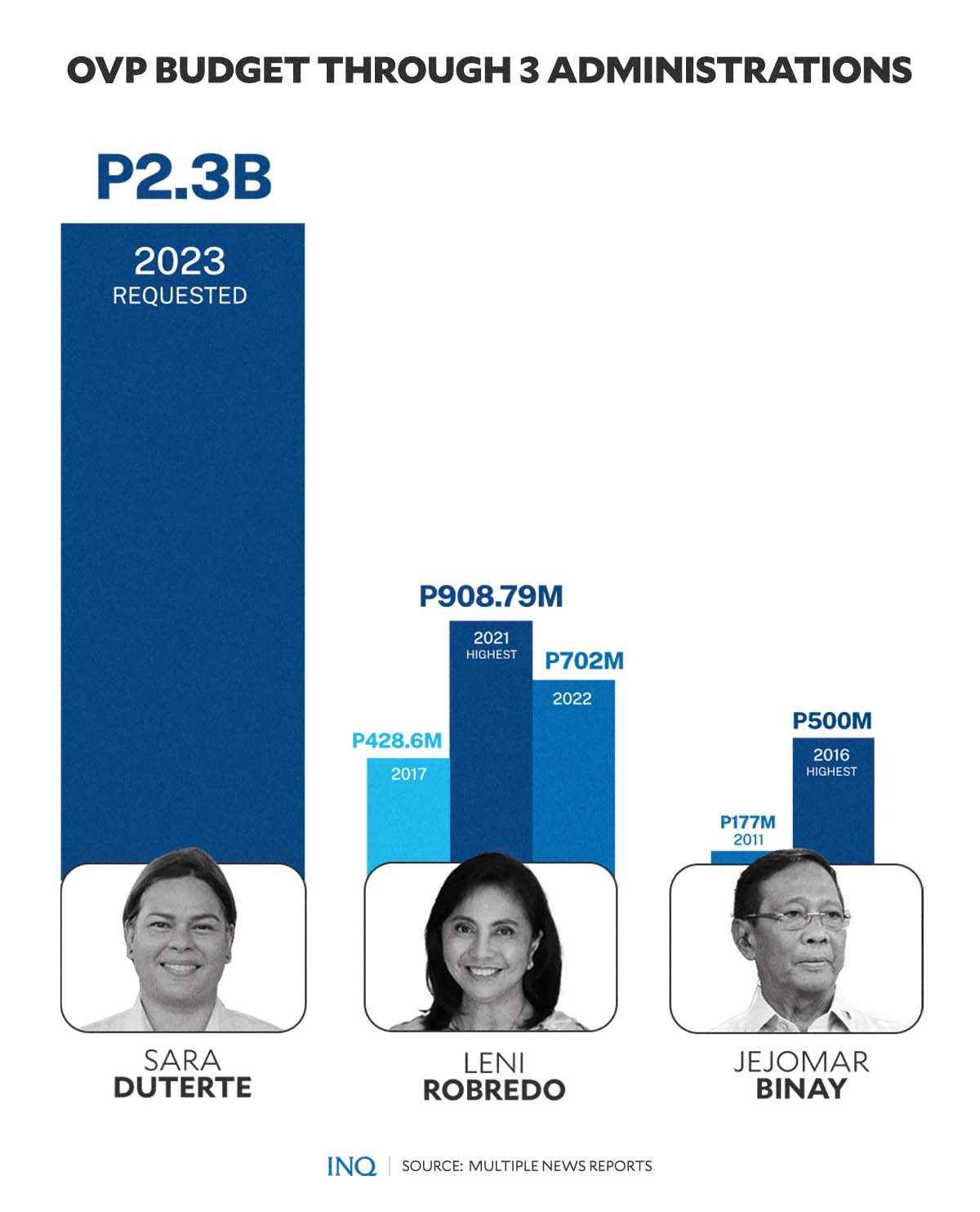 The program, according to OVP spokesperson Reynold Munsayac, will need P2.2 billion and utilized primarily for the OVP’s public assistance plans. Among these were:

“The bulk of the OVP budget will go into the essential social services that we provide, such as the financial subsidy, medical assistance, burial assistance, free ride, and livelihood programs,” Munsayac explained.

Details of the PagbaBAGO campaign are not immediately available.

Munsayac added that the aid will be given directly to the public through the seven satellite OVP offices nationwide.

“So, OVP intends to make these services and assistance available to most people, especially those in remote areas,” he said.

The allocations for the major current operating expenditures under the proposed 2023 budget of the OVP include:

According to the Department of Budget and Management (DBM), personal or personnel services included salaries and wages, social security contributions, and overtime pay.

“Capital expenditures, particularly those classified as capital goods or durable goods to be used for non-military and productive purposes, such as the construction of roads and bridges, dams, power and irrigation works, schools and hospitals, are generally desirable because of their high multiplier effect on the economy, i.e., they stimulate the growth and expansion of economic activities of the private sector and facilitate the integration of industries,” the DBM said.

According to former ACT Teachers Rep. Antonio Tinio, it was the first time that any public official—aside from the chief executive—would be given such huge funding for confidential expenses, which means its use and liquidation can be hidden from the public.

“This is unprecedented in our history. No public official, aside from the president, has been given a discretionary pork barrel this huge,” he said.

“This has to be scrutinized, and the Makabayan bloc is ready to make suggestions as to which programs will benefit more from these funds,” he added.

Munsayac said that the vast difference between the current OVP’s budget and previous OVP budgets might be due to differences in prioritized projects.

In the past years, there have been several briefings for proposed OVP budgets that lasted for just less than 10 minutes.

In 2016, the budget briefing for the proposed P428.618 million budget of the OVP under Robredo was finished in just three minutes. The following year, the briefing for the OVP’s proposed 2018 budget was over after two minutes. 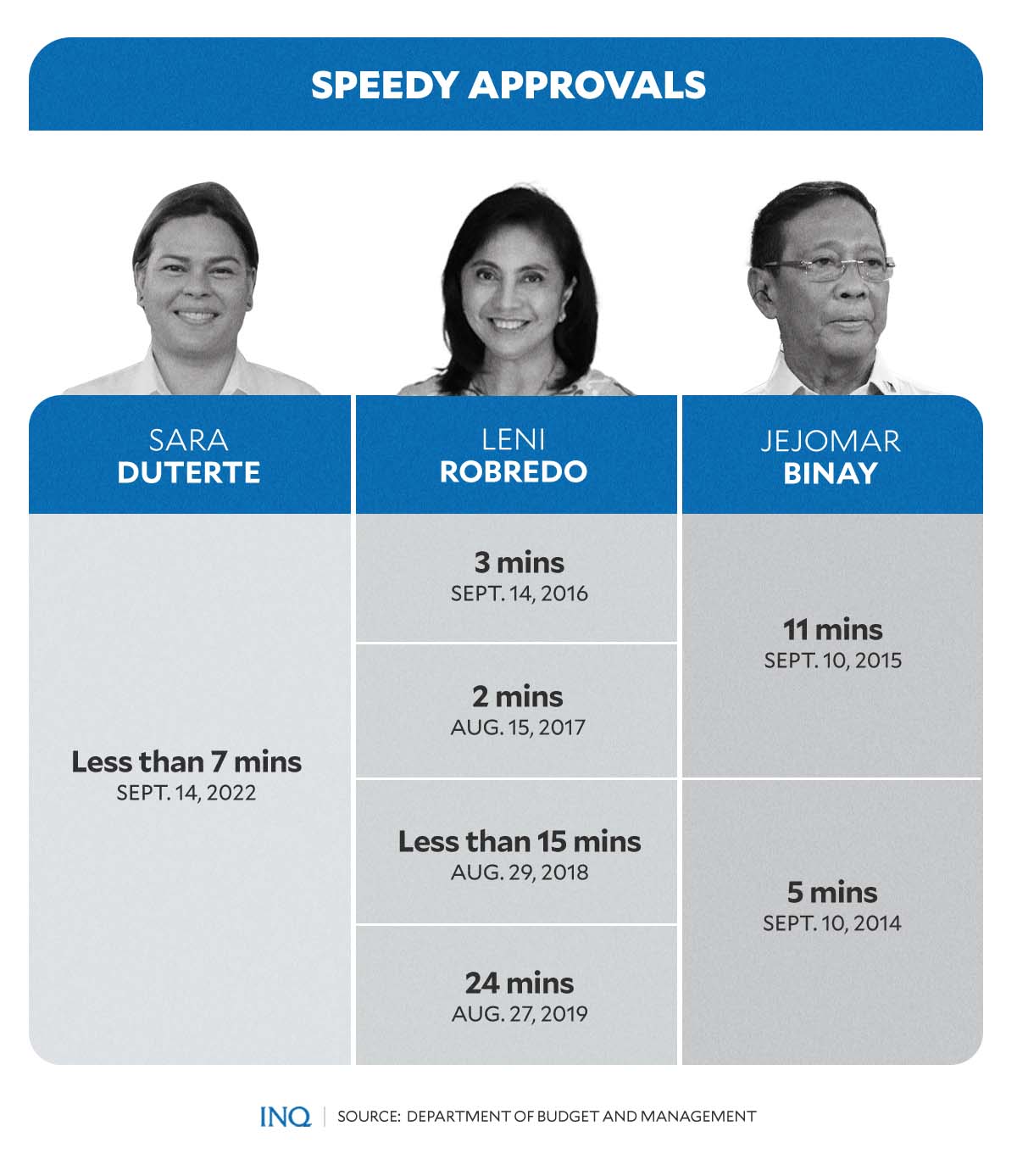 The House hearings for the OVP’s proposed budgets for 2019, 2020, and 2021, however, took longer—less than 15 minutes, around 24 minutes (although it only took a minute for the Senate to approve the OVP’s proposed 2020 budget), and 21 minutes, respectively.

Some budget briefings under Binay were also quick. In 2014, the House appropriations committee spent only five minutes deliberating the OVP’s proposed budget for 2015. A year after, the briefing for the proposed 2017 budget lasted only 11 minutes.

The recent briefing for OVP’s 2023 budget—which lasted for only 7 minutes—was, however, met with disappointment because of the sheer amount involved.

According to Zamboanga City Rep. Mannix Dalipe, the hearing was terminated without interpellation or questioning from congressmen. He cited “parliamentary courtesy” as a reason for the gesture.

“By tradition descending from parliamentary courtesy to a co-equal branch in government, I move to terminate the budget briefing of the Office of the President,” Dalipe said as he motioned to terminate the deliberations on the OVP’s proposed budget. 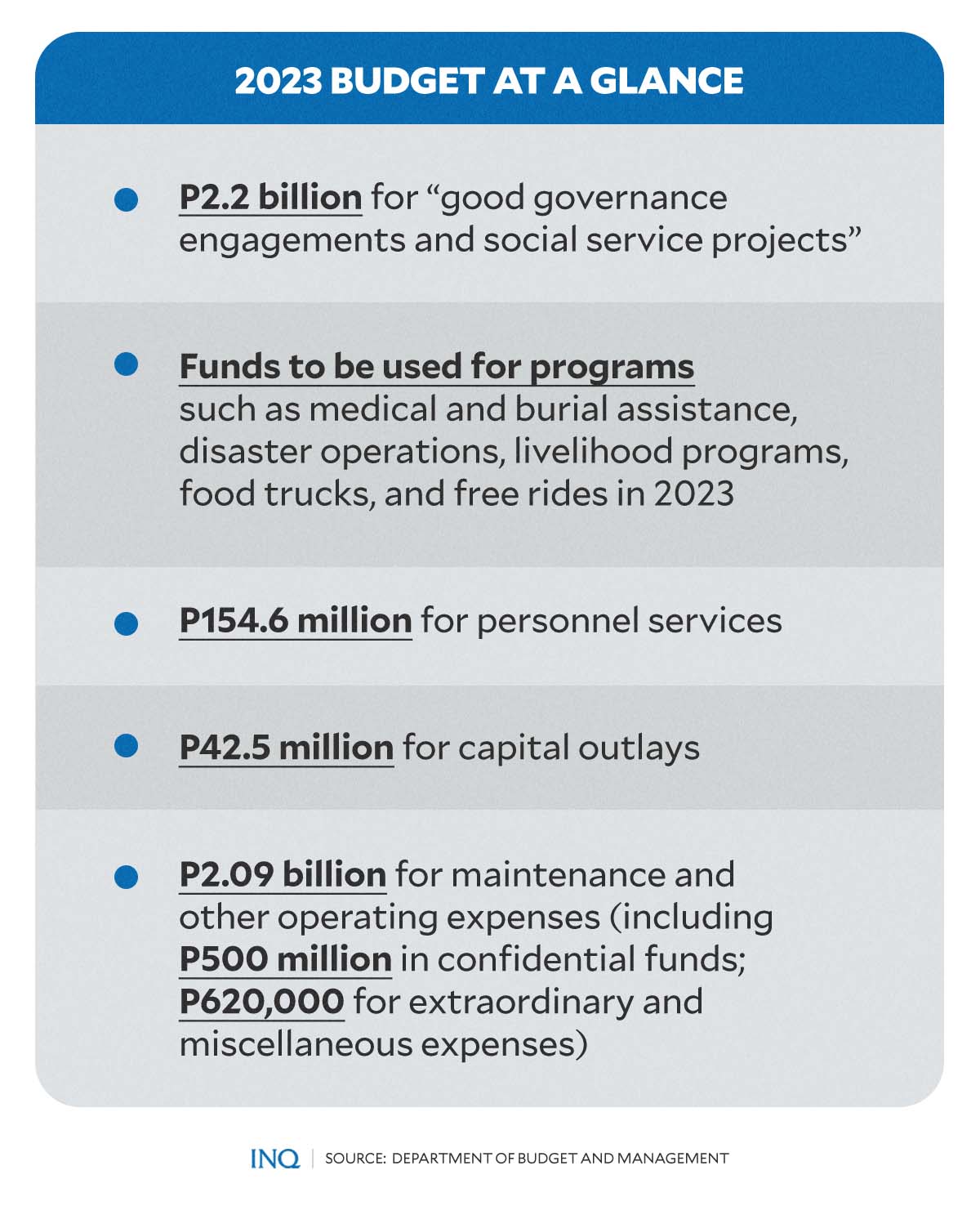 That so-called tradition applied to Robredo since she previously served one term as representative of Camarines Sur before being elected as Vice President.

A lawmaker from the opposition Makabayan bloc, however, claimed they were not allowed to scrutinize the proposed OVP budget for 2023 after it was terminated in less than 7 minutes.

“The Makabayan bloc lawmakers were the only ones in line to interpellate on a budget of the Office of the Vice President but were not allowed to put forward questions or clarifications,” said Gabriela Rep. Arlene Brosas.

“This is a clear disregard for the Filipino people’s right to scrutinize the budget of government offices. It is our right to know where the P2.292 billion funding for the Office of the Vice President went,” she added.

Brosas also said the Gabriela Partylist wanted to ask about the OVP’s P500 million confidential fund, which she called a “black budget.” She claimed it is the first time the office would be given such funding.

“Gabriela Partylist was supposed to question the OVP’s proposed P500 million confidential fund as this is the first time the office will be given a black budget,” she said.

“Why does the Vice President need confidential funds? What are the items that OVP would spend on confidentially? If they have nothing to hide, they should be ready to answer questions about this,” she added.

“We are talking about P500 million, which could have been used to give cash aid to low-income families or education subsidy for struggling students.”

Munsayac previously explained that the fund allocated for “confidential expenses” will be used on the parameters set by the DBM and the Commission on Audit (COA).

“The position and mandate of the Vice President allow her to utilize those kinds of funds regarding peace and order and national security,” noting that the OVP’s livelihood projects will be implemented in conflict areas,” he said.

“So we will make sure that this fund will be used correctly and only to support the OVP’s programs,” he added.

Based on Joint Circular No. 2015-01 of the DBM, COA, Department of the Interior and Local Government (DILG), Department of National Defense (DND), and Governance Commission for GOCC(GCG), confidential expenses refer to the expenses “related to surveillance activities in civilian government agencies that are intended to support the mandate or operations of the agency.”

Confidential fund refers to “the lump-sum amount provided as such in the GAA for NGAs, in appropriation ordinances for LGUs (local government units), and in the COBs (corporate operating budget) for GOCCs (Government-Owned or-Controlled Corporation), for their Confidential Expense.”

Confidential Funds can only be used for the following:

For Zyza Nadine Suzara, director of governance think tank iLead ( Institute for Leadership, Empowerment, and Democracy), the confidential funds might not be aligned with the mandate of the OVP.

“It’s strange and I think it’s not fiscally prudent for the OVP to request [such funds]. First of all, I think the OVP is not involved in those types of activities—such as programs like peace talks…programs [involving] law enforcements,” Suzara said in the online program Facts First.

“Is that really the mandate of the OVP? To carry out confidential activities?”

Amid the criticisms, Marikina City Rep. Stella Luz Quimbo clarified that the OVP’d P2.3 billion budget for next year has not yet been approved and will still undergo plenary debates.

“We did not pass the budget of the OVP yesterday. We simply had a briefing during the hearing,” Quimbo explained in an interview over ANC’s Headstart.

“It’s not yet approved. Remember that this will have to go through the plenary debates and our internal deadline is October 1,” she added.