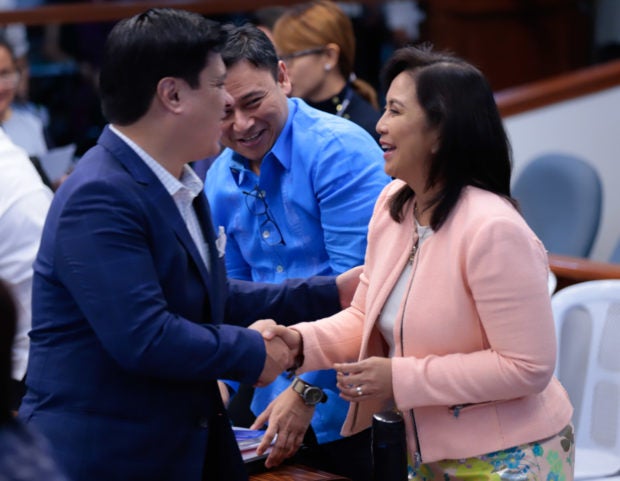 Senate Majority Leader Migz Zubiri (left) approached Vice President Leni Robredo (right) immediately after her office’s proposed P664.8 million budget was deemed submitted in the plenary Monday morning. It took Sen. Sonny Angara (middle), chair of the Senate finance committee, about a minute in having it deemed approved by the body as no one among the senators registered to interpellate the Office of the Vice President’s (OVP) appropriations for next year. PRIB Photo

MANILA, Philippines — It took only about a minute for the Senate to approve in the plenary the proposed P664.8M budget of the Office of the Vice President (OVP) for 2020.

Not a single senator raised a question when Senator Sonny Angara, chairman of the Senate committee on finance, presented on the floor the budget proposal for Vice President Leni Robredo’s office.

Senate Majority Leader Juan  Zubiri manifested that no senator registered to interpellate on the OVP’s budget.

Zubiri then moved to have the OVP’s budget deemed submitted and approved.

Robredo was present at the session hall when the proposed budget of her office was approved by the chamber.

BREAKING: 5 suspects in murder of ex-solon now under CIDG’s custody