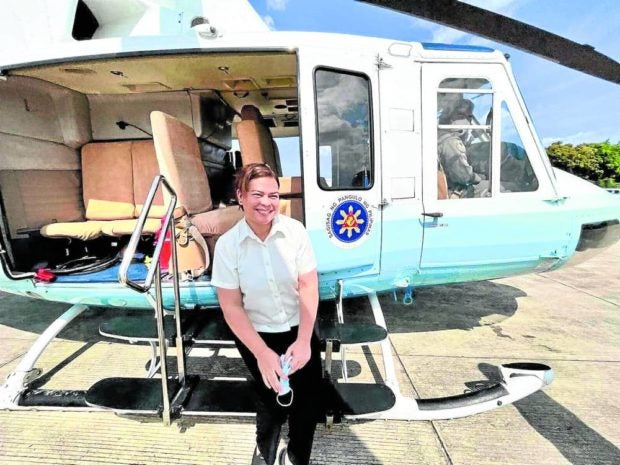 FOR OFFICIAL USE ONLY | Netizens are quick to notice and criticize this post on Vice President Sara Duterte’s Facebook page wherein she greets President Ferdiand Marcos Jr. on his birthday and thanks him for lending her a helicopter so she can attend to her children.

MANILA, Philippines — The Office of the Vice President’s (OVP) P2.3-billion budget for 2023 sailed through the House Committee on Appropriations hearing in just 10 minutes, with neither a briefing nor a question, and with the chamber’s leaders led by Speaker Martin Romualdez in attendance.

The hearing was called to order at 9:24 a.m. by House committee chair Elizaldy Co, who expressed full support for the OVP’s P2.3-billion proposed budget, citing Duterte’s accomplishments in less than 100 days of assuming office.

“The OVP has been very active. Within that short period, various satellite offices have been established all over the country which enabled the government to expand the reach of its social services,” he said.

“Indeed, the growing population and its growing demand for more government assistance call for such proactive and whole-of-government approach. The OVP is no longer just the passive office as originally envisioned, but by necessity must actively engage with the people,” Co pointed out.

In his short message prior to his motion to terminate, Libanan explained that it was out of courtesy by the House of Representatives.

“While some members of the Makabayan bloc would like to propound questions on some new items in the budget, they also join us in that they’d rather propound questions in the plenary to extend our courtesy to the OVP,” he said. “Therefore, Mr. Speaker, I move that we terminate the budget briefing on the OVP. So moved.”

Vice President Sara Duterte thanked the House appropriations committee for its swift termination of the budget hearing and offered to collaborate with the lawmakers in their respective legislative districts and party lists.

Members of the Makabayan bloc criticized what it called the lower chamber’s “practice of servility” to the two highest offices of the country, pointing out that it was a disservice to the public for Congress to be reduced into a rubber stamp and doormat of the Executive.

“Congress should stop this practice of servility to the president and the vice president. It should perform its mandate of guarding the hard-earned funds of the people,” said Deputy Minority Leader and ACT Teachers Rep. France Castro.

She pointed out that the OVP budget included P500 million in confidential funds which “may pose as a national security risk as even the President is not privy on where and how it would be spent.”

Castro also cited the OVP’s operational funds which could endanger civilian supremacy “because such projects give excessive entanglement of the military in civilian functions.”

“We need to fulfill our sworn duty to scrutinize the budget because this is one of the main ways to detect abuse and underutilization of the people’s fund. By just letting the OP (Office of the President) and OVP go without nary a question, then Congress is being remiss of this duty and damaging its own name,” she said.

Assistant Minority Leader and Gabriela Rep. Arlene Brosas added that the Makabayan bloc lawmakers were in line to interpellate on the OVP budget but were not allowed to ask questions or clarifications.

But it was a different scenario in the hearing on the proposed P666.25-billion budget of the Department of Education (DepEd), which Duterte heads in a concurrent capacity.

During Wednesday’s hearing, Duterte said the country’s problem on classroom shortage was an unsolvable “quicksand,” committing her agency to focus on setup of a flexible learning system based on the concept of “not all learning happens inside the classroom.”

But some lawmakers disagreed with her view and insisted on the importance of classroom learning.

Opposition Albay Rep. Edcel Lagman asked Duterte if she were of the opinion that learning was more efficient and effective if conducted in a formal classroom, to which she said, “I beg to disagree because there are immersions outside of the classroom that children still learn especially when they are outside of the school where our teachers take our learners to completely explain the concepts that they want the children to learn.”

Lagman bluntly responded, “but that’s more the exception than the rule because classes should be conducted in classrooms.”

Duterte was also asked if she was willing to infuse some of her P150-million confidential fund into other DepEd programs whose budgets were cut, but the vice president said she would not give up even a portion of this, claiming she needed it intact to have very good intelligence and surveillance to effectively address education issues, mostly the criminal kind, including the abuse of students as well as the recruitment by terrorists or insurgents in schools.

While her budget sailed through a friendly Congress quickly, the vice president did not completely dodge public scrutiny after netizens sounded the alarm on her supposed regular use of a presidential helicopter, which she herself revealed in a birthday greeting to President Ferdinand Marcos Jr.

In a Facebook post on Tuesday, Duterte thanked her erstwhile running mate, who celebrated his 65th birthday on Sept. 13, for lending her the 250th presidential air wing so she could personally attend to her kids.

“Thank you for putting a premium on the desire of a working mother to be present in her children’s lives,” Duterte said in her birthday message, which included a photo of her sitting in the idle chopper.

This did not sit well with netizens, who saw it as a misuse of public funds at a time when Filipinos were suffering from inflation and high gas prices.

However, her spokesperson, Reynold Munsayac, sought to cushion the fallout by saying she did not use the chopper every day.

“She and her family are already Manila-based and her children are already studying here,” he said. “They use land vehicles for their daily use. They only use the chopper for official work and functions.”