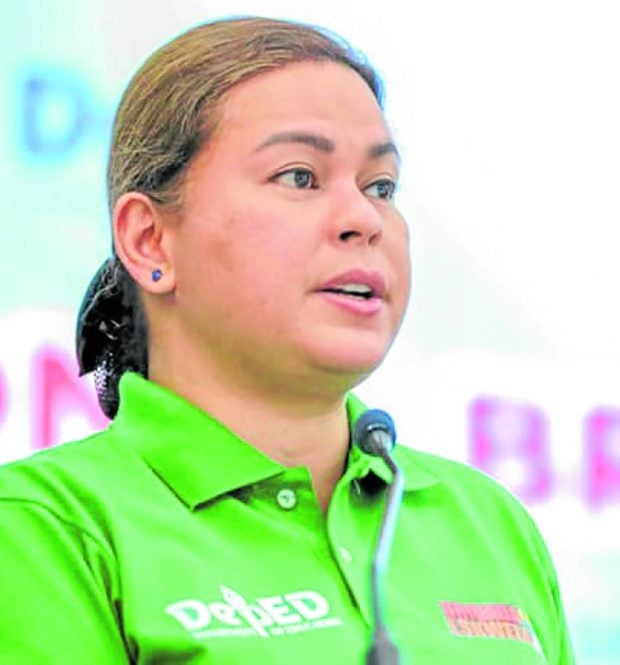 MANILA, Philippines — Lawmakers from the progressive Makabayan bloc are intent on questioning the P2.3-billion budget that Vice President Sara Duterte’s office is seeking from Congress for next year.

As they put it on Saturday, it will be the first time in history that the constitutional successor to the President will have such huge “pork” at her disposal.

The proposed 2023 budget of the Office of the Vice President (OVP) — more than triple the P702 million received by the agency this year under former Vice President Leni Robredo — includes P500 million in confidential funds and P2.2 billion for “good governance engagements and social service projects.”

At an online forum, Kabataan Rep. Raoul Danniel Manuel described Duterte’s allocation as a “vice presidential pork that we will not let slide.”

Former ACT Teachers Rep. Antonio Tinio said it was the first time that any public official apart from the chief executive would be given such enormous funding.

“This is unprecedented in our history. No public official, aside from the president, has been given a discretionary pork barrel this huge,” he said at the same forum.

“This has to be scrutinized, and the Makabayan bloc is ready to make suggestions as to which programs will benefit more from these funds,” Tinio said.

In a landmark ruling in 2013, the Supreme Court defined pork barrel as “lump-sum, discretionary funds primarily intended for local projects, and utilized through the respective participation of the legislative and executive branches of government, including its members.”

The tribunal struck down all iterations of pork, including “all informal practices of similar import and effect, which the court similarly deems to be acts of grave abuse of discretion amounting to lack or excess of jurisdiction.”

Reached for comment on the Makabayan bloc’s plan, OVP spokesperson Reynold Munsayac said the office would look into their concerns.

At a press briefing last week, Munsayac explained that the bulk of the funding would go to basic social services and financial subsidies to be distributed by the OVP’s seven satellite offices that offer medical and burial assistance.

The OVP’s confidential funds, according to Munsayac, will be used for livelihood projects in conflict areas.

Besides the OVP budget, Duterte, being the concurrent education secretary, will be in control of the Department of Education’s (DepEd) allocation, which rose from P633.3 billion in 2022 to a proposed P710.6 billion next year. The OVP will defend its budget proposal under the National Expenditure Program (NEP) before the House appropriations committee on Sept. 14, the same day that DepEd would brief lawmakers on its proposed funding.

The NEP is the budget document prepared and submitted by the country’s economic managers to Congress for its approval.

During Robredo’s term, the highest OVP budget was P900 million, in 2021. In contrast, the highest budget received by her predecessor Jejomar Binay was P500 million in 2016. What was left of the OVP budget upon Binay’s departure was inherited by Robredo when she assumed office in June 2016.

In 2017, Robredo proposed a lower budget of P428.6 million, which was immediately approved by Congress.

Her budget grew by at least 20 percent in 2018, 2019 and 2021 while it increased by 5.5 percent in 2020. It went down 22 percent between 2021 and 2022.According to Manuel, previous budget proposals of the OVP did not include funds for any confidential expenses, which are usually allotted to the Office of the President (OP), the military and the police, and other offices with surveillance requirements.

Robredo, who was in the political opposition, never got a share of confidential funds in six years under the previous administration. Duterte, on the other hand, is allied with President Marcos, her running mate in the May elections.

The NEP defines confidential expenses as surveillance-related activities in civilian government agencies, the release of which is subject to the approval of the head of the concerned agency.

But confidential funds, along with intelligence funds, which the OVP’s proposed budget does not have, are difficult to examine, according to state auditors, because of their secret and discretionary nature.

The OP under the new Marcos administration is seeking the same P4.5 billion in confidential funds as its predecessor.

On Friday, the House committee swiftly concluded the budget briefing for the OP in a hearing that lasted seven minutes, with no one given the opportunity to question its confidential funds.

In two weeks, when it’s the OVP’s turn to present its budget, “we expect that they will invoke tradition once more to swiftly pass the agency’s budget at the committee level,” according to Manuel.

“But the Makabayan bloc will exhaust all means to register our objection to that,” he said.

It is a House tradition to terminate budget briefings for the OP and the OVP early as a matter of parliamentary courtesy.

Under the OVP’s budget proposal, P91.35 million will go to general administration and support, while P2.2 billion will go to “good governance engagements and social service projects,” which are in lump sum or not itemized.