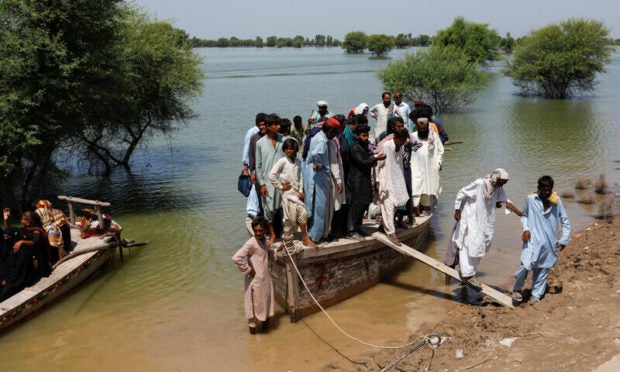 ISLAMABAD — Prime Minister Shehbaz Sharif on Saturday urged people across the country to generously donate baby food and blankets for flood-affected people on an urgent basis.

Addressing a meeting to review rescue and relief operations in flood-hit areas, the premier appealed to the nation to donate quilts and warm clothes for those “sleeping under the open skies” as winter was approaching.

“There are several non-governmental organizations with a good reputation, donate to them. Or, you can give these essentials to centres set up by the army and provincial authorities,” he said.

“The affected people are looking towards you. In these times of need, I urge all the well-to-do people to come forward and help,” PM Shehbaz stressed.

In its daily situation report on Saturday, the National Disaster Management Authority said the death toll from floods has risen by 37 during the last 24 hours.

The cumulative death toll since June 14 now stood at 1,545, the report added.

It showed that 92 individuals had sustained injuries due to floods in the last 24 hours, raising the total number of injured reported since mid-June to 12,850.

Record monsoon rains in south and southwest Pakistan and glacial melt in northern areas have triggered the flooding that has affected nearly 33 million people, sweeping away homes, crops, bridges, roads and livestock and causing an estimated $30 billion of damage.

Water continues to ‘recede’ in Sindh

The floods have displaced hundreds of thousands of people in Sindh, where water levels have started dropping in recent days albeit gradually. Officials estimate that it may take two to six months before floodwaters recede completely.

On Saturday, Mehar Assistant Commissioner (AC) Mohsin Sheikh told Dawn.com that the water level had dropped approximately three feet at the ring bund and expressed the hope that the floodwater would recede completely from there within three days.

He further said he was expecting the water to recede from the highway leading to the city in seven days. “Once it recedes, one track of the highway will be opened for traffic,” the AC added.

Meanwhile, water was standing up to eight feet in Mehar’s villages, he said.

Johi Assistant Commissioner Muhammad Ali Baloch estimated that water had dropped by around three feet in the region’s outskirts.

Similarly, Dadu Assistant Commissioner Shahnawaz Merani told Dawn.com that the water was now flowing back into Manchhar Lake from the city’s remote areas.

He said tent cities were being established in the Dadu city to house flood-affected individuals and families.

In Bhan Syedabad, MNA Sikandar Ali Rahoupoto told Dawn.com, the water was continuously receding in the city and its outskirts and there was no pressure on the city’s ring bund.

“The water is standing up to eight to nine feet in Bhan Syedabad, which is continuously dropping. Life has returned to Bhan Syedabad,” he said.

Meanwhile, an engineer of the provincial irrigation department, Mahesh Kumar, said the water level in Manchhar Lake was measured at 121.2-foot reduced level around noon on Saturday. “The water from the lake is now flowing in the River Indus,” he said.

On Saturday afternoon, Indus was witnessing a medium-level flood at Kotri, according to the Flood Forecasting Division’s website. 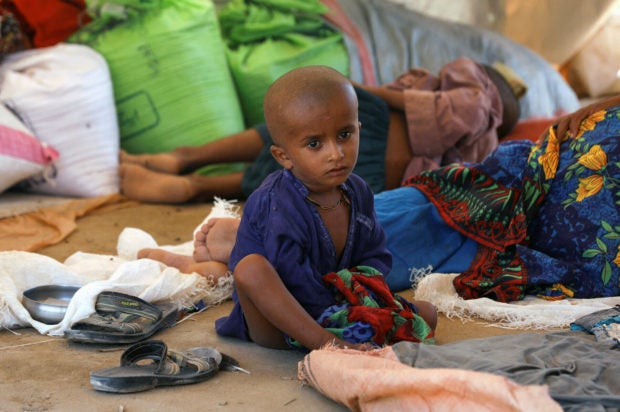 A displaced boy sits as his family takes refuge in a camp, following rains and floods during the monsoon season in Sehwan, September 16, 2022. REUTERS

Meanwhile, in a visit to Matiari today, Sindh Chief Minister Murad Ali Shah expressed concerns over the rising cases of dengue and other diseases in flood-hit areas of Sindh.

“Not just dengue, we are also seeing an increasing number of diarrhoea and malaria cases,” he noted, announcing that the government had decided to form separate wards for dengue patients.

“Medical camps have been established and we are ensuring the provision of the required medicines there,” Shah went on to say.

Talking about relief efforts in Matiari, the chief minister highlighted that floodwaters were entering the Saeedabad tehsil. “We have started pumping out the water. The deputy commissioner and irrigation department have been instructed to drain out the water via pumps.”

Separately, he said, the government was also planning on de-watering agricultural lands to ensure the sowing of crops to recover the losses suffered by farmers.

“Draining out water from under the ground and irrigation channels is also a part of our plans,” the CM promised, adding that farmers would also be provided seeds, fertilizers and diesel for tractors.

Apart from Matiari, the chief minister will also visit Shaheed Benazirabad and Naushero Feroz today and review the relief and rehabilitation efforts in all the affected areas.

Sindh Information Minister Sharjeel Memon told the media in Hyderabad, where he was visiting a tent city established for flood-affected citizens, that people displaced by deluges had started returning to their homes, with floodwaters receding in the province.

“The water is being drained as relief work continues,” he said, adding that “we still cannot say that the situation is back to normal.

“The rescue phase is complete and the government’s complete focus is now in relief work, after which we will work on rehabilitation.”

Memon said as part of the relief work, the government was focusing on sending the residents of areas from where the water was being discharged back to their homes and expressed the Sindh government’s resolve to continue relief efforts until “all displaced individuals’ families return home safely”.

And “we are giving ration bags and tents to them so that they can restart their lives [in their hometowns”, he added. “We are also providing them transport.”

He assured that no relief camps would be closed until all displaced persons returned home safely.

“This is our obligation and we owe it to people.”

The minister said the Sindh government would rebuild “all houses damaged by floods. He further said that health, too, remained a top priority of the provincial government.

In this regard, he said a connection room had been set up which could be accessed from across the province for health facilities and in case of medical emergencies.

He told media persons that he had asked the Hyderabad deputy commissioner to conduct a survey to collect data on the house damaged by floods.

“And I also ask the media to play their role in this survey and point out any houses that we may miss.”

Memon then reiterated that the “good news is that water is now receding across Sindh”.

“The water level at Kotri barrage has dropped and it is now easier to drain water,” he said, adding the process of draining water was also being expedited.

The minister said 23 districts in the province were badly affected by floods, which had so far claimed 678 lives in Sindh.