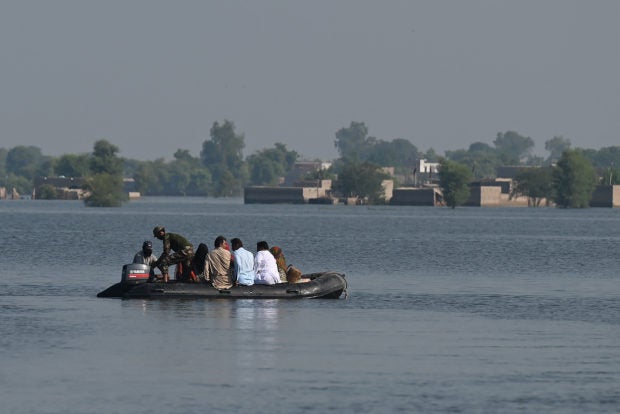 KARACHI — United Nations Secretary-General Antonio Guterres said Saturday that he has “never seen climate carnage” on such a scale as he toured parts of Pakistan hit by floods, blaming wealthier countries for the devastation.

Nearly 1,400 people have died in flooding that covers an area the size of the United Kingdom and has wiped out crops and destroyed homes, businesses, roads and bridges.

Guterres has said he hopes his visit will galvanize support for Pakistan, which has put the provisional cost of the catastrophe at more than $30 billion, according to the government’s flood relief center.

“I have seen many humanitarian disasters in the world, but I have never seen climate carnage on this scale,” he said at a press conference in the port city of Karachi after witnessing the worst of the damage in southern Pakistan.

“I have simply no words to describe what I have seen today.”

Pakistan receives heavy — often destructive — rains during its annual monsoon season, which is crucial for agriculture and water supplies.

But downpours as intense as this year’s have not been seen for decades, while rapidly melting glaciers in the north have for months heaped pressure on waterways.

“Wealthier countries are morally responsible for helping developing countries like Pakistan to recover from disasters like this, and to adapt to build resilience to climate impacts that unfortunately will be repeated in the future,” Guterres said, adding that G20 nations cause 80 percent of today’s emissions.

Pakistan is responsible for less than one percent of global greenhouse gas emissions, but is eighth on a list compiled by the NGO Germanwatch of countries most vulnerable to extreme weather caused by climate change.

Around 33 million people have been affected by the floods, which have destroyed around two million homes and business premises, washed away 7,000 kilometers (4,300 miles) of roads and collapsed 500 bridges.

Guterres has lamented the lack of attention the world has given to climate change — particularly industrialized nations.

“This is insanity, this is collective suicide,” he said after arriving in Pakistan on Friday.

The effect of the torrential rain has been twofold — destructive flash floods in rivers in the mountainous north, and a slow accumulation of water in the southern plains.

“All the children, men and women are roasting in this scorching heat. We have nothing to eat, there is no roof on our heads,” Rozina Solangi, a 30-year-old housewife living in a displacement camp near Sukkur, told AFP on Friday.

“He must do something for us poor,” she said of the UN chief’s visit.

The meteorological office said Pakistan has received five times more rain than normal in 2022. Padidan, a small town in Sindh province, has been drenched by more than 1.8 meters (71 inches) since the monsoon began in June.

Water levels have reached far higher in areas where rivers and lakes have burst their banks, creating dramatic inland seas.

Thousands of temporary campsites have mushroomed on slivers of high ground in the south and west — often roads and railway tracks in a landscape of water.

With people and livestock crammed together, the camps are ripe for outbreaks of disease, with many cases of mosquito-borne dengue reported, as well as scabies.

During his speedy tour, Guterres stopped at some of these makeshift camps and met with desperate flood victims, including a woman who gave birth overnight.

Wearing an Ajrak shawl with a traditional Sindhi block print, he later inspected the 4,500-year-old Unesco world heritage site Mohenjo-daro, which has suffered water damage from the relentless monsoon rain.