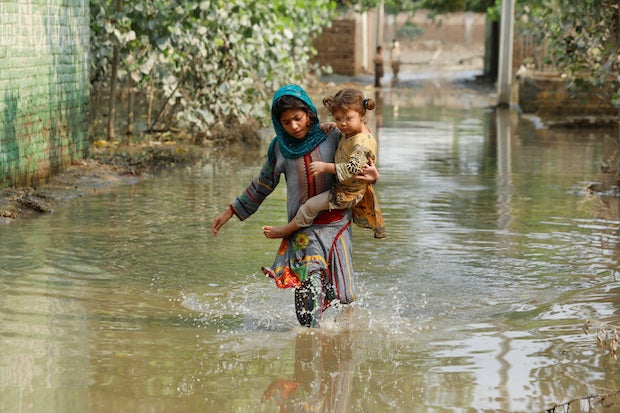 A girl carries her sibling as she walks through stranded flood water, following rains and floods during the monsoon season in Nowshera, Pakistan Sept. 4, 2022. (REUTERS/Fayaz Aziz)

Record monsoon rains and melting glaciers in Pakistan’s northern mountains have brought floods that have affected 33 million people and killed at least 1,290, including 453 children. The inundation, blamed on climate change, is still spreading.

He said about 100,000 people would be affected by the breach but it would help save more populated clusters and also reduce water levels in other, harder-hit areas.

“By inflicting the breach we have tried to save Sehwan town. Water levels on Johi and Mehar towns in Dadu district would be reduced by this breach in the lake,” Shoro told Reuters.

It was not clear how many of the 100,000 asked to leave their homes would actually do so.

Some displaced by the floods have complained that shelters are crowded, while others are reluctant to leave their possessions.

Aside from historic rainfall, southern Pakistan has had to contend with increased flooding as a surge of water flowed down the Indus river.

The country has already received nearly three times the 30-year average rainfall in the quarter through August, totaling 390.7 millimeters (15.38 inches). Sindh province, with a population of 50 million, was hardest hit, getting 464% more rain than the 30-year average.

Being downstream on the Indus river, the southern parts of the country have witnessed swelling river waters flowing from the north. Pakistan’s limited dams and reservoirs are already overflowing and cannot be used to stop downstream flows.

Tarbela dam in the north-west has been at capacity — 1,550 feet and 5.8 million acre-feet — for weeks, according to National Disaster Management Authority (NDMA) data.

Downstream in Sindh, barrages are under pressure with the Indus river in a high flood level, the NDMA said in its latest situation report.

Authorities also prepared for more rain in the north over the next few days up until Tuesday.

“Pakistan Meteorological Department (PMD) has forecasted that weak monsoon currents from the Arabian Sea are penetrating upper and central parts of the country which subsequently cause rain-wind / thundershowers,” the NDMA said in an advisory.

It cautioned local administrations to be on an enhanced state of alertness, and to restrict vehicle movement in areas prone to flash floods and landslides as well as those close to water channels.

It said some populations in the north could be at risk and advised “timely evacuation”.

The overnight death toll from the floods increased by 25, of which 12 were children, according to an NDMA update. The United Nations children’s agency UNICEF said there was a risk of “many more” child deaths from disease after floods.

“As Pakistan battles one of the worst climate-induced calamities, among the most adversely affected are children,” Sharif said on Twitter.

On Sunday, flights carrying aid from UNICEF, Qatar, and the United Arab Emirates landed in Pakistan.

From furnace to flood: world’s hottest city in Pakistan now under water