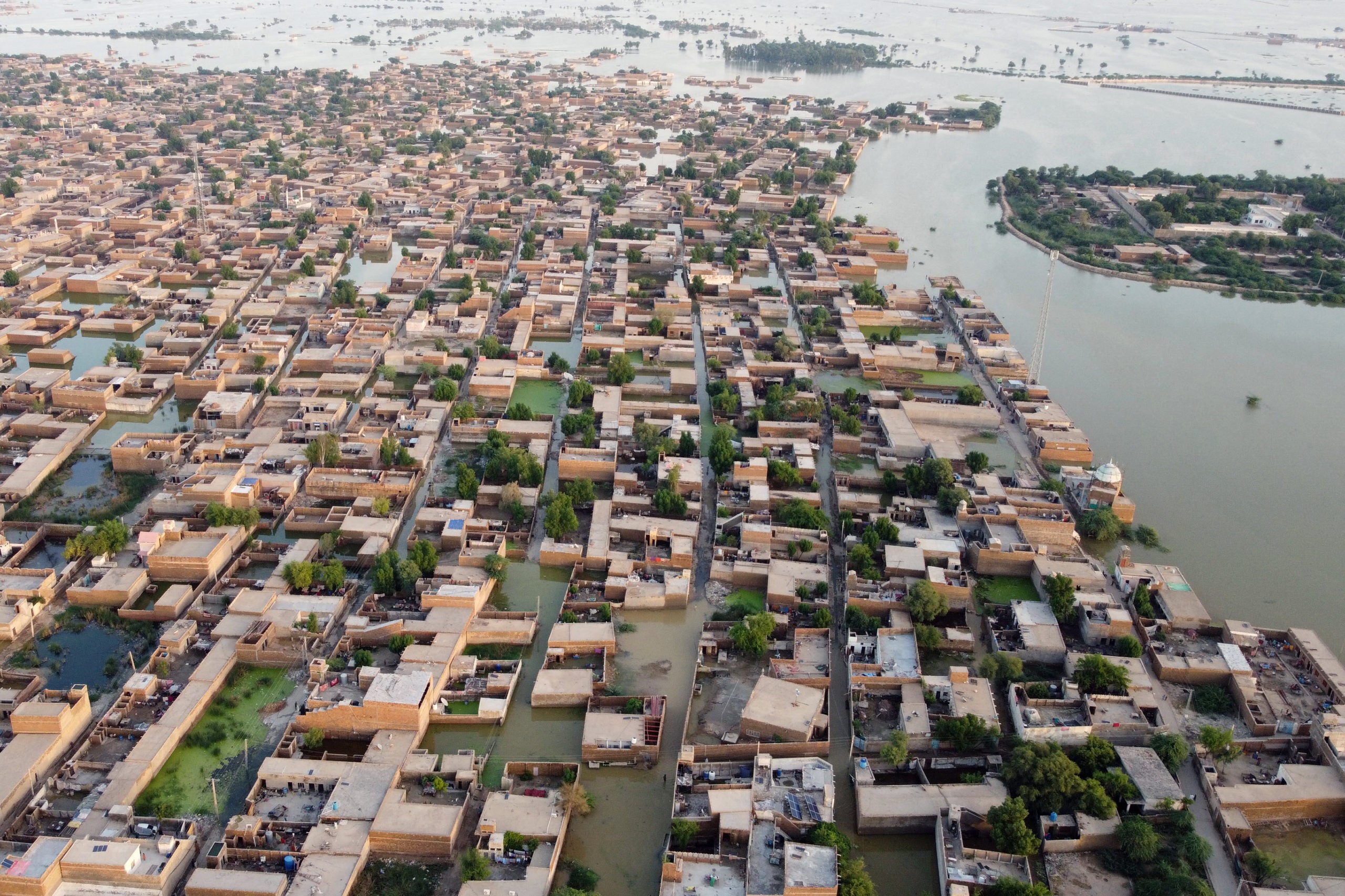 This aerial photograph taken on September 1, 2022 shows flooded residential areas after heavy monsoon rains in Dera Allah Yar town of Jaffarabad district, Balochistan province. – Monsoon rains have submerged a third of Pakistan, claiming at least 1,190 lives since June and unleashing powerful floods that have washed away swathes of vital crops and damaged or destroyed more than a million homes. (Photo by Fida HUSSAIN / AFP)

KARACHI, Pakistan — The toll from cataclysmic floods in Pakistan continued to climb on Saturday with 57 more deaths, 25 of them children, as the country grapples with a relief and rescue operation of near unprecedented scale.

A high-level body set up to coordinate the relief effort met in Islamabad on Saturday for the first time, chaired by Prime Minister Shehbaz Sharif, to take stock of the disaster.

Record monsoon rains and melting glaciers in northern mountains brought floods that have affected 33 million people and killed at least 1,265 people, including 441 children. The inundation, blamed on climate change, is still spreading.

The proportion of children’s deaths has raised concern. On Friday, the United Nations children’s agency (UNICEF) said there was a risk of “many more” child deaths from disease after floods.

The floods that have inundated a third of the country were preceded by four heatwaves and multiple raging forest fires, the disaster management chief told the high-level meeting, highlighting the effects of climate change in the South Asian nation.

“The year 2022 brought some harsh realities of climate change for Pakistan,” the chief of the National Disaster Management Authority Lieutenant-General Akhtar Nawaz told a briefing for the country’s top leadership.

“This year we did not witness a spring season – we faced four heatwaves which caused large-scale forest fires across the country,” he said.

The fires were particularly severe in the southwestern province of Balochistan, destroying swaths of pine-nut forests and other vegetation, not far from areas now underwater.

Balochistan has received 436% more rain than the 30-year average this monsoon.

The province has seen widespread devastation, including a washing away of key rail and road networks as well as breakdowns in telecommunications and power infrastructure, the meeting was told.

Aid has flowed in from a number of countries, with the first humanitarian assistance flight from France landing on Saturday morning in Islamabad. But Pakistan’s largest charity group has said there were still millions who had not been reached by aid and relief efforts.

Initial estimates of the damage have been put at $10 billion, but surveys are still being conducted along with international organisations.

The United Nations has appealed for $160 million in aid to help tackle what it said was an “unprecedented climate catastrophe” as Pakistan’s navy has fanned out inland to carry out relief operations in areas that resemble a sea.