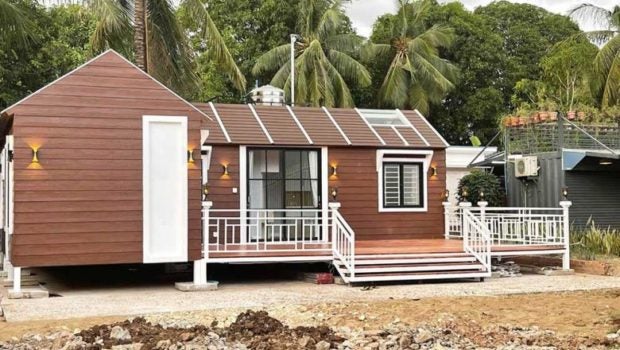 One of VP Mobile Home’s most popular models, built from a design by founder Doung Sophavy. Photo supplied via The Phnom Penh Post/Asia News Network

PHNOM PENH — Duong Sophavy, a local entrepreneur who started out as a wholesale trader and an owner of a Khmer-Thai tour agency, among other businesses in Cambodia and Thailand, is now turning her energies to the mobile home market as they are increasingly being used at resorts, plantations and as bungalows.

It seems that Cambodians tend to want this kind of rustic simplicity now while relaxing. They want to go back towards nature – just not all the way back. Tents or sleeping outdoors, though definitely “back to nature” just don’t seem to have anywhere near the broad appeal.

“It is about my feelings that I had in the mobile home that I used to live in back in Thailand, when I first saw that people had houses like this. I kept imagining that if we could build houses like this in Cambodia, it would be good because we didn’t have it in our country yet,” Sophavy said.

The former owner of a restaurant specialising in Thai cuisine, Sophavy owns and runs the mobile home businesses, which are mostly used in tourist areas, but her construction area is located in Pleung Chheh Roteh commune of Kambol district in Phnom Penh.

At the end of 2018, she got into the mobile home business with the construction of one or two small houses in order to see if it was possible for local craftsmen to build them because she did not hire any builders from Thailand.

“At first we faced some obstacles. First, here there is no mobile home market. Generally, when businesses have no market, they are impossible to get going. The second problem is that some of the craftsmen do not follow my instructions because I am a woman. Sometimes they are stubborn and refuse to follow my orders,” she said.

VP Mobile Home, its brand name, has been in business one year with no established market, but Sophavy said she gave up too many other businesses and new business ideas to pursue this one and she would continue working hard because that’s what she loves and she believes she will succeed.

“My relatives have all told me to stop, telling me ‘that’s enough for your losses, don’t go in too deep’. I told them to stop acting like old women and just kept going,” she said.

Overcoming obstacles like the lack of respect from her builders and the limited mobile home market, Sophavy feels she finally has a clear understanding of the preferences and interests of the local customers.

In 2019, VP Mobile Home and Sophavy gained fame when they built a large mobile villa for a wealthy client, far different from the mobile homes that are common in Thailand, which are smaller.

“We can provide many features in just one villa, including a Sky Bar, four bedrooms, five bathrooms and a living room with a sofa in it. We can say it is a giant house for a mobile home if it is nine metres wide,” Sophavy tells The Post.

Her businesses’ reputation began to grow and the Cambodian people began to recognise her since that job. The mobile villa was bought by her client in Mondulkiri province as their holiday home and it had a transportation cost of $6,000 to bring there, which required the use of five to six trucks.

If you’re thinking that doesn’t sound particularly mobile all things considered, well, try moving a traditionally constructed “non-mobile” stationary home anywhere. It’s often impossible, but when it is possible the costs are exorbitant, the damage to it often extensive and attempts to fit it into the surroundings at its new location.

The giant mobile villa cost $49,500, not including the interior materials and decor – and the interior decor cost more than $30,000 to start out.

When asked why they don’t just build it from scratch on the client’s own land, she said that being able to travel was the main obstacle and that she could not go back and forth very far travelling.

“If we work and stay at one site, we can manage to build 10 houses at the same time. But if we go and build the house in the client’s area, we cannot control the craftsman. They weld poor quality steel, they don’t know how to spray paint very well and it is not easy for us to go back and forth. So we use the technique of breaking the house into several pieces when manufacturing it and then taking from one week to 10 days [at the client’s location],” she said.

She said that the techniques for dismantling and assembling the giant houses are not easy to learn but they are needed at an expert skill level and even the person who taught her about the designs of the mobile houses in Thailand also wanted to buy her mobile house and then haul it back to the country because there the houses were built in smaller sizes with simpler designs and these mobile homes were better quality and perfect to install at farms and plantations.

“But in our country, we only know the interests of customers who need a big and comfortable house. We put their favourite things into the house. That is why they love that house. These big mobile homes are like villas. When we step in, they are equipped with luxury designs like villas,” said Sophavy.

In comparison to homes built with foundations in the ground, one can understand why these are different; because the mobile homes can be moved no matter how big they are the builders focus on making each piece be durable enough for repeated transport.

Steel is often used in mobile homes to withstand strong winds, and Sophavy said that most of her houses are installed on hillsides in areas that require a solid foundation.

The entrepreneur said that she is able to build the largest mobile homes according to the customer’s order because she knows the technique of using skeletons and frames and how to break everything into parts and how to assemble them.

“I came up with a plan for how to divide the parts of the house, telling the team to break it down according to delivery by the number of transportation trucks and which parts could be split. We were the designers and the builders just had to do it for us.

“The technique of splitting the house is an important point for the construction of these mobile homes in order to maximise efficiency and minimise costs. It’s difficult because these houses have a lot varying designs,” she tells The Post.

The mobile home building technique typically employs a steel frame and uses all artificial boards, such as fibre boards, which are better than wood in terms of durability because they don’t swell or shrink, won’t decay and are water and heat resistant.

Sor Sokun is a VP Mobile Home VIP customer, having contracted with the business to buy more than 100 mobile homes for his resorts near the mountains of Mondulkiri province

“I have ordered 100 mobile houses from aunty [Sophavy] in stages. For the first stage, we took 21 houses, including one for my family to live in ourselves. All the houses have the same style, with bedrooms, bathrooms, living rooms and kitchens,” Sokun, 23, told The Post.

The owner of Raksa Hill Resort, located 10km from Mondulkiri in O’Raing district, said that many guests who come to stay there often ask about the houses at the resort because they see the attractive look of the homes and want to buy one to install on their plantations.

He claimed that it was no different from a house built on the ground itself. Once in a while one of the units would develop some problem but the owner of VP Mobile Home always sends her men to repair it immediately.

Staying at Raksa Hill Resort, which provides gorgeous views of the mountains and their pastures of lush green grass in the winter season, costs between $80 to $100 per night depending on the season, and up to four or five guests will typically stay in each house.

Sophavy said that she’s designed many houses but has also had them built to a customer’s orders, but only about 10 per cent of the time because her designs are better in at least 90 percent of cases.

For the latest luxury mobile villa, there is a big Sky Bar veranda on it and Sophavy is designing a pool to go in the middle of that veranda for the kids.

Sophavy is also a fashion designer while her son and son-in-law have both graduated with degrees as architects. VP Mobile Home right now is ramping up production and hiring between 40 and 60 more construction workers.

Currently, VP Mobile Home is building another large villa that will be installed on a plot of land measuring nine by 15 metres. The Mobile Villa will cost over $50,000 and the decor in the house will cost another $30,000.

While the installation service is covered by the company, transportation to the site where it will be assembled is the buyer’s obligation because the transport requires the use of large trucks and other large equipment that runs at night.

As to the popularity of mobile houses, Sophavy said that larger houses have a better market for them established than smaller houses because the concept is new in Cambodia and wealthy people are better able to embrace new ideas and try new things since the resources they’ve wasted on it if they decide it is a mistake won’t be catastrophic for them.

“My small houses have a market just for bungalows and small resorts. The $9,500 small holiday house is usually ordered by a few clients, maybe about five percent. Most of my patrons prefer the large mobile homes like villas for more comfortable living,” she said.

Social media users often ask about instalment payments – essentially, some mechanism for mortgages – and she also wants to try to facilitate that, but customers who ask about it often still cannot afford it because of the 50 percent of purchase price deposit with a down payment of $9,500 she currently requires at the outset.

“What I want to take care of is the responsibility for providing skilful services that make customers happy and place their trust in us,” said Sophavy.

In addition to the mobile houses, VP Mobile Home plans to expand their offerings to include both mobile offices and mobile cafes of several different designs and floor plans.

Mobile and modular houses: What if you could just add an extra room when you need more space?

The evolution of Philippine housing