Understanding rats: Why they win most of the time | Inquirer News

Understanding rats: Why they win most of the time 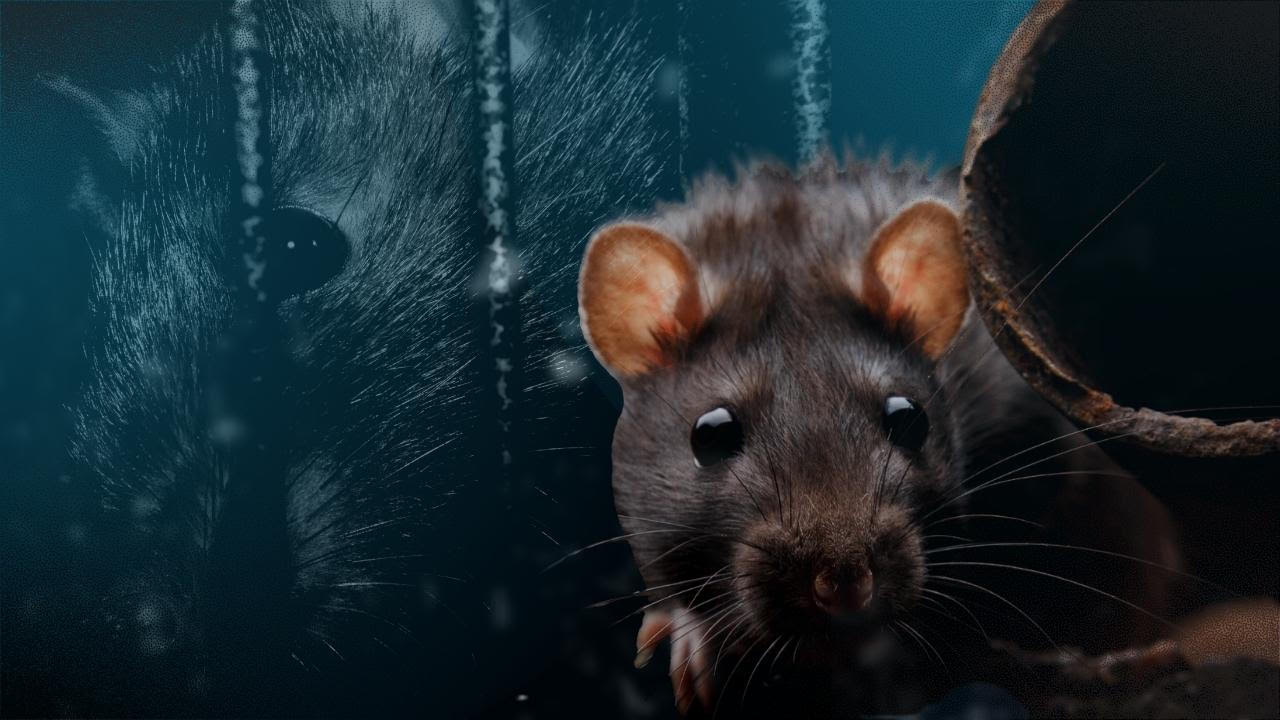 MANILA, Philippines—As early as 1955, rats have been considered the “most destructive agricultural pest” in the Philippines, prompting then President Ramon Magsaysay to sign Proclamation No. 179.

Issued on Aug. 11, 1955, the proclamation declared September of every year as Anti-Rat Campaign Month, stressing that concerted efforts by Filipinos and the government are necessary to control rat infestation.

READ: DID YOU KNOW: September is Anti-Rat Campaign Month

Magsaysay then directed all local government officials to initiate a “thorough” anti-rat campaign in the communities and to make available their resources to fulfill the mandate of Proclamation No. 179.

This, as based on a study conducted by the Rodent Research Center of the University of the Philippines-Los Baños, 20 to 200 rats are found in every hectare of mature rice fields.

Michael Fall, of the Denver Wildlife Research Center, said many species of rats damage rice throughout its growing period and even cause waste and contamination while the rice is in storage.

“They cut or pull recently transplanted seedlings from the ground, and cut or open growing stems (tillers) to reach the developing heads. When the grain heads have developed, rats cut or pull down plants to eat the grain,” he said.

In 2016, close to P13 million worth of agricultural crops were lost because of rat infestation that hit eight of 24 barangays in Kabacan, Cotabato, with the local government saying that 400 farmers had suffered heavy losses. 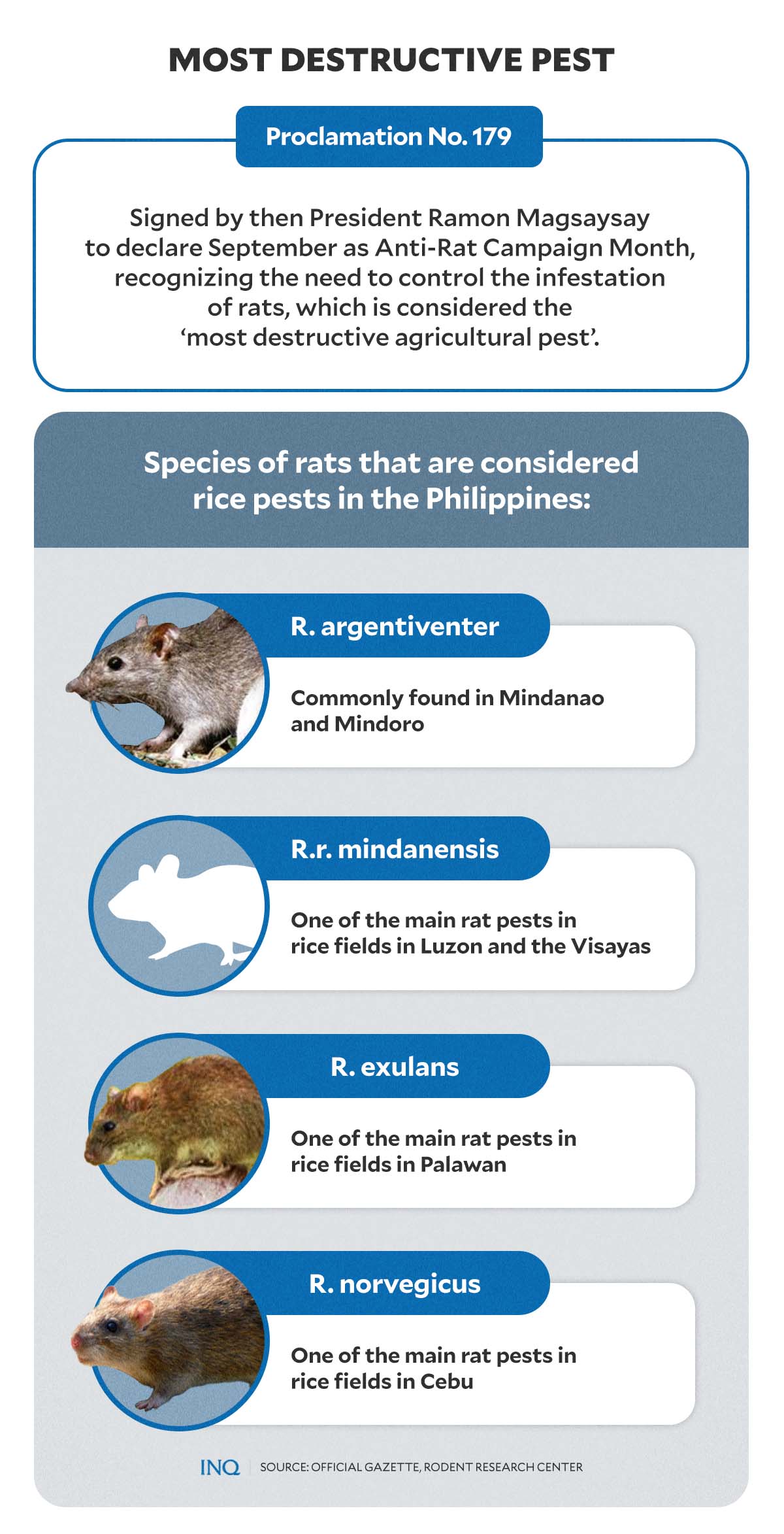 Based on the study “Impacts of Rodents on Rice Production in Asia,” five to 10 percent of rice crops are lost to rat infestation in Asia every year, stressing, however, that over the last few decades, losses had risen to 20 to 30 percent.

RELATED STORY: P13M worth of crops lost due to rat infestation in 8 North Cotabato villages

The five percent loss in rice production, it said, is equivalent to 30 million tons, which is already enough to feed 180 million people for 12 months. Post-harvest losses could possibly be of the same magnitude.

While Proclamation No. 79 only cited the agricultural damage that rats bring, a potentially deadly disease—leptospirosis—has persisted as a threat to the lives of millions of Filipinos.

READ: Leptospirosis: A scourge that comes with rains, floods

The US Centers for Disease Control and Prevention (CDC) said leptospirosis is a bacterial disease that affects humans and animals. It is caused by the bacterium Leptospira, which can be carried by wild and domestic animals, like rodents.

“Infected animals may continue to excrete the bacteria into the environment continuously or every once in a while for a few months up to several years,” the CDC said.

Without treatment, the disease can lead to kidney damage, meningitis (inflammation of the membrane around the brain and spinal cord), liver failure, respiratory distress, and even death.

It explained that the bacteria can enter the body through the skin, especially if there’s a break in the skin caused by a cut or scratch. It can also enter through the mucous membranes or the eyes, nose, or mouth. 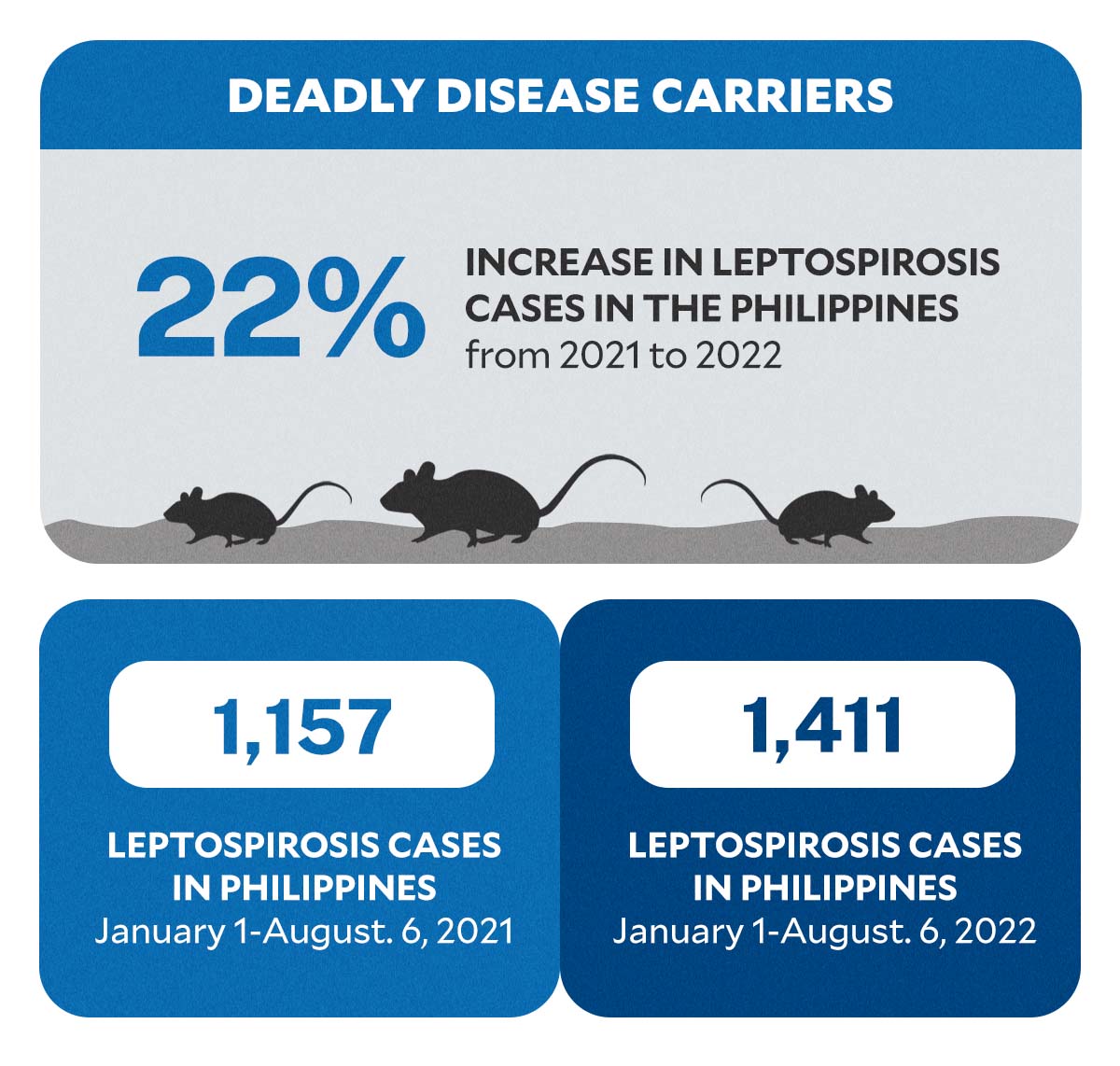 Last month, the Department of Health (DOH) said 1,411 leptospirosis cases were recorded from Jan. 1 to Aug. 6 this year. This translated to a 22 percent increase from 1,157 in the same period last year. 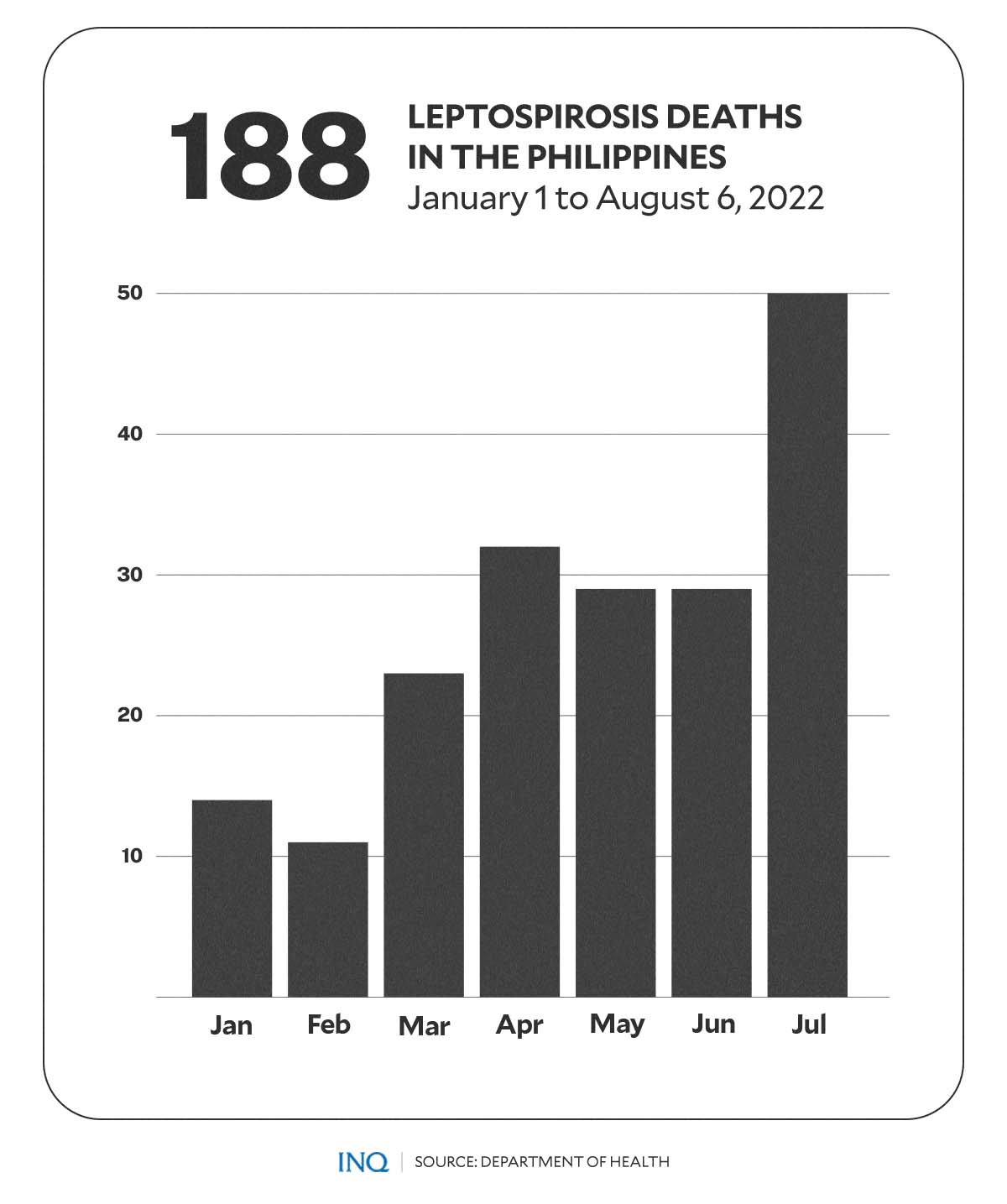 Fall said in his study “Rodents in Tropical Rice” that there are more than 6,000 different kinds of rodents and almost 600 of these belong to the genus Rattus, which is often called “rats”.

He explained that Rattus argentiventer happens to be the main rice pest in Southeast Asia and that in the Philippines, most have been found only in the islands of Mindanao and Mindoro, where they are the dominant rice field species. 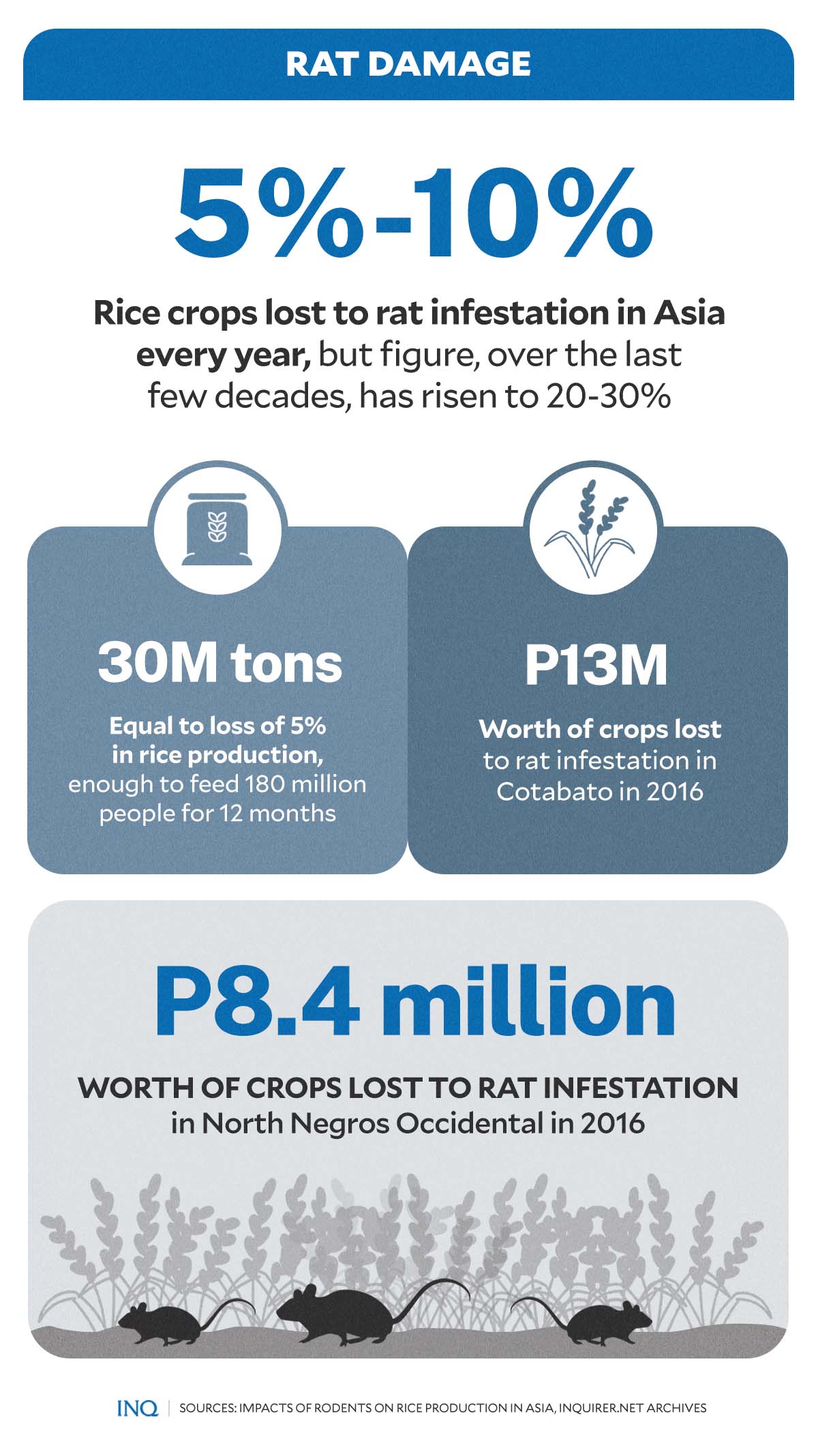 Rattus rattus mindanensis is a “highly adaptable rat” that is often located in several habitats and damages a variety of crops. It is also a common occupant of houses and storage areas and is the main rice pest in Luzon and the Visayas.

Rattus exulans and Rattus norvegicus are widely distributed in Southeast Asia and are found throughout the Philippines, especially in Palawan and Cebu. They often occur in small numbers in rice fields.

Fall said out of the more than 30 species of rodents in the Philippines, most live in forested or mountainous areas and are only rarely found in lowland fields, however, in some Southeast Asian nations, several species are considered rice pests.

“Often, several species of rodents may inhabit the same field simultaneously, raising the possibility that control methods which are too selective could lead to population increases of one or more of the competing species,” he said.

This was the reason that leptospirosis, the World Health Organization and CDC said, is a disease that can be an “occupational hazard” for people who work outside and have contact with animals, like rats infected by Leptospira.

Because of threats posed by rats, some local government units (LGUs) have initiated efforts to control rat infestation and mitigate the risk of leptospirosis, especially when there are heavy rains.

One of the most known initiatives is the “cash for rats,” where residents are asked to hunt rats—dead or alive—and exchange them for cash.

In San Luis, Pampanga, the first days of the program resulted in the killing of 4,277 rats, enabling residents, especially farmers to collect P21,835 worth of reward from the P1 million that was allocated by the LGU for the program.

READ: ‘Cash for rats’ drive in Pampanga town off to good start with at least 4,000 rodents dead

But while the idea of exchanging rats for cash is novel, it could eventually have bad consequences, like what happened in India in the 19th century.

The website EcoNowMics said it was in the 19th century when the British colonial government, because of the growing population of venomous snakes, offered a reward for every cobra caught.

However, while it was initially successful, it eventually backfired as “locals figured they would breed cobras and sell them to the government instead of catching cobras”.

“Another instance of this phenomenon happened during the occupation of Vietnam by France. City of Hanoi in Vietnam was filled with rats. Similarly, a bounty program was offered for every dead rat,” it said.

“Here, people would get paid for providing rat tails as evidence. Again, people began breeding mice. Moreover, they did not kill rats and just cut their tails as proof, and the tail-less rats were then released to reproduce and increase revenues for those involved.”

The website livescience.com explained that rats, generally, are “baby-making machines” as female rats can mate around 500 times in six hours and that brown rats can produce 2,000 offspring a year.

The Encyclopedia Britannica said rats start breeding as early as five weeks of age and continue until about age two and that female rats are fertile approximately every three weeks.

The pregnancy usually lasts about three weeks, and the result typically ranges from 6 to 20 babies. Female rats are able to conceive within 48 hours after giving birth.

This was the reason that snakes, as natural predators, should be protected, with the website Home Guides saying that while people are often fearful of snakes, the reptile plays a significant part in a healthy ecosystem. 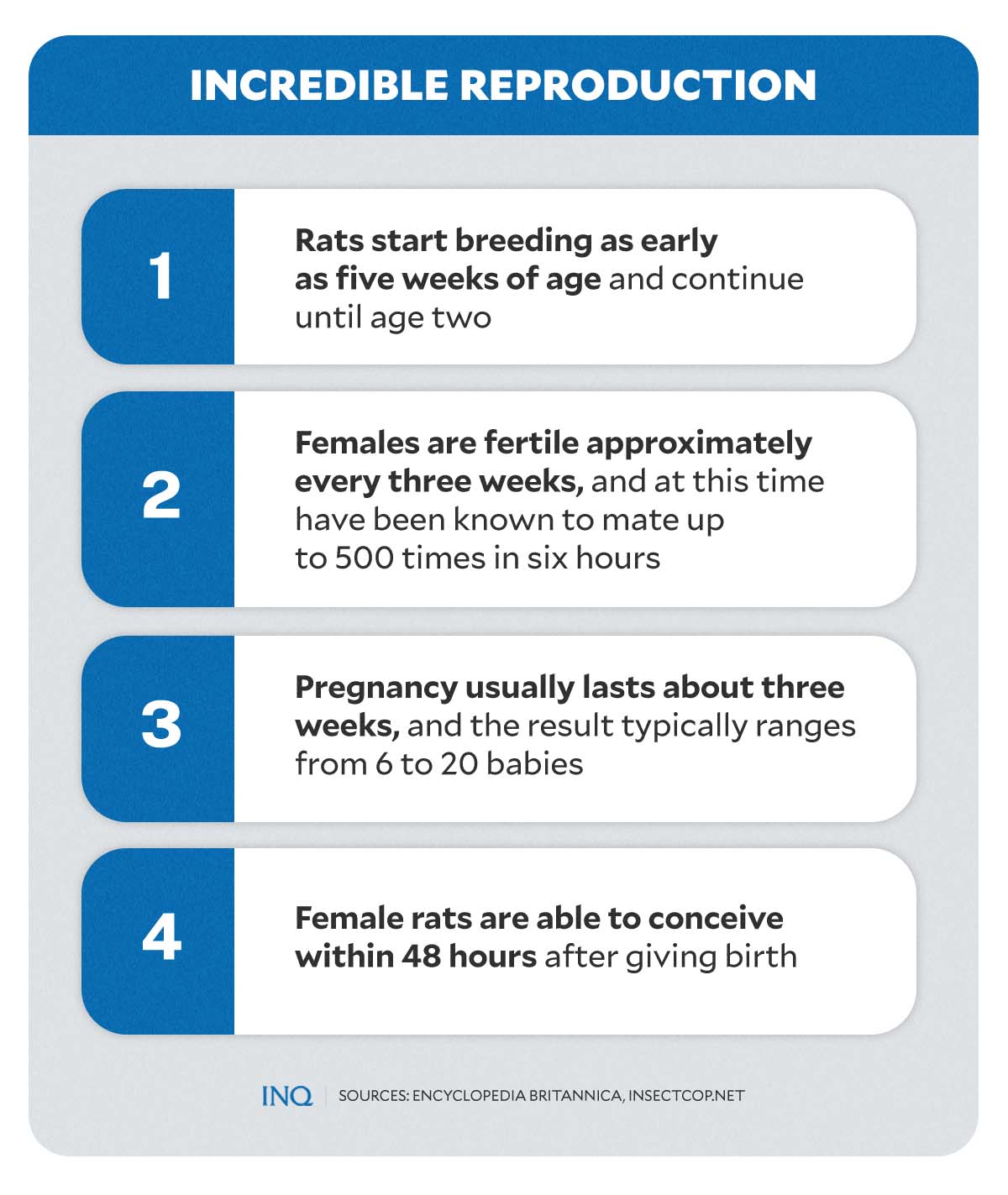 “While most snakes are non-venomous and present no danger to humans, they effectively keep populations of rats, mice and other rodents in check. All snakes are carnivorous and many eat as often as once every three to four days,” it said.

“Without snakes to control populations, rodents would reproduce freely, soon growing out of control. Snakes are significant allies of farmers and gardeners, decreasing the rodent population in fields, gardens, barns and grain storage facilities.”

Getting rid of rats

But while it is hard to completely eradicate rats, there are ways to get rid of them inside homes, where they leave signs such as droppings, rub marks, scratching noises, holes, nests, and footprints.