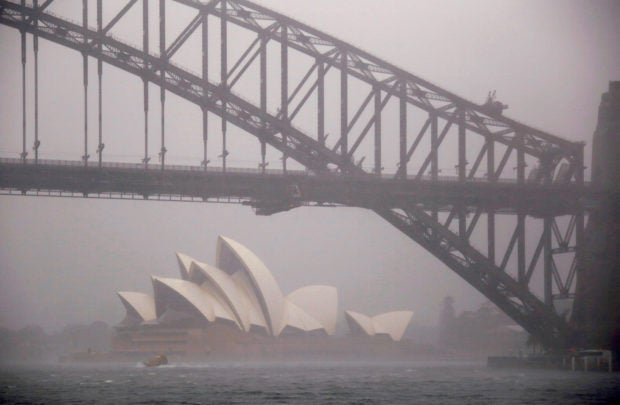 A boat passes under the Sydney Harbour Bridge and in front of the Sydney Opera House as strong winds and heavy rain hit the city of Sydney, Australia, November 28, 2018. REUTERS FILE PHOTO

SYDNEY — Much of Australia will face unusually heavy rains in coming months, the country’s weather forecaster said on Tuesday, after confirming that a La Niña weather event is under way for the third year in a row and would likely last into next year.

The Bureau of Meteorology firmed up its guidance for this year for the weather pattern known in Australia to produce wet, windy summers, saying it was now under way after it previously had forecast a high chance.

The warning puts the country’s densely populated east coast on alert when many residents are still rebuilding after floods linked to the most recent La Niña which ran into early 2022.

The weather phenomenon was among factors that would “push Australia’s climate towards a wetter phase and … have shaped our outlook for the coming months that shows more than 80% chance of above average rainfall for many parts of the eastern half of Australia”, the bureau said in a statement.

Wild weather swings in Australia brought its worst bushfires in a generation in late 2019 and early 2020, followed by two La Niña patterns which swelled rivers beyond their banks and left thousands of flooded homes uninhabitable.

“This is not good news for communities, businesses, homeowners, and renters who are living or operating out of buildings and dwellings that are at risk from inundation,” said Mark Gibbs, an adjunct professor with Queensland University of Technology’s Institute for Future Environments.

“This may be particularly problematic for those that are still recovering from recent floods, especially in light of the present challenges in securing the services of builders and building suppliers,” he added.

With La Niña, sea surface temperatures in the eastern Pacific Ocean are cooler than normal while waters in the western tropical Pacific are warmer than normal, generating moisture that brings rain to eastern and central Australia.